After determining that Brian Helgeland was responsible for the scene I loved in ASSASSINS I thought I should watch one of his movies that I haven’t seen before. But not his new one (the remaking of Pelham One Two Three) because life is too short for new Tony Scott movies.

So I went way back to this VHS-only cult oddity from Ate de Jong, director of DROP DEAD FRED. This is actually Helgeland’s last credit before ASSASSINS, but it came out back in 1991, when he was still considered a horror guy, having done NIGHTMARE ON ELM STREET 4, 976-EVIL, and some episodes of FRIDAY THE 13TH: THE SERIES. 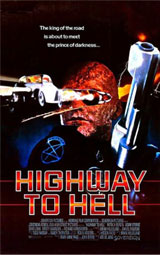 It’s the story of two kids on the road to Vegas, where they plan to elope. Despite mysterious warnings from a gas station attendant (Richard Farnsworth) they stop at the wrong place on the backroads and the girl, Kristy Swanson, is taken into custody by a Hellcop – an officer of the law who has crossed over from the inferno. His face is burnt and ritualistically carved and his uniform has pentagram patches on it. His handcuffs are a pair of living severed hands connected by a chain. I’m glad our cops aren’t allowed to use those, last thing we needed back then was another pair of hands beating on Rodney King.

Farnsworth has a history with the Hellpigs so he gives the groom tips and equipment to go into Hell and get his fiancee back. So far so good. The trouble is that the groom, as played by Chad Lowe, is a complete weiner. He’s supposed to be some kind of everynerd I think, but he’s just such a whiny bitch you want to gag him and drive him to the Helljail yourself. The idea is pretty good, the direction is passable, but Lowe and Swanson just don’t have enough screen presence or charisma to pull it off. You do not feel compelled to watch these people. They make it seem like an episode of some okay-but-forgettable horror TV anthology series that you figure would be better if they had the cast and budget of a real movie. Come to think of it, those shows did have alot of old timey gas stations and diners in the middle of nowhere.

But forget about those two, the star of the show is the world it takes place in, the goofy depiction of Hell. Some of the humor reminded me of BEETLEJUICE, the way they have cartoonish jobs people do in the afterlife. Hell has celebrities (Gilbert Gottfried as Hitler) and some kind of municipal government. Most of the locals are Road Warrior types or crazies, like young Ben Stiller as a guy at a diner who pressures people to eat the roadkill he barbecues. (Stiller also plays Atilla the Hun. And his dad is in it too.) There seems to be only one Hellcop, but there are a whole bunch of Andy Warhols directing traffic for some reason.

Then our weiner hero meets a cool, nice guy who offers to help him out, and for some reason he’s not suspicious. And the guy’s name is Beezel! For fuck’s sake, horror movie people! You gotta look out for these devil names, especially when you’re in Hell. It’s just common sense. Here are a few of the names to avoid:

Also, any of these names backwards. Avoid contact and especially bargains or agreements. A handshake does constitute an oral contract. Also, an accidental drop of blood on a contract counts as a binding signature according to the GHOST RIDER precedent.

This is not a good movie, but there’s enough good and unusual stuff in there that I thought it was worth my time. I especially like that the Hellcop is treated as a serious horror villain, despite the movie having alot of jokes in it. And I like that he doesn’t talk. He’s a silly idea but he works, drawing on our instinctive fear of cops and authority figures. You know when you get pulled over and you see that cop walking toward you, you haven’t heard a voice yet and you don’t know what he wants, he’s kind of a scarier figure then? That’s what the Hellcop is for the whole movie, except demonic. Also he’s funny because he causes Chad Lowe to accidentally pull a gun on a real cop in the real world. Whoops! That’s gonna be hard to live down. Good luck, weiner.

Brian Helgeland
This entry was posted on Thursday, June 11th, 2009 at 7:18 pm and is filed under Horror, Reviews. You can follow any responses to this entry through the RSS 2.0 feed. You can skip to the end and leave a response. Pinging is currently not allowed.

6 Responses to “Highway To Hell”