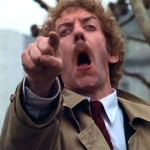 So you kind of know right away that this is not gonna be a masterpiece. Either Hirschbeigel’s movie sucked – in which case they’re not gonna be able to fix it just by adding some Wachowski here and there – or maybe the movie was good and Joel Silver just didn’t get it, in which case, fuck. I guess the best thing you can wish for is an ISLAND OF DR. MOREAU where it’s completely crazy anyway and the turmoil probaly added to the magic. (But even in that case the director was replaced after a few days, not after the movie was already done.)

What we get is not a best or worst case scenario, it’s in between. The movie is not good. But it’s pretty fun. They get some mileage from all the things that make the body snatcher concept so creepy: emotionless people walking around like zombies, mindless hordes that you can’t hide from, not always knowing at a glance who’s on your team, knowing you or your loved ones could be next. This version of the story centers on a psychiatrist played by Nicole Kidman, her best friend/doctor played by Daniel Craig, and her son, played by some kid with a bowl cut. Also the great Jeffrey Wright is in there in a generic role as a scientist friend. Unless he is really that CIA agent he played in CASINO ROYALE and he is trailing Bond who is undercover as a doctor while investigating this invasion. If that is the case they should’ve spelled it out more clearly, I didn’t get it.

One thing I appreciate that you don’t usually get in studio genre movies: the shit hits the fan right at the beginning. In the opening scenes we learn of a space shuttle crash, that the debris may be contaminated, and minutes in we are already seeing people who seem to be snatched. It’s a virus that infects you, then when you fall asleep your face grows over with some kind of mucus and you become part of the hive mind by the time you wake up. The hive mind has some kinks to work out though because they are not able to detect the unsnatched walking among them if they act emotionless and avoid excessive sweat.

The bodysnatching is passed like a disease or a 28 DAYS LATER. They puke slime in your face. They are slimepukers. See, it’s a TOTALLY DIFFERENT new take for the post 9-11 world. No pods. IT WILL BLOW YOUR MIND.

The crowd I saw it with laughed alot, sometimes with but sometimes I think at the movie. Nicole Kidman does as good as always, but it’s kind of hard to take her seriously as an everywoman, the surrogate for all humanity. I mean, they just don’t make too many women who look like that. And she doesn’t get too mussed up even though she spends a good chunk of the movie running and fighting while wearing a nice turtleneck sweater, a skirt, pumps, and, from the looks of it, a Wonderbra. I’m probaly a sexist jerk for bringing it up, but those things were distracting in this movie. Later when she gets a chance to change into better alien-fighting clothes, the boobs are still prominent. And then at the end, when everything is better (SPOILER), she changes back into the sweater and skirt. To show that America is not afraid.

Although there was some laughing you also can’t deny that there were alot of effective scares. My favorite scene was when a dude showed up at her door late at night claiming he was from the census bureau. There’s also a good scene where a dog attacks a little bodysnatcher kid. Maybe I’m just a sucker for this type of concept, but I think alot of people are. If you’re going to hold it up to the other versions of the story, which would be reasonable, it won’t hold water. But if you’re able to just watch it as kind of a lesser TWILIGHT ZONE type story it has its charms.

But its main problem is that it’s too easy. It’s short, about 90 minutes, and during this time the whole world is taken over and then untaken over. The heroes figure out who is immune and why in the course of a brief conversation, they speak a bunch of show-offy lingo and then all the sudden they’ve developed a cure off screen. And of course the kid is one of those plucky movie kids who never cries or freaks out, he knows how to stay calm and with it. Part of the creepiness is that you can’t trust anyone, but in this case it turns out you can trust the government scientists, somehow they are safe and have no setbacks at all. Also, I gotta be honest, it would’ve felt more earned if there was some blood. Nicole kills 7 or 8 people, tosses a little kid (wonder if she’s seen WHO CAN KILL A CHILD?) and hammers a guy in the head, but none of it is really shown and none of it really gets you in the stomach. Or at least me. But nice try.

What I’m saying is you gotta earn a cure. These slimepukers pretty much give it to them. They are not good invaders. They suck. So it’s a little anticlimactic.

I’m not sure what the deal is with the Wachowskifying of the movie, but I bet it didn’t improve much. My guess is that the German guy made a more subtle and intimate story that didn’t spell out what was going on in the rest of the world, and the Wachowskis added in the news reports above the virus and the heavy-handed ending where Jeffrey Wright practically looks into the camera, makes eye contact with you, calls you by your full name and explains the ironic ending to you, complete with a question and answer period, followups allowed.

The style of the movie is also a little schizophrenic, I don’t know if that’s by design or from too many cooks. Most of it remains calm, but uses alot of uncomfortable closeups to make you fear what’s going on outside of your view. But in certain scenes it goes to a frantic editing style jumping back and forth in time, using quick cuts of microscopic views of the virus and even throwing in some of the dreaded Avid farts. It’s not bad though and I even kind of liked the end credits, which zoom through a CGI rendition of some cells or something. This type of thing has never been done before except in FIGHT CLUB, the X-MEN movies, HULK and I think maybe one of the GARFIELD movies.

You want SPOILERS, here is a SPOILERS. The Body Snatchers stories have always had political subtext, or at least have been read that way. The modern take is that the slimepukers are unified and are able to create world peace. We hear news reports about various conflicts around the world being resolved. They actually make a pretty good argument, the one and only catch is that they’re gonna kill Nicole’s son, because he’s immune. And also there’s a reference to “President Al-Sadr” in Iraq, but since it is a slimepuker Al-Sadr and not the original guy I think we can let it go. Anyway, the movie ends with Daniel Craig reading a newspaper about the mess in Iraq and Kidman remembering something she heard earlier about how if we didn’t have war and crime and shit we wouldn’t be human.

To be frankly honest I’m not sure what Hirschbeigel/Kajganich/McTeigue/Wachowski/Wachowski (from here on referred to as ‘Joel Silver’) were going for here. Is she supposed to be thinking “Shit, maybe I shouldn’t have stopped The Invasion”? Or is it saying, “We’re only human, you can’t blame us for fucking up the world, there’s no sense in trying to do better”? Or maybe it’s supposed to be ambiguous. I just hope it’s not option B, because that’s a depressingly cynical excuse for human failure and laziness. I dare you to try that one on Morpheus. That man killed an SUV with a sword, how dare you disrespect him like that. Besides, if humanity is so bad at getting along then how the hell did the US government so quickly and easily put together an uninfected scientific super-team and cure most of the world in the span of one short montage? I guess it figures that the one and only time the Bush government worked like a well-oiled machine would be the time they were stopping aliens from creating world peace and harmony.

So anyway, if you were expecting a hilarious disaster of Nic Cage proportions, no luck. If you’re hoping for topnotch intelligent sci-fi, well, its not that either. But it’s fairly unsettling, it’s hard to hate this cast and like I said, she tosses a kid in one part. You could do worse.

aliens Daniel Craig Nicole Kidman remakes Wachowskis
This entry was posted on Wednesday, August 15th, 2007 at 3:49 am and is filed under AICN, Horror, Reviews, Science Fiction and Space Shit, Thriller. You can follow any responses to this entry through the RSS 2.0 feed. You can skip to the end and leave a response. Pinging is currently not allowed.