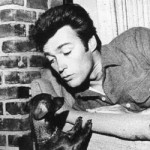 Well now I’ve finally caught up with it and although it’s not an outstanding new high for Clint like FEMME FATALE is for Brian DePalma, there is nothing wrong with it at all. In fact any fan of Badass Cinema owes it to themselves to see it as one of the only american pictures relevant to our genre this year. It’s an old school cop thriller but for some reason it reminded me most of IN THE LINE OF FIRE. I think one reason Clint has stayed relevant (well, up until now I guess since nobody saw this one) is because he acts his age. He doesn’t pretend to be a young man even if he’s kissing gals who are younger than him. He is very conscious of being an old man.

So like IN THE LINE OF FIRE his age and health is a big part of the story. It’s based on a novel and apparently Clint had Helgeland write in more health troubles than in the book in order to fit his age better. Chasing down some asshole serial killer, Clint collapses. We cut to a couple years later and he is recovering from a heart transplant. So he’s retired.

But wait! You know he’s going to have to get back in the game somehow. What happens is a young gal tracks him down at his houseboat and shows him a picture of her murdered sister. The sister was an organ donor and this gal has figured out from articles that Clint had to have received her sister’s heart. So she guilts him into looking into this dormant case and seeing if he can solve it.

Of course he ends up getting a little more involved than he wants to. And I don’t want to give anything away but he MAY end up solving the crime. I’m not gonna say whether he does or not definitively but just understand that it IS a possibility that the movie will be about him catching this murderer. Anyway he is sort of a cop because he has all these connections and experience but he is also sort of an outlaw/vigilante because he’s not licensed as a PI and he has to go around asking for favors or misleading people to think he is still a cop.

But the real gimmick is his health. People keep worrying about him, telling him he looks sick and what not. As he gets closer to the killer you worry that he’s going to keel over if he gets in a confrontation. In fact we have it on good word from his heart specialist that he should be staying at home resting, and not working on his boat too much, or his body might reject the transplant. Instead he’s running around trying to fight crime. Sometimes you even hear his heart beat on the soundtrack but you don’t even need that to worry about him. His hair is so grey now, and his voice is so hoarse, and he keeps sweating. In fact I was kind of sad watching this movie, getting that feeling where you know this guy is not going to be around too much longer. He’s not going to be making too many more movies. I mean Clint is getting old.

Luckily I watched the making of documentary and was relieved to see that Clint looks and sounds about 10-15 years younger in real life… he’s actually playing OLDER for the movie. That’s my Clint.

So the story is just ungeneric enough to work and the filmatism of course is solid and effective since it’s Clint’s. No modern bullshit like quick cuts and pop music and he never flies up in the air and does a flip or nothing like that. I noticed one clever filmatic innovation that is a twist on the negative flashes you alway see in the serial killer movies, or at least in the trailers for them. You know what I’m talking about? They show the killer with an evil look on his face and then there’s like a camera flash sound or a whoooosh and for a second you see a negative image of the same shot. Well Clint decided to do the exact opposite, he did an entire nightmare sequence in negative with occasional quick flashes of positive. And it’s much more interesting the backwards way.

There’s also one great badass setpiece, one for the record books. Just pure adrenaline rush badass like when he jumps onto that bus in Dirty Harry or when he foils a bank robbery while eating a hot dog. This time he’s getting in the car with his cop friend and he notices in the rearview mirror a parked car watching them. Instead of telling his friend what’s going on he tells her he needs to put his bag in the trunk. So he gets out, steals her shotgun out of the trunk and starts walking across the street towards the parked car as he cocks it. This is the Oh Shit It’s On Moment. Even if the rest of the movie was pure shit it would’ve been worth watching it for this scene.

Also you gotta hand it to the cast. Because it’s Clint, he’s able to get big name actors in parts they might otherwise turn down. You got Jeff Daniels from that weird ass goose movie playing Clint’s neighbor, sort of his comic relief sidekick who drives him around and claims to be his partner. And more impressive you got Angelica Huston playing his doctor. This is a really good supporting role, but it’s just a doctor. She’s not the love interest or nothing. I’m telling you if it was somebody besides Clint Angelica Huston would not have done the role. But she did and it really adds some weight to the movie I think. Good job Angelica.

You know, a long time ago I remember seeing Jeff Daniels on some talk show talking about the scene in DUMB AND DUMBER where he is humiliated by diarhea in a show house where the toilet turns out to not be hooked up to plumbing. And he told this story about how Clint Eastwood came up to him at a party and told him that scene was hilarious because it had happened to him. I wonder if that’s why he chose Jeff Daniels for this movie. Don’t worry there is no diarhea I just can’t help but think maybe that’s why he chose him. Some kind of bonding.

Anyway the one actor I don’t like in the movie is fuckin Paul Rodriguez, that obnoxious comedian who you can never really figure out how he got famous, since all he is supposed to do is be funny and he can’t even do that. I remember a while back he was criticizing the Taco Bell pooch as being a racist stereotype. I don’t necessarily disagree with that but how are people supposed to take that seriously from a comedian whose entire act is “Ha ha, look at me, I’m Mexican! Get it? Mexican.” I swear to christ, you can check if you don’t believe me, on the making of documentary on the dvd he describes his character as having “a chip on his shoulder. A corn chip.”

Anyway Mr. Rodriguez plays a wisecracking cop and in the opening scene he keeps making bad puns about a murder scene and you’re thinking, uh oh. Fortunately he’s not Clint’s partner or anything – in fact, Clint hates the guy, he’s supposed to be an asshole, and he never gets redeemed. So I guess that makes it okay that he’s in the movie. It turns out okay.

Jazz factor: in this one Clint does not play an instrument or collect jazz records. There is not room on his boat for a piano. However the opening credits are accompanied by some jazz music.

Anjelica Huston Brian Helgeland Clint Eastwood Jeff Daniels
This entry was posted on Saturday, August 10th, 2002 at 2:51 pm and is filed under Action, Crime, Mystery, Reviews, Thriller. You can follow any responses to this entry through the RSS 2.0 feed. You can skip to the end and leave a response. Pinging is currently not allowed.