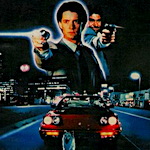 It does put him in the hospital, where a doctor is offended by how the detectives talk about this seriously injured patient. It probly makes more sense to him after Detective Willis (Ed O’Ross, LETHAL WEAPON, FULL METAL JACKET, ACTION JACKSON, RED HEAT) spews a monologue about all the murders, injuries and robberies the guy is responsible for, ending with, “Six of the ones he killed he carved up with a butcher knife. Two of them were kids. He did all that in two weeks. If anybody deserves to go that way it sure to hell was him.” END_OF_DOCUMENT_TOKEN_TO_BE_REPLACED