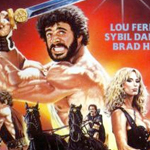 They find Han (Lou Ferrigno, also in his first movie, though he’d already done six seasons of The Incredible Hulk), a gladiator who is said to be immortal, but it’s not really explained very well. I guess he’s not strong or immortal enough to do it on his own, so he has to put together a team which includes some gladiator friends and a badass cynical mercenary lady named Julia (Sybil Danning, who had already been in the space version of SEVEN SAMURAI, BATTLE BEYOND THE STARS). END_OF_DOCUMENT_TOKEN_TO_BE_REPLACED