This is the first FAST movie since 2003’s 2 FAST 2 FURIOUS that’s not written by Chris Morgan, instead being credited to Daniel Casey (KIN) & director Justin Lin (HOLLYWOOD ADVENTURES) with a story by those two & Alfredo Botello (uncredited revisions on TOKYO DRIFT). They’ve come up with a patchwork that certainly shows the dangers of a movie series going on for twenty years with at least half that time spent trying to top itself in size and ridiculousness each time out. But for me it has a much better balance of preposterous action and sincere melodrama than, at the very least, HOBBS & SHAW and FATE OF THE FURIOUS. It has more and better spectacle than your average movie, but also requires that you like the characters and themes of the series to enjoy it. In fact, in between a car somehow Tarzan-swinging across cliffs on a rope and another one being (as you’ve surely heard) launched into space, you’re gonna spend a surprising amount of time in 1989 when Dominic Toretto’s dad (J.D. Pardo, THE TWILIGHT SAGA: BREAKING DAWN PART 2, SNITCH) was killed in a racing accident and Dom went to prison for beating another driver (Jim Parrack, FURY) with a wrench. END_OF_DOCUMENT_TOKEN_TO_BE_REPLACED 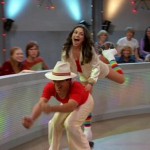 Now if you are new around here you may not be familiar with me, I should probaly specify that I am not some pedophile or somebody, and personally I have never reviewed a movie about kids rollerskating before. ROLLERBALL was strictly adults and so was DERBY. I’m a first timer here for this type of material is what I’m saying, and don’t worry I won’t make it a habit. END_OF_DOCUMENT_TOKEN_TO_BE_REPLACED