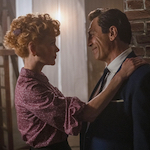 Because this is Sorkin, and a movie, it’s about how a beloved American icon could’ve been taken down by the red scare, but it’s also about the nature of comedy genius, the struggle for artistic freedom, workplace dynamics, and marital strife. Sorkin piles on the separate events of Lucy telling the network she’s pregnant and of discovering Desi’s infidelity, leading to the end of their glorified-on-television marriage. I spent the whole movie thinking “These couldn’t possibly have happened in the same week, could they?” and of course no, they did not. (He also changed which episode was being filmed.) END_OF_DOCUMENT_TOKEN_TO_BE_REPLACED 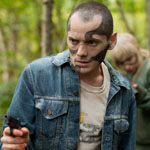 But it comes a little closer than the other two movies to straight up embracing its genre. It even uses the always enjoyable action movie move of one of the band members getting referred to as “Jiujitsu” and then it turns out he really is a practicioner of said martial art. His armlocks and chokeholds come in handy. END_OF_DOCUMENT_TOKEN_TO_BE_REPLACED