VESPER is a unique 2022 sci-fi movie that just came out on video. I never heard of it before but it looked cool, so I rented it. And my hunch was right – it was cool, so now I’m telling you about it. That’s how it works.

It’s a gloomy but hopeful small scale post-apocalyptic tale in an interesting reality. It features dystopian wealth disparity in the tradition of LAND OF THE DEAD, ELYSIUM or FURY ROAD, but in a world that seems a little more influenced by NAUSICAÄ OF THE VALLEY OF THE WIND. At some point in the past there was an ecological crisis, and scientists tried to stave it off with genetic modification, but that backfired. Man-made viruses and plant species spread across the world, wiped out many people and animals, and made the earth useless for growing edible crops.

No problem. Word is oligarchs get to live comfortably in strange structures called citadels, even having manufactured clones called “Jugs” as their loyal servants. But we stay with the poor as they try to survive out in the mud, trading scarce commodities to the citadels for seeds that the fuckers genetically modified to only yield one harvest. Like copy protection. 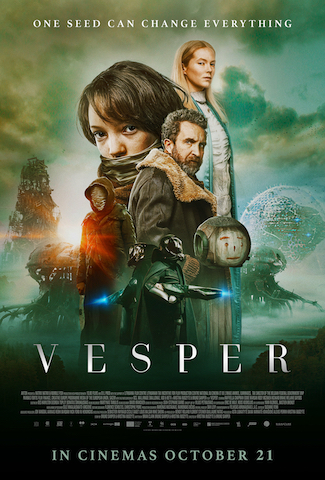 The protagonist is a 13-year-old girl named Vesper (Rafiella Chapman, MISS PEREGRINE’S HOME FOR PECULIAR CHILDREN) who lives in a house out in the woods with her dad, Darius (Richard Brake, THE MUNSTERS). Darius is paralyzed and voiceless, but can speak to Vesper and accompany her in the outside world through a small floating drone with a face crudely drawn onto it. It’s her dad but it comes across as her sad-sack robot companion. Even though the face kinda looks like Kool-Aid Man.

Vesper seems to be some kind of prodigy – she has to know how to maintain and repair the collection of pumps, valves and generators that keep her father alive, and her passion is using imaginatively futuristic lab equipment to study samples of plants and bugs and try to find the secret to unlocking the seeds to basically save the world from rich assholes.

At times it seems like it could be a family friendly adventure, but it’s really not – the dangers are even more upsetting to think about than to watch. Vesper has an uneasy alliance with her uncle Jonas (Eddie Marsan, WRATH OF MAN), who runs a farm settlement with a bunch of creepy boys who don’t mind beating up a little girl, and whose blood he sells to the Citadel for God knows what. Jonas is one of those guys who speaks like he’s trying to sound friendly and reasonable but knows that you know he’s an absolutely irredeemable creep. Still, Vesper is brave enough to sneak in and steal seeds or equipment from him. She also doesn’t seem too afraid of roaming weirdos called Pilgrims, who are silent and weir strange veils and drag around all the junk they find. (Her mom left to join them a year ago. There seems to be debate as to whether they’re a cult or are infected by a virus.)

One day some strange dragonfly-like vehicles fly over the area, and one of them crashes. Vesper finds a survivor, Camellia (Rosy McEwen), and brings her home to nurse back to health. She’s from the citadel, and seems very ignorant of life on the outside, and clueless about her privilege. But there’s more to her story than she reveals at first, and she’s also nice to Vesper and claims she can bring her to the citadel and share their great resources with her.

One problem: motherfuckin Jonas. He finds the glider, with another injured survivor still inside, and kills him right in front of Vesper! And he figures out there was another passenger and starts sniffing around, figures out Vesper is hiding something. And he’s one of those most despicable of movie villains who’s a grown adult man who seems to see a young girl as his grudgingly respected adversary (see also: Matt Schulze in OUT OF REACH). This is low budget compared to most genre stuff we see in theaters (around $5 million) so it stays relatively confined in location and scope, and it doesn’t turn into an action movie or anything. But that makes the story feel fresh, and within these humble means it implies a really imaginative world. I love the idea of the drone, the abstract images Vesper’s machines show her in the cells of seeds, all the strange plants, trees that seem to breathe, and bio-organic technology like the membranes that attach like bandages and heal wounds, or the throbbing slimy thing that turns out to be inside Darius’ drone when Jonas opens it up to “repair” it. The details of the world and the design style remind me more of things I’ve seen in animation than in live action, but it has kind of a dour indie movie tone to it – a unique combination.

VESPER is directed by Kristina Buozyte & Bruno Samper (ABCs OF DEATH 2), who also get a story credit on the screenplay by Brian Clark (COMPULSION). Though it was filmed in Lithuania and the directors are Lithuanian and French respectively, they chose to shoot it in English for international appeal. They use some digital effects, but on location, no green screen, which I think is wise at this budget. It has a very grounded, lived-in feel to it despite the fantastical elements.

As has long been a staple in science fiction, the premise uses a little anti-science paranoia. Just as radiation never really gave us giant crabs, I don’t personally believe genetically modified vegetables are likely to fuck over the world. But rich people controlling crops for pure greed and hoarding, or creating a class of subhumans for servitude – those parts sure do ring true. If human beings will jack up the price of medicine people need to survive, why wouldn’t they do those things? Of course they would. So it’s nice to see a plucky, innocent kid use her wits and talents to defeat them and create a better tomorrow.

VESPER is currently available on blu-ray, DVD, VOD, and streaming on AMC+.

Brian Clark Bruno Samper Eddie Marsan Kristina Buozyte post-apocalypse Rafiella Chapman Richard Brake Rosy McEwen
This entry was posted on Monday, January 23rd, 2023 at 9:35 am and is filed under Reviews, Science Fiction and Space Shit. You can follow any responses to this entry through the RSS 2.0 feed. You can skip to the end and leave a response. Pinging is currently not allowed.