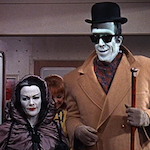 The premise of the movie is that a distant relative dies and Herman inherits a manor called Munster Hall in Shroudshire, England. The family heads to the new place, so there’s a comical boat journey. Herman tries to travel incognito, not because he’s a monster but because he thinks people will make a big deal about seeing Lord Munster. (But he has “LORD MUNSTER” bedazzled on the back of his jacket, which I now know is referenced by Herman’s “ROCK STAR” jacket in the new movie.)

The Munsters’ non-monstery niece Marilyn (Debbie Watson, THE COOL ONES) meets a boy on the boat, a guy named Roger Moresby (Robert Pine, voice of “Duke,” ROVER DANGERFIELD), who she unfortunately falls in love with even though he’s a rich douche who hits on her by making double entendres comparing her body to the stupid rich guy race cars he jerks off to. There’s an ongoing question of whether he’ll ghost her when he meets her family, as the last boy she liked did, and the answer seems clear from his reaction to spotting Herman over her shoulder during a kiss. I don’t like him, but it’s not up to me. I hope it works out for you, Marilyn. 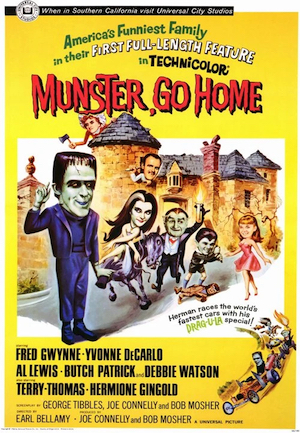 There’s also a whole thing about Herman getting seasick, which leads to Grandpa (Al Lewis, uncredited role as a guard in DEATH WISH, IMDb claims) accidentally turning himself into a wolf (played by a large dog), being forced to stay in a kennel and then having to be snuck through customs disguised as Lily (Yvonne De Carlo, SATAN’S CHEERLEADERS)’s shawl.

In Shroudshire the movie has sort of a MARY POPPINS or 101 DALMATIANS view of English people, and a Scooby-Doo type mystery about “the secret of Munster Hall” and who’s trying to off Herman so they can get his title and riches. The jealous, non-monstery Munsters of England are headed by matriarch Lady Effigie Munster (Hermione Gingold, THE MUSIC MAN), who has apparently so coddled her adult son Freddie (Terry-Thomas, DANGER: DIABOLIK) that he throws tantrums like a little kid and sucks his thumb while sleeping. They also have a mutton-chopped butler called Cruikshank, played by John Carradine. (Horror royalty of the time – kind of like Zombie’s movie having Cassandra Peterson and Dee Wallace.)

Munster Hall is I guess spooky and dusty, but obviously tame compared to what the Munsters are used to. When Eddie (Butch Patrick, THE PHANTOM TOLLBOOTH) first sees it he says, “Weirdsville. What a cuckoo pad!” 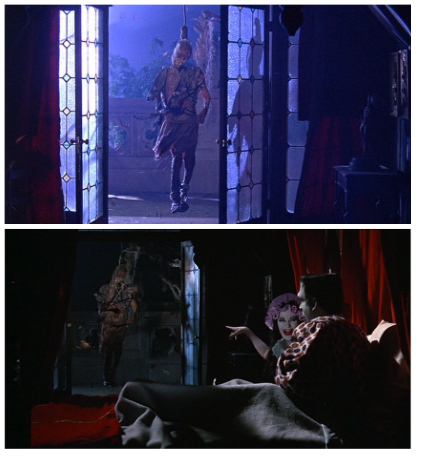 The scheme from the locals leads to what for me is the biggest laugh in the movie: when Herman and Lily’s bedtime is interrupted with animated skeletons and other fake apparitions intended to scare them away, they’re instead absolutely charmed. They keep applauding, like it’s a fun little show being put on for them. “How nice of your family to make us feel so at home!” Lily says.

(And I love how her sleep bonnet resembles an octopus.)

Of course these sitcom/cartoon style gags contrasting human and monster lifestyles are the Munsters’ bread and butter. My favorite is when Eddie asks his mom what a “tomahto” is. She explains that that’s just how they pronounce tomato in England, but why is he asking? That’s what they’re throwing at me, he says, turning to point at the mob of kids tormenting him and revealing the half of him that’s covered in tomato splatter.

The less sense the jokes make, sometimes, the better. One that really got me is the scene where Grandpa is carefully unpeeling a banana during a conversation, then tosses the banana over his shoulder, out the porthole, and starts eating the peel. And I laughed when they were on the boat and it was revealed that Eddie was sleeping inside a drawer, but I think that’s actually a regular thing he does on the show. 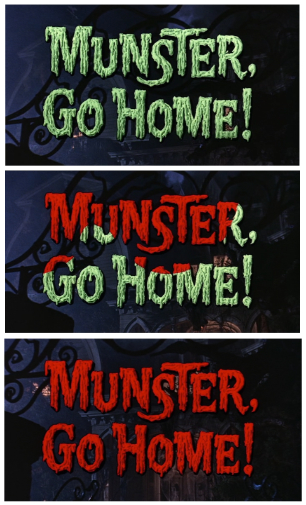 I also liked when they found a secret door and stairway down into the catacombs and Grandpa stopped to admire the quality of the slime on the wall. He makes a mental note to ask where they got it. Speaking of slime, the opening titles start out with slime-green lettering, but then the color red drips down, completely covering them. Do you understand what I’m telling you? This movie is slime covered in blood. That’s intense! It’s not your father’s Munsters logo. This one is extreme!

I don’t know enough about broadcast standards of the time to determine if there’s anything in the movie they couldn’t have gotten away with on TV, but if so it would be the brief shot of Roger checking out Marilyn’s legs, and/or Herman’s comment about “getting stoned” (which to him, of course, means getting bludgeoned to death with rocks).

How do you stretch a sitcom plot like this to feature length, though? Well, you kinda switch up to a different thing for the last act. Herman and Roger both enter a cross country car race, the bad guys try to kill Herman during the race, etc. Herman drives Drag-u-la, the coffin-based custom hot rod from the episode “Hot Rod Herman,” immortalized in Rob Zombie’s 1998 song “Dragula.” Here Grandpa builds it as if it didn’t exist before, so I assume viewers with a passion for continuity went straight to whatever they had instead of the internet back then to send death threats and demand a new cut be released for the fans. How dare they? Boycott Universal.

There are some good visual gags during the car race. One is just the sight of Eddie Munster in a crowd of normal people. Another is that when Herman is about to be run over by a car his reaction is to hold up one finger. Some real Wile E. Coyote shit there. I love it. 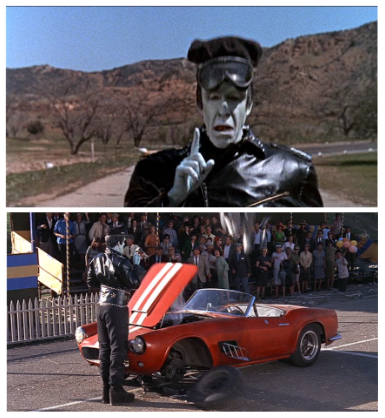 For the studio, from what I’ve read, the idea of the movie was to introduce The Munsters to international audiences (who, like me, weren’t familiar with the drawer joke) to help the show in syndication. I assume fans enjoyed the novelty of seeing The Munsters with a little more production value and outdoor shooting, and (as the poster bragged) in Technicolor. It’s a funny touch, though, that aside from Marilyn and a few of their outfits, the Munsters themselves still appear black and white! 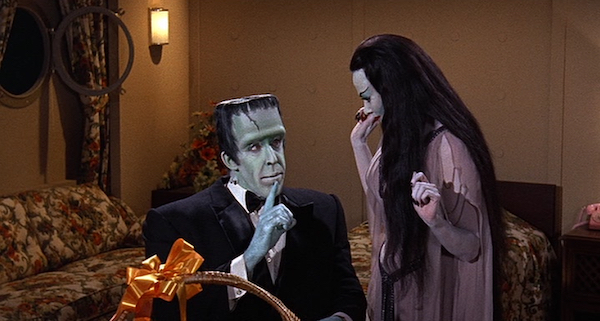 I’m just kidding about fan fury over the Drag-u-la continuity issues, but what reportedly did bother (and/or confuse) fans was Marilyn being recast. Original actress Beverley Owen left the show after 13 episodes, depressed because it forced her to move away from her fiance. Supposedly the second Marilyn, Pat Priest, resembled her enough that many people didn’t notice the switch. But Priest’s big screen replacement Watson was 12 years younger than her. Universal had Watson on contract and were trying to make her a movie star. It didn’t really work. She starred in the TV series Tammy, which was based on the movie TAMMY AND THE BACHELOR starring Debbie Reynolds, but then four episodes of it were re-edited into its own movie called TAMMY AND THE MILLIONAIRE in 1967. She also starred with Roddy McDowall in THE COOL ONES that same year, but after a couple more TV guest appearances she retired from the business.

Oh well. I don’t remember the original Marilyn(s), so I thought she was great. Having not seen the show since I was a kid, the whole idea of the character is new to me, and I love it. The premise that she’s sort of a reverse-goth, that she’s this babe who thinks of herself as ugly because of Transylvania’s different standards of beauty, and just the image of her as the one thing that doesn’t belong in this haunted house world, yet clearly being comfortable there – it all makes me smile. 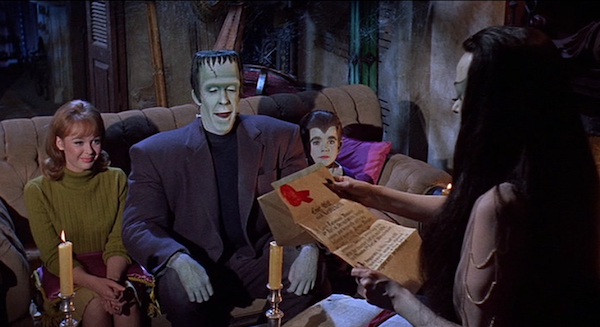 Director Earl Bellamy and writers Joe Connelly, Bob Mosher and George Tibbles were all veterans of the TV show (as well as Leave It to Beaver, one of the wholesome shows it was sort of playing off of). Bellamy was best known for westerns, and mostly for television (Rawhide, The Virginian, Laredo). He went on to direct WALKING TALL PART II as well as shows like Fantasy Island, Hart to Hart and Trapper John, M.D. Connelly and Mosher went on to have a story credit on MAJOR PAYNE. Kinda crazy to realize those eras of comedy are connected.

So yeah, MUNSTER, GO HOME! was never really intended to last, and sure enough it doesn’t transcend being a throwaway TV tie-in. But that doesn’t stop it from being a good time capsule, and for the Munster-curious like myself it makes a pretty good Saturday in October matinee.

Al Lewis Butch Patrick continuation of a TV show Debbie Watson Earl Bellamy Fred Gwynne Hermione Gingold John Carradine Robert Pine Terry-Thomas Yvonne De Carlo
This entry was posted on Thursday, October 6th, 2022 at 12:12 pm and is filed under Comedy/Laffs, Reviews. You can follow any responses to this entry through the RSS 2.0 feed. You can skip to the end and leave a response. Pinging is currently not allowed.