Heavily narrated by Bana, but admirably low on talking head interviews, it shows Bana’s dedication over the years to his “beast” (nickname for the car) and his “mates” (Australian for “homeys” or “doggs”). One of his friends thinks it’s hilarious that he still works on that same damn car even though he has money to buy new ones. And it’s true – he might be the only Marvel super hero still driving his high school car. In ’05 though he decided to sink his money into rebuilding the whole thing into a top of the line race car, then raced it in the Targa for the first time since before he was Chopper. 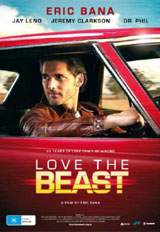 This is not great filmatism, but it’s pretty good. The photography looks nice, there’s some nice Tasmanian scenery and it’s interesting to see the Sydney Melbourne suburb where he grew up, since it pretty much looks like the U.S. There’s even a couple clips from home movies and of him doing standup. The Targa scenes are cool because he hooked up cameras on and inside the Beast so you really see him race. And SPOILER he ends up wrecking, so if you ever wanted to see Eric Bana in a daze right after destroying something he loves dearly, here’s your chance.

The guest star parts are kind of funny because all the sudden he’s on the couch getting psychoanalyzed by Dr. Phil, no explanation offered. He seems to be sincerely trying to get advice from Dr. Phil. Then there’s the part where he’s visiting what looks like a huge car museum but turns out to be one of Jay Leno’s garages. I don’t think it means to make Leno look bad, but their conversation shows a strong contrast between celebrity car lovers. Leno says he doesn’t race because he’s not athletic and doesn’t want to know how bad he is; Bana dreamt about racing since he was a kid and still did it after becoming very successful as an actor. Leno has hangars full of cars and says he always chooses buying a new building over selling one of the cars; Bana just has the one car he obsesses over. He doesn’t need new buildings, unless maybe he likes to park the car in different places to keep its spirits up, nurture its sense of adventure and give it a sense of a life well lived, which is a definite possiblity.

I bet he talks to his cars. You know how some people think talking to their plants make them grow better? Bana seems like a car talker. But that’s not covered in the movie.

Bana gets across the idea that car people can have a strong emotional (Dr. Phil says spiritual) connection to their car. But he also seems to be questioning his obsession. He fears that taking part in a dangerous race might be immoral since he has a wife and kids now (not to mention they might need him if Ed Norton gets all uppity about playing the Hulk again).

After the wreck he seems lost, and seems to painfully contemplate the tough things people say to him, like Leno’s theory that if he’d done all the work rebuilding the Beast instead of hiring professionals he’d never have crashed it, or some other guy’s claim that muscle cars are crap. He’s at a vulnerable moment where he’s open to all these suggestions and you can see the hurt on his face as he considers them.

I was surprised how genuinely moving this is. There’s a great scene where Bana’s friend tries to buy a guy’s Ford Falcoln to replace the late The Beast. But it means too much to this guy to sell it at any price. He gets tears in his eyes talking about it. His refusal seems to earn the respect of Bana’s friend. There’s also a thread about Bana’s relationship with his dad, and it’s clear that part of Bana’s love of working on cars comes from his dad, and a nostalgia for the bonding they did looking under hoods together. And he can’t understand why his dad still has his beautiful red T-Bird but doesn’t bother to get it running again. If it was Leno he’d probly just buy his dad a new one, but Bana is more sentimental, it has to be the original.

(To be fair to Leno he does say he still has the car he lived in when he moved to L.A. to pursue his dream, and he seems more sincere in this movie than he does on TV. I like Bana better though.)

The movie mostly portrays Bana as a normal guy and doesn’t address his fame much. At one point though he flies back to the U.S. for the premiere of LUCKY YOU, and he seems very uncomfortable and cynical about the whole celebrity thing. He’s walking down the red carpet and you just know he’s not thinking about the movie, he’s thinking about getting back home to be with the remains of his car. I mean how can you really think about this Hollywood shit when a loved one has been hurt?

One note of interest: when word got out that somebody besides Mel Gibson might play Mad Max, many of us immediately thought Bana could do it. Maybe that shows our limited knowledge of Australian actors, but we like the guy so our minds jumped to him. Little did we know that he actually is a skilled high speed driver and even favors the same model Max drove. He explains how he was already obsessed with Ford Falcolns and then the movie came out and blew his mind. Man, they could’ve had him do some of the driving scenes for real! That would’ve been cool. But for some reason they got Bronson instead of Chopper. Must’ve been a clerical error. Oh well.

(note: I reviewed this from an imported Australian DVD. It’s not out in the U.S. yet, but has played some film festivals I believe.)

cars Eric Bana
This entry was posted on Wednesday, December 2nd, 2009 at 2:42 am and is filed under Documentary, Reviews, Sport. You can follow any responses to this entry through the RSS 2.0 feed. You can leave a response, or trackback from your own site.

19 Responses to “Love the Beast”