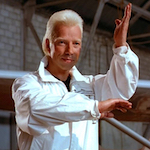 This is the only one not directed by Corey Yuen. His replacement, first timer Lucas Lowe (who followed this with THE KING OF THE KICKBOXERS and AMERICAN SHAOLIN, also written by Strandberg) was a non-martial arts guy chosen by executive producer Ng See-Yuen (a Shaw Brothers executive who’s in the Criterion Collection because he directed GAME OF DEATH II) on the theory that he would focus more on the story. But in interviews Strandberg laments that Lowe would spend too long setting up and shooting extras, run out of time and then cut a bunch of his dialogue. That may or may not explain why I didn’t understand this joke where the main characters’ dad leaves has a guy gagged and tied to a tree outside of his house.

Replacing Yuen on choreography was Antony Leung, a.k.a. Leung Siu-Hung (TWIN DRAGONS, SATIN STEEL, IP MAN), who still gives it a raw Hong Kong feel despite it being filmed mostly in Tampa, Florida and opening with a shot of an American flag in Washington DC. That’s where terrorists take hostages at a bank (you kind of assume they’re just bank robbers, but they keep yelling about Americans) until a whiny hostage starts beating them up and fires weapons out of his crutches and stuff. Oh shit, he’s not just some random cowardly bank customer, he’s undercover CIA agent Casey Alexander (Keith Vitali, REVENGE OF THE NINJA, WHEELS ON MEALS, AMERICAN KICKBOXER 1)! 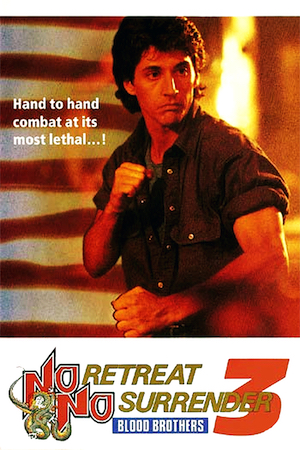 Casey has an estranged brother named Will (Loren Avedon, not the same character he played in part 2) who has his own dojo where he teaches contact karate for “surviving on the street.” Both brothers have been invited by their retired CIA agent father John (Joseph Campanella, STEELE JUSTICE) to his birthday party. He wants to bring them together to mend their relationship, despite a disastrous hunting trip they took together two years ago.

The political tensions between the brothers are unexplained, but intriguing. Dad tells a colleague that Will “doesn’t really agree with the stated goals of the Company,” which manifests in Will

1) calling the CIA “baby killers” and

2) wearing a garish hammer and sickle CCCP jacket to the party. He also recoils at hugs, has resentment about money, and thinks his brother considers him a failure.

“Come on Will, I don’t think you’re a failure,” Casey says. “Just a little weird.”

So of course as these relationships are being established you, the viewer, will realize “Oh shit, their dad gets murdered and they have to work together to avenge his death.” For his part, John puts up a fight against the intruders in his home, killing his first attacker by knocking him over a railing, and managing to get to a couple different weapons hidden in his home. But creepy white-haired Colombian terrorist Franco (Rion Hunter, CAGE, “Indian in Desert” in THE DOORS) kills him with a weird metal dart in retaliation for the death of his son.

The brothers both come in time to find their dad dead, and I hope it’s not too mean to admit that Avedon and Vitali’s attempts to convey deep emotions are not as good as their martial arts. Casey yells, “In this work this kind of thing happens. It happens!” and Will yells, “Why God? We were supposed to go hunting this weekend!” and Casey tells him “Dad wouldn’t want you to take it like this” (crying?).

At the funeral, one of their dad’s colleagues says, “You know how I felt about your dad, Case,” so you may or may not know right at that point who the secret bad guy is. I’ll never tell.

Casey is forbidden from taking the case, but of course goes out on his own to investigate, and so does Will. Somehow they encounter each other while fighting some guys in the parking garage of Casey’s apartment building. There’s a goofy thing where Will sees a lady on the ground in a pool of blood, goes to check on her and two guys drop down from above, then the lady jumps up and it was a guy wearing a wig to lure him in. So they assumed he wouldn’t check on a body unless he thought it was a lady? In my opinion they were overthinking it.

There’s a pretty cool fight there, but Casey tells Will that it only proves he needs to stay out of it and why don’t you take these papers and go wait in my apartment for me. He hands him a manila folder that says TOP SECRET in big letters on the front and he actually didn’t mean it as a “take these papers, and whatever you do DON’T read them, wink wink” type of way. It seems to really not occur to him that Will will open the folder, see that it’s this Franco guy in Florida and go try to find him. 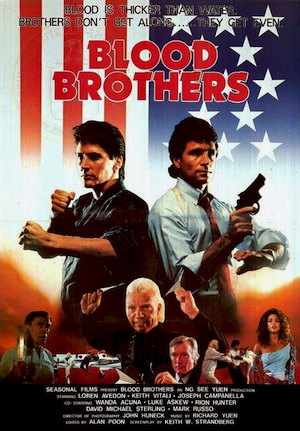 Honestly the amateur seems to do more than the pro on this case. Casey drives by the beach in a convertible, women in swimsuits smile and raise their sunglasses at him, he meets with a friend and drinks fruity cocktails wearing a white suit. Also he goes to a pool, still wearing a suit, and makes hubba-hubba eyes at a babe who walks by in slow motion. He walks up to her like he’s gonna hit on her her but it turns out he knows her but also it turns out she’s mad at him for abandoning her so she kicks him into the pool. Her name is Maria (Wanda Acuna, who also plays Maria in ENCINO MAN, in my opinion part of the NoRetreativerse) and he has sex with her and then manipulates her into being tortured and almost murdered going back undercover in a gang he previously saved her from. Great guy!

Meanwhile, Will swings by Ric Martin’s Okinawan Karate, where a bunch of dudes jump him, but ha ha it’s just for fun they’re all friends. Together they go to some rough arm wrestling bar to track down a guy called Angel (David Michael Sterling, BACK TO BACK, MURDER IN THE FIRST) who gets him in with Franco and he passes a test and almost has to take “a blood trial” (?) but finally he earns Franco’s trust but psyche, actually Franco knew who he was the whole time.

The best fight is the last one, after Will says, “Looks like we’re goin’ on a different sorta hunting trip now, huh?” and they give each other a pound. It’s nice that FINAL MOVE SPOILER they do some team work – Casey blocks Franco’s trademark dart with the cast from the arm injury he got in the opening scene and then Will kicks it back at him like a hacky sack.

However, this one doesn’t have the same innocent and well-meaning vibes I get from the first one. Some weirdly over-the-line misogyny will pop up out of the blue. Maybe we can forgive the agency friend who calls his computer a bitch and a whore and says “She loves it when I talk rough to her,” since it’s not a human he’s being creepy about. It’s harder to swallow when Casey’s plan to escape captivity involves telling a bunch of terrorists to “Have a go at the whore there,” referring to Maria – especially since this takes place in a world where they will immediately attempt to follow his suggestion. Also, I know it was a different time, but it’s a bummer that Will’s karate friends manage to use two different homophobic slurs in their handful of lines.

It should go without saying that I miss the training montages and inspirational rock anthems, but that’s what happens when you leave the world of athletics and enter the world of international terrorism.

I didn’t notice him in the movie, but I did notice an Aasif Mandviwala credited as one of the terrorists, and yes, it turns out it is Daily Show correspondent Aasif Mandvi in his movie debut. I guess that’s not that weird since he played a cabbie in DIE HARD WITH A VENGEANCE and the lead villain in THE LAST AIRBENDER. I don’t know if you guys know that last one, but I have no reason to believe you won’t absolutely love everything about it, I don’t foresee any problems arising from recommending it.

Aasif Mandvi David Michael Sterling Joseph Campanella Keith Vitali Keith W. Strandberg Leung Siu-Hung Loren Avedon Ng See-Yuen Rion Hunter Tampa Wanda Acuna
This entry was posted on Wednesday, February 24th, 2021 at 1:25 pm and is filed under Action, Martial Arts, Reviews. You can follow any responses to this entry through the RSS 2.0 feed. You can skip to the end and leave a response. Pinging is currently not allowed.

3 Responses to “No Retreat, No Surrender 3: Blood Brothers”