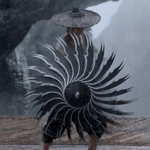 This is a movie that’s a little under two hours and builds to a large battle with some really cool weaponry gimmicks and that thing I love where they come up with a philosophy-based martial art to defeat the enemy. But that’s really the cherry on top – it’s mostly about palace shenanigans. It’s about the kingdom of Pei, who lost the city of Jingzhou to rival kingdom Yang when Commander Ziyu (Deng Chao, DETECTIVE DEE AND THE MYSTERY OF THE PHANTOM FLAME, MERMAID) lost a duel to Yang Cang (Hu Jun, RED CLIFF, BODYGUARDS AND ASSASSINS, FIRESTORM). Most of the people of Pei are still sore about it, but King Peiliang (Zheng Kai, THE GREAT WALL) is a coward and just wants to forget about Jingzhou. So he gets pissed and, to the outrage of the military, strips Ziyu of his title when he finds out he challenged Yang Cang to a rematch.

This probly sounds complicated, but bear with me, because there’s more, and this is where it gets good. Ziyu goes from the palace into a secret cave where he meets with… wait a minute, what the– … Ziyu? It turns out that the real Ziyu who lost the duel was gravely wounded in the process, so he switched places with his “shadow,” a similar looking dude who had been raised from childhood to be his decoy when in danger. Like Saddam Hussein’s family had. Or Queen Amidala. So this is really the story of Jingzhou in sort of an undercover mission trying to pass as the Commander.

There are many complications. He needs to train to be even better than the real guy if he’s gonna win the rematch. And like Darkman in DARKMAN III: DIE DARKMAN DIE, he gets in an awkward spot where he’s pressured to play a musical instrument he doesn’t actually know how to play. The king is weird and cruel and, possibly suspecting he’s an impostor, enjoys putting him in torturous situations.

The only other person who knows his secret is Ziyu’s wife Madam Xiao Ai (Sun Li, FEARLESS, THE LOST BLADESMAN), who keeps having to come up with explanations for things on the fly. There’s obvious real attraction between the fake couple, which puts them in further danger. And both of them seem forced into Ziyu’s master plan of capturing both the city of Jingzhou and the crown. But if Jingzhou succeeds then Ziyu promises to finally release him to the mother he was stolen from as a child. 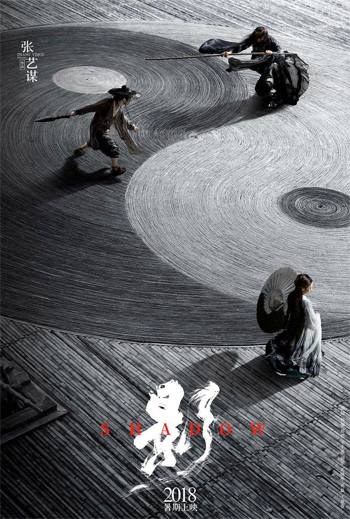 The story takes place during a seven day rain storm, so there’s little sunlight. We get the impressively detailed costuming, massive scenery and yes, some of the epic battle sequences that Zhang has become known for, but none of the bright colors. Through design (as opposed to SIN CITY style trickery) everything on screen is grey, white or black, except for flesh, blood or flames. During the battle there’s some brown bamboo. That’s about it. It’s a stunning look that fits the mythical nature of the story, because it resembles an ink wash highlighted with small blots of pigment.

I never felt impatient for it to get to the combat, but if I had, it would still be worth the wait. The most distinct action gimmick involves metal, bladed umbrellas that not only spin beautifully but are used to sled down a hill. And Jingzhou arrives for the duel on a giant floating bamboo platform on stilts. Both vehicle and arena. There’s also an army of convicts trained in umbrella techniques. And a really cool Trojan Horse type trick. A nice injection of THE GREAT WALL type pulp into something that’s less of a spectacle.

I sometimes hear that Chinese historical movies I like (including HERO) are government propaganda, and I feel like I don’t have a sophisticated enough understanding of them to get why. And they feel removed enough from reality that I don’t worry too much about it. But this one raised my eyebrows a little at the beginning because we have this jerky idiot king who’s trying to stick to a truce, and the noble commander and all the badass warriors who are so disgusted with him and are, through their seemingly upright and noble actions, trying to restart the war. I was prepared to enjoy the story anyway, but as soon as the real Ziyu is revealed, and his acting style as he explains his master plan is crazy-villain, it’s clear that there’s something more to it. By the end I felt like SHADOW was an indictment of this whole world of war and power, the world of men.

The poster above sums it up visually. Two men fighting, taking up the entirety of the yin and yang, while the woman has to stand off on the side looking pretty. The opening text frames this as the story of Madam, a character who is mostly passive and on the sidelines, yet manages to invent the entire fighting style and military strategy to defeat Yang and recapture Jing. She suggests and demonstrates the use of the umbrella as a feminine weapon vs. Yang’s masculine metal staff. And she does it standing on a giant yin yang symbol that causes the Commander to say Of course! I designed this tai chi diagram, why didn’t I think of it?

Yeah, sure buddy, you were right on the verge of coming up with that idea yourself, it pretty much counts as your idea. What a fluke that this lady happened to stumble upon it moments before you were gonna think of it.

The king’s sister, Princess Qingping (Guan Xiaotong, PAINTED SKIN: THE RESURRECTION) is another favorite character, the more reasonable presence in the court, always trying to talk the asshole king out of his stupid and crazy ideas, sometimes from behind a screen while he sits on the throne. When Ping tries to make peace by offering his sister as wife to Yang’s dipshit son Ping (Leo Wu, ASURA), and then when he accepts Ping’s counter-offer to make her a concubine, that’s the betrayal that pushes the princess over the edge, as well as one of the generals (Wang Qianyuan, THE EMPEROR AND THE ASSASSIN), who strips off his own armor in defiance. (This general’s reaction when the king attempts to kill him for it is a great moment in cinematic badassery.)

So one of the great thrills of the movie is when the princess slips in with the commander’s army so she can go find and kill Ping for the insult of asking for her as a concubine – an offer we find out he was not even serious about. I couldn’t help but think this was like a woman going to confront the online troll who sent her rape threats.

The shadow is the one who has to win this duel and execute this cool plan, he gets to be the glorious warrior hero. But it’s not his war. He’s an indentured servant, a victim, kidnapped as a child, subjected to what is described as brutal training, having to cut himself and infect the wound to imitate the near-fatal injury of his master. He’s just trying to do what he has to do for the small promise of being able to go back home and find out if his mom is still alive. So he’s the protagonist, the one we’re hoping will come out on top.

(ENDING SPOILER) And even this fuckin guy… he has a chance to walk out of there a hero, but he succumbs to the temptation of shenanigans and throne games and all that. The chance to really take the place of his power hungry slavemaster. And we’re left with Madam, standing at the door, having to decide whether to play along, or what the hell to do. Fuck.

Deng Chao Guan Xiaotong Hu Jun Leo Wu Sun Li Wang Qianyuan Zhang Yimou Zheng Kai
This entry was posted on Tuesday, August 13th, 2019 at 11:31 am and is filed under Action, Drama, Martial Arts, Reviews. You can follow any responses to this entry through the RSS 2.0 feed. You can skip to the end and leave a response. Pinging is currently not allowed.