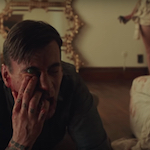 That’s where he’s just starting renovating a rundown house, his pregnant wife Liz (Trieste Kelly Dunn, LITTLE CHICAGO, Banshee) periodically checking in on Facetime. He’s alone with his dog, some power tools, some personal demons, and maybe some supernatural entities. At least that’s my interpretation of the various goos dripping from outlets, lightbulbs and holes in the walls.

There’s more than a little mother! in this surreal living-house stuff, but it feels less like a fever dream and more like a ghost story. And Aranofsky probly wouldn’t go for the grossout of Don’s dog immediately running upstairs and licking at a puddle seemingly too large to possibly be associated with the used condom in the middle of it. This house has been left in poor condition, is my point. And for some reason Don doesn’t ever seem to put on gloves when he cleans it up.

A neighbor comes by to say hello: spunky pastor Ellie (Karen Woditsch, 1 episode Chicago P.D.) from the Presbyterian church across the street. She’s a cool, open-minded pastor who brings a bottle of bourbon to share. 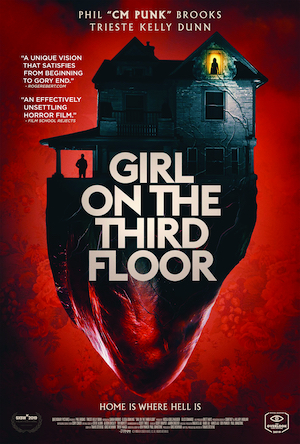 The troubled histories of the house and his life are revealed to us a little bit at a time. The place used to be a brothel. In a weird encounter at an empty diner/bowling alley, an old bartender (Marshall Bean) warns him that the house is bad news for straight men. H doesn’t give any indication what that means.

I like when Liz notices a beer bottle behind him on a call and he tells her there’s junk all over the house and she has to trust him. That’s when we put it together that he’s supposed to be abstaining. He doesn’t seem out of control, but we’ve seen him have a few drinks and now he’s lying about it.

It gets more troubling when he has a one-night stand with young neighbor Sarah (Sarah Brooks, Chicago Med). She’s very clearly trying to get with him and he doesn’t know he’s in a horror movie so he’s just trying to balance how hot she is versus his commitment to his wife. He’s not considering that anybody acting like that is definitely one of those sexy ghosts you gotta look out for.

Don’s upstanding buddy Milo (Travis Delgado, 1 episode Chicago Fire, 3 episodes Chicago P.D.) comes to help with the renovation and check up on him. Don takes him to the bar and he promises not to snitch, citing Bro Code. But I was impressed by what he does after seeing Don threaten Sarah and finding out about the affair. Don is all it was just one time, it’s over, it’s fine, don’t worry about it but Milo says that Liz is his friend, how can he look her in the eye while keeping this a secret?

I really like that because that’s the proper reaction, and I can’t off the top of my head think of another genre movie that acknowledges you can be friends with both sides of a couple equally and not exclusively the one of your gender.

This is a spoiler, but I like that he starts out seeming like a pretty cool guy, then a flawed guy, then a friend you’re disappointed in, then a complete fuckin psycho you want nothing to do with. And there’s a good chance that means the evil of the place is heightening all his worst qualities to push him over the edge, but maybe he just can’t take it. He was on the edge and well, shit, sexy ghosts? Bleeding walls? Time to snap.

It does get nasty. Some gooey effects of the practical variety people enjoy. Some hammers to heads, some cutting himself open with a box knife because marbles are rolling under his skin. There’s an apparition (Tonya Kay, RAZE) with her face busted open and tied together with rope, kind of a SILENT HILL vibe there. I like when he’s busting open a wall and there’s some kind of pulsating organs growing inside! I would be so bad at that home improvement stuff.

I tend to like movies starring wrestlers because they have a different presence than normal actors, and they’re giant cartoon lookin dudes so it’s fun to see characters in movies who are larger-than-life like that, or to see someone like that just playing regular. The Arnold-playing-a-small-town-sheriff factor. But this is more like watching a Henry Rollins movie than a Steve Austin. It’s a good performance and he has a strong husband-wife chemistry with Trieste Kelly Dunn as Liz, no matter what I think of couples that call each other “babe” all the time. She’s so natural as his wife I suspected the “introducing Sarah Brooks” on the opening credits meant this was his real wife (not knowing Sarah Brooks is not the one playing his wife and is not related to him).

Here’s a BIG ASS END SPOILER. There’s a really neat trick that the spirits of the house get to him and make him kill himself… and then Liz gets there, wondering where he is. So it’s along the lines of the PSYCHO Janet Leigh trick except it’s one protagonist for most of the movie and only in the last act is he replaced by a character we’ve only seen on the screen of his phone. But it really works because we already felt bad for her for the way her husband was lying to her, and by then he’s become completely irredeemable, so it’s a cool surprise to suddenly switch to someone we’re rooting for. And she’s really good. I love how believably she reacts as she looks around the house, finding weird shit but just assuming her husband is a fuckup and not that it’s a haunted whorehouse.

MORE BIG ASS END SPOILERS. There is, of course, the traditional “you thought everything was back to normal but oh no, the horror continues” epilogue, which is fine but it sort of fucks up something I really liked: after generations of men giving in to the temptation of the ghosts angry about being wronged by men long ago, a woman finally comes along. So she immediately finds the remains of the murdered girl and gives her a proper burial, ending the curse. The quickness of the montage that gets this across kind of implies, “Jesus, was that so hard, fellas?”

This is the feature directing debut for Travis Stevens, but he’s already well established in the horror and indie worlds as producer of CHEAP THRILLS, JODOROWSKY’S DUNE, STARRY EYES, MOHAWK and many other things. I’ll be sure to check out his next one, JAKOB’S WIFE, which will star Barbara Crampton and Larry Fessenden (with Brooks playing a deputy).

C.M. Punk ghosts Karen Woditsch Sarah Brooks Steve Albini Travis Stevens Trieste Kelly Dunn
This entry was posted on Tuesday, April 28th, 2020 at 1:11 pm and is filed under Horror, Reviews. You can follow any responses to this entry through the RSS 2.0 feed. You can skip to the end and leave a response. Pinging is currently not allowed.

4 Responses to “Girl on the Third Floor”