Killer Instinct: How Two Young Producers Took on Hollywood and Made the Most Controversial Film of the Decade by Jane Hamsher

I got alot of problems with this book, but I kinda recommend reading it if it’s a subject you’re interested in. It’s got some funny stories about Oliver Stone and the crazy antics of Hamsher’s partner Don Murphy, probly best known now as a producer on the TRANSFORMERSes, but I remember his name because of many belligerent message board posts and open letters he’s written over the years. Because I’ve read so many of those it’s hard for me to buy Hamsher’s portrayal of him as a lovable madman, but there are good stories about him that aren’t about him yelling at anybody. I dug the one where it’s the middle of the night after a long hard shoot and he manages to get Oliver Stone and the whole crew excited about staying later for a product placement shot of a truck so they can all get free cowboy boots.

The book tells an interesting story, depicting Hamsher and Murphy as these young fresh-out-of-film-school amateurs lucking upon this script by their unknown friend Quentin Tarantino and then riding it through Hell and back. She portrays herself as an underdog, a young person entering a grown up world, and sort of a voice of reason among lots of crazy people, so there’s a certain relatability to it.

But I think she has sort of an unintentional unreliable narrator thing going too. The way she tells it she has constant run-ins with all these idiots who work with Oliver Stone who have no idea what they’re doing and are jealous of her for no reason. But by the end of the book I started to wonder if maybe they just didn’t like her because they’ve been doing this for years and this film student keeps yelling at them that they’re idiots and they’re doing everything wrong. That could be part of why they don’t seem to adore her, maybe.

Stone says that Marshall and his agents advised him to pay out Hamsher and Murphy’s contract and not involve them in the film. “Instead, I made you as much a part of the process as I could. I cannot tell you the time and energy I spent dealing with the complaints of the department heads about your meddling in their affairs. . . . Any established director would long before have asked you to leave the set. I resisted that.”

Stone seems most upset by Hamsher’s dismissive account of his production team, saying, “When you’ve produced {as many} complex pictures as we have . . . then you might be able to pass judgment on others’ methods. Till then I would have the modesty to keep my mouth shut and my eyes open.” 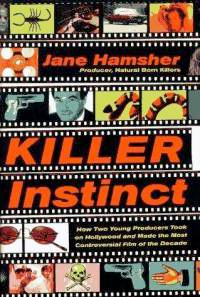 I wonder if some of the facts might be off, too. There’s this story about the deleted “Hun brothers” scene that says that Tarantino wrote it for a pair of twin bodybuilders who were going to fund the movie so they could get their SAG cards. But of course the characters are obviously based on the Barbarian Brothers, who played them in the unused scene, and had been making movies since 1983. In fact, NBK was their last movie, not the one that got their foot in the door. Later in the book the scene is mentioned again in a letter from Murphy to Premiere. There he claims that Roger Avary “wrote the [unfilmed] bodybuilder scene in NBK,” which contradicts the reality that the scene exists as an extra on the DVDs and blu-rays of the movie. In my opinion it was filmed.

But overall it’s some funny anecdotes about what it’s like to work with Oliver Stone and to be a beginner movie producer and to hang out with Don Murphy. And it’s an interesting and not flattering perspective on young Tarantino. In Hamsher’s view, Tarantino is a backstabber who was very supportive of the project to her face but betrayed them when he had success with RESERVOIR DOGS and decided he didn’t want his other not as good script to get made. (Also she reprints a moronic “your leggs looked so sexy” note she says he handed her at a film festival. I believe it because it looks like his handwriting as seen on the Bride’s hit list in KILL BILL.)

I’m sure the portrayal is at least partly accurate, but you gotta take it with a grain of salt for about a hundred reasons, one being Hamsher’s obviously completely wrong assessments of Tarantino’s work. Even within this memoir she can’t keep it straight about his NBK script, at first writing about how much she believes in its brilliance and later seeming to think it was nothing until they totally rewrote it and abandoned its structure and many of its scenes in editing.

I got a kick out of her description of seeing RESERVOIR DOGS for the first time. She has to admit it’s good, but gives it the most underplayed review I’ve heard of this particular movie:

“The lights went down. The film went up on the screen and, to my mind, it was a pretty good little film. Having read the script, I don’t know what I was expecting; the performances were good, save Quentin’s… and although I thought the directing was working a bit hard to call attention to itself and was sometimes at odds with the performances, over all I thought it was a remarkably self-assured first directing effort.”

(“the directing was working a bit hard to call attention to itself”… does she know she’s writing a book about NATURAL BORN KILLERS? And she’s saying this about RESERVOIR DOGS?)

Later she tries to explain that his entire writing output at that point was flukes and rip-offs:

“So you’re Quentin Tarantino. You’ve been a big goof sitting on a sofa watching videos for most of your life. You don’t even have a car, but you get yourself a job in a video store with a bunch of other geeks like yourself, and you all sit around musing about the movies you’d make if you had the money. With your pal Roger Avary, you jerk off this 400-page mess called Open Road, and out of that you carve NBK, True Romance, and parts of Reservoir Dogs – the rest you rip off from Chinese action films.”

“And the only thing you’ve ever written by yourself is this lame vampire movie called From Dusk Till Dawn for some special-effects guy who pays you $1,500,” says Don.

“Right. So boom, Res Dogs comes out, and it’s a phenomenon. Boom, True Romance comes out; it could be better, but everyone’s calling you a genius. Suddenly the onus is on you to follow it up. And in your heart of hearts, you know that you’re a one-trick pony–you’ve got the same characters, the same scenes appearing over and over again in Res Dogs, NBK, and True Romance. You’ve never really written anything on your own, except for one weak script. What are you gonna do for a follow up? The last thing you want is for someone else to be doing your hyperviolent, digressive dialogue stuff and playing it out before you can do that yourself. How do you keep that from happening?… you buy a little time before anyone realizes you haven’t got an encore,” I said.

Well, setting aside the questionable (to put it charitably) description of those early scripts (I mean, who doesn’t at least kinda like FROM DUSK TILL DAWN?), I feel like PULP FICTION, JACKIE BROWN, KILL BILL volumes 1 and 2, DEATH PROOF and INGLOURIOUS BASTARDS made a pretty good encore. Hamsher produced DOUBLE DRAGON, APT PUPIL, PERMANENT MIDNIGHT and FROM HELL before retiring to become a well-known Huffington Post political blogger. I’ll give Murphy credit for having his name on BULLY and for apparently not being creatively responsible for the TRANSFORMERSes. (Michael Bay once wrote on his blog: “I never spoke creatively with Don. I read his notes kind of trashing the script and making me and the writers feel like a big shit pile. But during production Don was nice to me, he knew I was not going to talk creative with him.)

And I guess SHOOT ‘EM UP, SPLICE and REAL STEEL are all semi-respectable. But I’m not giving him a pass on THE LEAGUE OF EXTRAORDINARY GENTLEMEN. A movie so terrible that its director left the business, even though he’s the director of motherfuckin BLADE! And for good measure Murphy publicly trashes both the writer and artist of the comic book it was based on.

Honestly, I feel like Hamsher and Murphy kinda have good taste. They go after projects that are potentially interesting, even if some of them turn out to be horrible garbage in the end. But the number of movies Hamsher produced total is lower than the number of certified classics Tarantino has written and directed so far. So the grapes look even more sour in retrospect than they did at the time of publication.

One thing Tarantino definitely does better than Hamsher you might’ve noticed in that excerpt there. She’s terrible at writing dialogue. I know this is just a storytelling device, and that nobody can remember conversations from their life verbatim, so she probly doesn’t want us to believe they are the actual words that were spoken. But her idea of witty repartee is fuckin painful to read:

“What, are you suprised?” I said. “The people who pump millions out of a few cents of carbonated sugar water every year, who essentially have nothing but a trademark and an image of being all-American and wholesome, are concerned about our insinuation that their advertising dollars are financing the production of violent, exploitive, socially debilitating TV shows that care only about ratings at all costs? Gee, who would have thought.”

“Well, that’s not the only place in the movie where we used their stuff,” he said defensively. “Juliette’s also holding a can of diet Coke in her hand when she visits Woody in prison.”

“Yeah, and she’s giving him a hand job with the other one,” I said. “I don’t think that’s what they have in mind when they say, ‘Things go better with Coke.'”

To my mind, it’s not that good of a little book. But I enjoyed it as a gossipy memoir and as a coming-down-on-the-wrong-side-of-cinematic-history curiosity.

Barbarian Brothers books Don Murphy Jane Hamsher Quentin Tarantino
This entry was posted on Tuesday, August 7th, 2012 at 2:52 am and is filed under Crime, Reviews. You can follow any responses to this entry through the RSS 2.0 feed. You can skip to the end and leave a response. Pinging is currently not allowed.