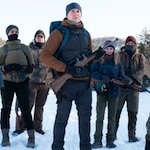 It’s about this guy named Antoine (Guillaume Laurin, MOMMY), middle class husband and father, slightly on the dorky side, and really into survivalist shit. He watches his hero Alain (Réal Bossé, NITRO)’s well-produced, reasonable-seeming instructional videos online, follows along with his daughter, sealing a giant pack of rice for storage and getting her to repeat her lessons about why it’s important. Alain mentions how fast Montreal grocery stores will run out of staple foods during an emergency, which hits a little close to home in this time of pandemic. (Later someone will mention the threat of an H1N1 outbreak.) And Antoine doesn’t fit the stereotypes of survivalists so it comes across as a weird but harmless hobby more than a paranoid obsession.

Then a spot opens up for Antoine to attend a training session on Alain’s property. A dream come true! Like attending a very exclusive seminar. They meet out in the middle of snowy nowhere, hide Antoine’s car under a camouflage net, he hands over his phone and dons duct-taped-over goggles for the snowmobile ride to the property. Hmm. But Alain’s manner is so friendly and matter-of-fact that it comes across like “Oh yeah, it’s fine, that’s just the policy.”

Most of the other people have already arrived. One more coming in. They shake hands, say things like “This is gonna be fun, man!” He sees where they’ll sleep – beds in a big tent, rules posted on the wall, 10:30 curfew. 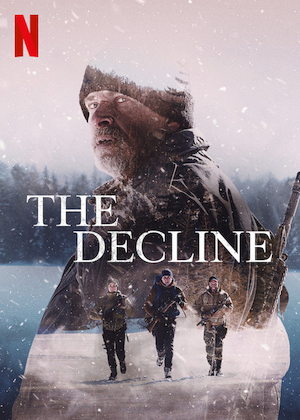 “This here is my project, my baby,” Alain says. He’s very proud of his “survivalist temporary autonomous zone,” about a decade in the making. “You’ll see other bases. But none like this one.” He has solar panels, propane, his preferred type of fire wood (“green wood won’t give you any heat”), chickens, a greenhouse (geodesic dome, in fact!), apple trees, hunting grounds, animal traps, maple taps. “For now, I make it by hand, but I plan on having a real installation. Because when everything collapses, maple syrup will be perfect for trading. Because everybody likes a little sweetness.” He thinks about this kind of stuff.

Of course he also shows off his escape route, in case he gets attacked. Even more thought out. He leaves some of it vague. Mentions booby traps (“nice little surprises”). We know this will come up again.

But you can see the appeal of this. They don’t seem like zealots, the women especially. It’s a little bit like a commune, or summer camp. And everybody’s nice to each other. Well, I guess there’s a little bit of teasing when a guy almost throws up from the smell of cutting open a rabbit. But you get teasing at summer camp too. This is friendly. Very mild compared to what goes on in SLEEPAWAY CAMP or RETURN TO SLEEPAWAY CAMP.

We know we’re watching a thriller though. There are two people I assumed would turn into bad guys. Sebastien (Guillaume Cyr, WETLANDS, but not the same one I’ve heard of) is a huge hunter dude in camo who shows up last, brings a ton of stuff, annoys Alain by being a knowitall and telling him his “bug out” should be mobile. But he actually turns out to be a lovable lug with a Chris Pratt meets Nick Forst kind of vibe. Really, David (Marc Beaupré, BON COP BAD COP 2) is the only one who seems like a character you’d expect in a movie about survivalists. He’s the one who rants about gun control and looks like he could be a skinhead. Everybody else just dresses to stay warm.

I like the irony of David worrying about the government controlling him after willingly giving his phone to a guy and being blindfolded and taken to a secret camp where he has to go to sleep and get up when he’s told. For freedom. It’s not surprising when he’s the first one to fantasize about what he’d do if somebody got caught in one of the traps. “I would treat myself,” he calls it, but claims he doesn’t know if he’d kill them.

But Alain doesn’t seem like a tyrant, he seems like a beloved teacher, maybe a wise guru. He always tells people they’re doing a good job, he likes to play his piano, he wears reading glasses around his neck, he has everyone at his table for a nice dinner and humbly turns Sebastien’s toast to him into a thank you for them. Says he’s just happy to be able to pass on his knowledge and see them use it. It all seems very nice until he warns about the other people out there who don’t have “good sense” who “will try to steal everything you have.” And Antoine says, “The Golden Horde,” knowingly.

It’s never explained. Must be a concept Alain talks about in his videos, that Antoine is okay with. I was nervous to type it into Google, sounds like some white supremacist shit. According to Wikipedia the name, which originally described a part of the Mongol kingdom led by Genghis Khan’s granson, refers in this context to “the anticipated large mixed horde of refugees and looters that will pour out of the metropolitan regions.” The author who coined the term wrote that “if the entire eastern or western power grid goes down for more than a week, the cities will rapidly become unlivable… there will be a massive outpouring from the big cities and suburbs into the hinterboonies.” So, yes, definitely seems like code or subconscious telling-on-oneself about the fear of “urban” individuals for some fucking reason wanting to come live on your farm. Don’t flatter yourself. Have you seen I AM LEGEND? The city is where it’s at. Especially for looting!

In fairness, I also read that the aforementioned word-coiner is controversial among survivalists for preaching against racism and in favor of Christian charity, which he sees as “not optional” but “Biblically mandated,” even after societal collapse. Still, the subtext is there. He called them a horde, after all.

Which brings up a question: does Rachel (Marie-Evelyne Lessard, VILLE-MARIE) feel uncomfortable when they talk about this? She’s black. She’s also the coolest one. She was in the Army, and at the campfire she proves she can subdue the men with her Krav Maga moves. She and Antoine also make a kickass team on the running target-shooting course. Again, we know this will come up again. I like when we know stuff like this will come up again.

I won’t say how things go bad. It’s abrupt and upsettingly simple. Alain never proves to have some sinister secret motives or anything, he’s pretty much who he seems like from the beginning: a guy who’s usually nice but flips out if he thinks you’re wasting water and also is gonna be a whole lot of trouble if you want to report an accidental death on his property. Even then he seems very reluctant to go to war with these people who he genuinely likes. Until they break into his bug-out and steal some guns. The suspense is very effective, a good mix of delivering on those things it set up and swerving in directions I didn’t expect.

This is the feature debut of director Patrice Laliberté, who did some shorts and a TV series called GAME(R), which shared some of this cast and one of the co-writers, Charles Dionne. It’s all elegantly directed, natural and not showy, serious but not too dour, since the characters are allowed to laugh with each either before everything goes to hell. And the whole cast is good, particularly Bossé as Alain, who is so convincing as a bad guy who doesn’t know he’s the bad guy, especially in the scene where he finally loses his cool and yells at them that they’re losing their cool.

It turns out even if you plan for everything and have all the resources, there’s still a chance the shit will hit you long before it hits the fan. So be nice.

I like that he loves playing piano and then there’s that scene where a fight is going on inside the room and you hear someone banging against the piano keys. It doesn’t seem like it could be his head, but it’s something. Good touch.

Also I like that she pours his fuel on his plants and burns them. Needless waste of resources. Revenge for yelling at her about the water.

Guillaume Cyr Guillaume Laurin Krav Maga Marc Beaupre Marie-Evelyne Lessard Patrice Laliberte Quebec Real Bosse survivalists
This entry was posted on Wednesday, April 29th, 2020 at 10:19 am and is filed under Reviews, Thriller. You can follow any responses to this entry through the RSS 2.0 feed. You can skip to the end and leave a response. Pinging is currently not allowed.

2 Responses to “The Decline”