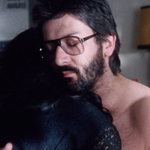 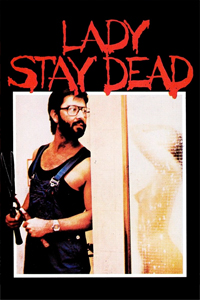 Turns out this is not at all the no budget regional sicko movie I pictured. It’s an Australian film, a pretty slick one with good production value, though with disturbing content. It opens in a beautiful beachfront villa (filmed in Palm Beach, Sydney), where 24 year old singing sensation Marie Colbie (Deborah Coulls, ROBBERY UNDER ARMS) – who just goes by her first name, like Tiffany – starts her morning with a naked dip in her pool that overlooks the actual water.

The bearded, bespectacled, Bob-Zmuda-looking motherfucker on the cover is Marie’s handyman Gordon Mason (Chard Hayward, THE KILLING GAME, Santa Barbara), who she doesn’t know is obsessed with her. There are a couple ways the movie could introduce this information. It could first show him on the job, have him act normal, make us suspicious with some creepy closeups of his eyes, aided by music cues, waiting until maybe a third of the way in before showing him peeping in a window or something to confirm that yes, your suspicions that were given to you through the power of filmatism were correct, this guy is not to be trusted.

Writer/director Terry Bourke (INN OF THE DAMNED) chooses the other way, the better way: before we even know this guy works for Marie, we cut from her skinnydip to him in his apartment, wearing only bikini underwear, holding a rifle, checking himself out in the mirror, walking into his bedroom where two giant blowups of a “TEENAGE STAR WINS AWARD” newspaper clipping hang on the wall, putting Marie’s album Love Songs: 12 exciting new hits on the turntable and laying on the bed listening to it while cuddling a life-sized dummy of her.

So we know who we’re dealing with here.

During the day he’s around her house with lawnmowers, hedge clippers, a chain saw, taking out the garbage, nobody paying him much mind during a commercial shoot. But when Marie does a topless beach workout he hides nearby and watches with binoculars, humping the sand, flashing back to naked women tied to chairs. See, it’s also worth noting that his current career as a celebrity stalker is built on a foundation of serial killing. He carries Polaroids of his victims in his overall bib and on the mirror flap in his pickup.

Marie is a pretty bratty prima donna and she’s rude to him, which he uses as an excuse to come into the house and confront her. That turns into a sexual assault, and afterwards, when she doesn’t play along with him acting like it was okay he kills her in an effectively disturbing-without-being-graphic way. Just like the killer in the lesser Slasher Search entry POSSESSION: UNTIL DEATH DO YOU PART he’s a delusional misogynist who fantasizes about being some romantic hero but just uses women for his violent sexual desires and then sees himself as a victim when they don’t fall in love with him. “You were supposed to be different!” It’s a cliche horror movie profile that obviously comes out of a timeless truth. (If this came out today it would inspire comparisons to “incels”.)

The title had me thinking Marie was gonna be Hard To Kill, but in fact she’s a Marion Crane. She lays there dead and he pathetically tries to wake her up. “Ms. Colbie? It’s all right now!” No dice. And it’s very upsetting to see her like that. I’ve been watching too many movies where you can see the “body” still breathing. Coull has a few scenes worthy of Terry Kiser in WEEKEND AT BERNIE’S. This is also the rare horror movie with what seems to me a realistic touch of the heroine becoming overcome with grief when finding the body of a loved one and staying with it rather than having the sense to keep running. 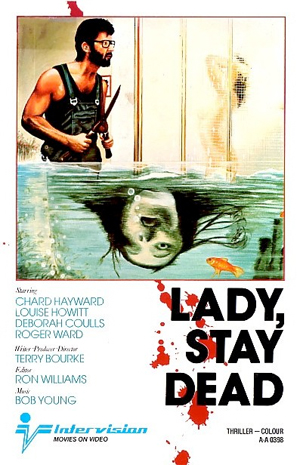 That’s later. Gordon hides the body and tries to act normal. Marie was about to leave for a trip, and her older sister Jenny Nolan (Louise Howitt) arrives to house sit. She’s worried about never seeing her sister, but thinks of many explanations. Meanwhile Gordon is around pretending to be helpful while trying to cover his tracks and making more of a mess. And sometimes he does creepy shit like stand unseen outside the shower while she’s inside. The synths on the score by Bob Young (DOT AND THE KANGAROO) echo Marie’s haunting song as the afternoon goes long and Jenny slowly encounters enough evidence to figure out what’s going on.

After the sun goes down the standoff begins. Gordon has been wearing a tank top for most of the movie, now he shows up in a suit and tie and even brings flowers, which he notes after already having admitted to cutting the phone lines. He taunts Jenny from outside of the house, throwing things through the windows, sawing through the door with the chain saw we’ve already seen him use for legitimate purposes.

It’s such a relief when the cops show up, but it’s quickly evident that they’re not exactly Murtaugh and Riggs. I realized that when Pops (James Elliott, NED KELLY) exited the house ducking back through the chain saw hole instead of unlocking the door. Collings (Roger Ward, MAD MAX, TURKEY SHOOT, LONG WEEKEND remake) does a little better, but his macho talk causes Jenny to call him a “fuckwit” and then he slaps her! No men on either side respect women.

Speaking of men – what’s up with Jenny’s husband Michael, who is supposed to be coming that night, but never shows up? Maybe I missed something. Or maybe that guy is gonna feel like a huge asshole for fucking around and missing his flight.

By the way, despite the questionable looking cover, the quality of the Blu-Ray is pretty good. No extras, and it doesn’t look cleaned up, but it’s a direct transfer of a print I would consider great if it was playing in an all night horror fest. As of this writing you can find it on ebay, but not Amazon – maybe they didn’t get the rights?

This is not a fun horror movie, but it’s a good one – the story of a sick bastard and a couple days stewing in the dread of a regular woman inevitably having to confront him. If icky and scary is what you’re looking for, you got it. If you’re looking for a good handyman, though, definitely go somewhere else.

Australian cinema Chard Hayward Deborah Coulls James Elliott Louise Howitt Roger Ward Slasher Search stalker Terry Bourke
This entry was posted on Thursday, October 24th, 2019 at 10:12 am and is filed under Horror, Reviews. You can follow any responses to this entry through the RSS 2.0 feed. You can skip to the end and leave a response. Pinging is currently not allowed.