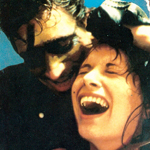 It opens with a dude dragging a dead woman by one arm from the yard of his big house to a spot just inside the surrounding woods, where he digs her a grave. At first they’re not showing his face, but then they do, and he’s babbling animatedly about having thought she was different or some bullshit like that. His name is Frankie (John Robert Johnston, who became an executive producer of reality shows including Rampage, When Vacations Attack, Pranked and Bad Dog!), and he’s got a bunch of other dead women in his closet, plus he kidnaps a live one named Madeline (Sharlene Martin from FRIDAY THE 13TH PART VIII: JASON TAKES MANHATTAN) from a parking garage. He brings her home, says weird things to her, forces her to put on his mom’s dress, yells at her when she pulls down her top for a second because what if Mother saw her do that!?

We’ve seen this sort of thing before, the twist-free PSYCHO riffs about psychotic misogynists with delusional mother fixations caused by childhood trauma. MANIAC and DON’T GO IN THE HOUSE are two really good versions of this sort of thing. Related, there’s ANGST, which doesn’t have as much mother business but does force you to follow the killer the whole time, the movie’s incredibly artistry the only safety rope to help you survive its overwhelming queasiness. POSSESSION definitely doesn’t have that – it’s shoddy and amateurish in the Slasher Search tradition. But I thought it was at least refreshing that his mom (Monica Marko, KNIGHT MOVES) is alive and doesn’t seem obviously crazy. It’s kind of creepy being unsure how much she knows about what’s going on or how much she’s willing to overlook. My only fear was that she would turn out to be imaginary, but what I really needed to fear was that he would blame her for his victim escaping and kill her very early in the movie. (Because that’s what happens. Spoiler.)

Madeline gets away and calls the cops. I need to single out the officer who talks to her. Probly less than an hour after managing to survive an abduction and attempted murder by a prolific serial killer at his own house she asks, “He’s still out there. Isn’t there anything you can do?” and the officer says matter-of-factly, “Afraid not. Not at this point.”

There’s no indication that he’s put any effort into helping her retrace her steps to the house, or that he’s checked the scene of the abduction for witnesses or evidence or surveillance video, or that he’s had her sit with a sketch artist. It seems he just filled out a report. I wrote down your name lady, I don’t know what else you expect. I’m sure it was just a one-off thing, probly.

Madeline doesn’t take it too hard, but then her and some friends drive around looking for the killer, and they quickly find him! He tries to get away in a row boat, which blows up when the cops shoot it.

I have to admit, I assumed we’d be stuck in that house for the whole movie, so it’s a relief and a surprise that it opens up to other locations, forms of transportation, etc. There’s a bunch of blazing guitars and synth jams as police cars zoom around with their lights on. Then there’s a long, uneventful section of the ladies having a night out watching male strippers. I guess that balances out all the underwear, shower and bath scenes. One false scare involves a woman taking a bath and the pizza delivery man inappropriately letting himself into the house and walking right into the bathroom. She angrily tells him to leave but then is weirdly comfortable just assuming he’s gone and going back to enjoying her bath. (While the pizza gets cold.)

There’s a road trip to a cabin, where Frankie hunts them/somebody/whoever. Meanwhile, a lady gets out of the shower, puts on white lingerie, stockings and high heels and lays down on the bed, and Frankie comes in in black clothes and camouflage face paint and stabs her in the back. This is kind of how the movie will continue: there are various women in various places, Frankie is also there sneaking around trying to kill them. I read that they’re sorority sisters, but I couldn’t follow who was who and wasn’t sure if the people knew each other. And it seemed to me to cut freely between day and night.

Frankie has that pro wrestling style of mugging, selling every expression four times too hard, making sure everybody knows he’s crazy at all times whether he has a line or not. But not in a fun SILENT NIGHT DEADLY NIGHT 2 kind of way. At home he seemed like an uptight dork, well dressed, Norman Bates meets Ted Bundy, then for the rest of the movie he’s cosplaying John Matrix, seems like a different guy. His dialogue is mainly themed around his supposed attempts to find the right woman and blaming them for allegedly not living up to his standards. In one part he seems to think his mom is still alive.

I noticed a grip named “Dave Goyer” on the end credits. I was hoping that was BLADE writer David S. Goyer, but he would’ve been studying screenwriting at USC at the time, and this was filmed in Vancouver, so it’s probly the David G. Goyer I found on IMDb.

IMDb lists directors Michael Mazo (EMPIRE OF ASH, TIME RUNNER, CRACKERJACK) and Lloyd A. Simandl (LETHAL TARGET, CHAINED HEAT 2001: SLAVE LOVERS, CALIGULA’S SPAWN) and screenwriters Lyne J. Grantham (production accountant on EMPIRE OF ASH) and Simandl. Although the two directors did work together more than once, I really wonder if this was cut together from two or more unfinished movies. If they did intend for these scenes to be cut together, it’s hard to imagine they had any sort of a script or plan. Another possibility I kept considering was that the reels were put together in the wrong order.

I can’t say I got much out of this one.

Based on the box I thought I might have a real discovery on my hands with this 1987 film from TRICK OR TREATS director Gary Graver. John Phillip Law and William Smith are among a group of Vietnam vets who go on a yacht trip together, and one of them may be the person we saw escape from an insane asylum who is harpooning the people on the boat one-by-one. It has an annoying wraparound/voiceover narration format, Smith plays a belligerent drunk and the production values are shitty. It did at least make me write down the line, “This incident is of such a nature that it could shake the very foundations on which this hospital stands.” But I was struggling to get through it on VHS and then I found out somebody recently put it out on Blu-Ray and I wasn’t about to go fishing for the better version so I decided to throw this one back.

get it, because of fishing

Lloyd A. Simandl Michael Mazo Monica Marko Sharlene Martin Slasher Search slashers
This entry was posted on Thursday, October 17th, 2019 at 12:39 pm and is filed under Horror, Reviews. You can follow any responses to this entry through the RSS 2.0 feed. You can skip to the end and leave a response. Pinging is currently not allowed.

13 Responses to “Possession: Until Death Do You Part”