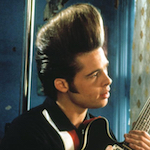 I’ve been trying to put my finger on the specific vibe I sense in early ‘90s (pre-Tarantino) indie-cinema. We hit on the topic with GAS FOOD LODGING, RUBIN & ED and NIGHT ON EARTH (though the latter is almost too accomplished a version of it to feel like the same category). These are movies that are very different from each other in most respects, but they share a lack of interest in traditional Hollywood storytelling or narrative structure. They’re a little more like dreams, or real life, or poems, or at least meandering novellas than tightly woven tales of adventure. You’re following a story, picking up on themes, wondering what it’s building to, or what it’s saying. But often you have to face that it’s more stream-of-consciousness than that. It’s not about that. It’s more about spending some time with some odd characters, in a specific place, with a distinct tone. What you get out of the experience is up to interpretation.

My instinct is to want a tighter narrative, but there’s something appealing about movies like this too. Some freedom in letting go of any expectation that it’s gonna make itself clear.

I was thinking about it last month on my vacation/Covid isolation in Knoxville, Tennessee. My aunt-in-law showed us writer/director Tom DiCillo’s third film, BOX OF MOONLIGHT (1996), because it was filmed around there. And now, coincidentally, here I am watching his debut, JOHNNY SUEDE, in the final stretch of my summer of ’92 retrospective. It was released August 14, 1992, but DiCillo says on the DVD commentary that it played for a week and a half in New York and then a week and a half in L.A. and that’s it. Somehow we all knew about it when it was on video, though.

This one reminded me a little of Jim Jarmusch with its dry humor, deteriorated New York City setting and retro-rock ’n roll pre-occupations, but there’s also a little RUBIN & ED in the cartoonishness of its lead, played by Brad Pitt (filmed right after THELMA & LOUISE). He’s a Ricky-Nelson-idolizing wannabe rock n roller with a pompadour big enough to rival Kid of Kid ’n Play’s high-top-fade pre-CLASS ACT. (And it’s real!) In the opening scene he tries to strut around a bar with immaculate Elvis-era duds except for some shitty brown loafers that don’t match. Outside on the street, a hat box containing perfect black suede shoes falls from the sky, perfecting his persona and inspiring him to rename himself. 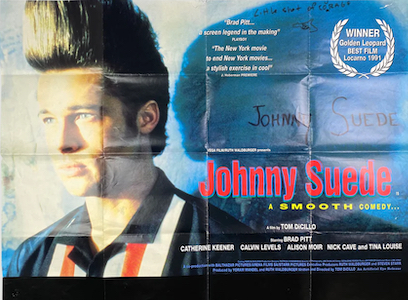 There’s no more magical realism after that, but plenty of strangeness. He dates a woman named Darlette (Alison Moir, HOT TO TROT) who already has a famous photographer boyfriend named Flip Doubt (Peter McRobbie), who she says beats her. Darlette doesn’t seem to actually like Johnny that much, and says the Ricky Nelson 45s he plays her are “kinda boring.” Her mom (Tina Louise, DOG DAY) works in the record industry and he flatters her by mistaking one of her old photos for Nancy Sinatra. There’s lots of talk about passing on a demo tape he hasn’t recorded yet.

He’s jealous of a more successful musician named Freak Storm (Nick Cave, GHOSTS… OF THE CIVIL DEAD, wearing all white and a blond wig), who he later sort of befriends and sees as a mentor or colleague, but Freak scams him for $20 and he steals Freak’s song.

He pawns his guitar, paints apartments with his “right hand man” and keyboard player Deke (Calvin Levels, ADVENTURES IN BABYSITTING), plans to buy a gun and then a bullet to rob a barber shop and buy the guitar back. They manage to get it another way, have some rehearsals, and Samuel L. Jackson (PATRIOT GAMES) is in one scene as a stand-up bass player named B-Bop.

One day leaving the subway Johnny meets Yvonne (Catherine Keener, SURVIVAL QUEST) by saving her from a pervert (Joseph Barry) trying to look up her skirt. The perv is a little person in a cowboy outfit so she at first thinks Johnny is assaulting a child. Later Johnny comes across THE TERROR OF TINY TOWN on TV and is amazed. (There was a real fascination with that movie and NIGHT OF THE LEPUS back then. Or at least with knowing they exist.)

Yvonne is a little more real than the other characters – at least enough that she rolls her eyes at Johnny for a bit before falling for him. She’s a special ed teacher who tries to let him into her life, but he gets so mad that one of her students rips the pocket on his favorite shirt that he won’t return her calls. She should’ve given up right there, in my opinion.

There’s a funny scene where Deke helps Johnny draw up a pros and cons chart when Johnny is trying to convince himself not to move in with Yvonne. One of the cons is “what if I have to make a fart,” which is written down as “things a guy does.” There’s also a surprisingly tender (but kind of funny) scene where she teaches Johnny how to finger her properly.

By the time the movie came out THELMA & LOUISE had made Pitt into a megawatt sex symbol, so it’s funny to me that his next two were this and COOL WORLD. Somehow it surprised me later when he started being funny – I guess I forgot about this and hadn’t seen CUTTING CLASS. This is also a novel use of his sex appeal since he often walks around in only his underwear but it has holes in it and it’s so loose it looks like a diaper. 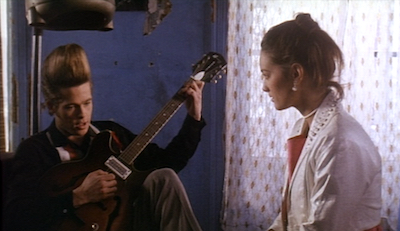 I like the combination of Johnny’s carefully maintained rock ’n roll image, his manchild dumb guy personality, and the almost post-apocalyptic feel of the Williamsburg neighborhood he roams. Every building we see seems (at best) just this side of abandoned, and when he walks the streets they’re empty except for the handful of characters he interacts with. Their rehearsal space is a warehouse with a dirt floor and it’s so cold you can see everyone’s breath. All this fits well with the music – score by composer Jim Farmer, but with lots of Link Wray playing surf guitar.

There’s a theme of male abusers that seems heavy for the oddball comedy surrounding it. Early on Johnny sees what seems to be an assault in an alley. It’s nightmarish and unresolved. He sees himself as a protector – fighting off the skirt peaking cowboy on the subway, and Darlette seems to manipulate him by telling him Flip beats her, making him angry and wanting to beat him up for her. But late in the movie, after cheating on Yvonne while she’s baking him a birthday cake, they get in a fight and he punches her in the stomach. I had been laughing about her messing up his hair – it’s throwing his shoe that sets him off, because she’s completely dismantled his phony identity – so it’s an extra shocking moment. Afterwards he talks to his asshole hero Freak about it, who tells him “You did the right thing.”

She kicks him out, but he has a dream that she comes and finds him and forgives him. Then he sees that she’s bleeding. I think it’s supposed to be sweet that he goes back to her and says, “I’m, uh, sorry.” How could you resist Brad Pitt, with that “uh” in there? But you should. He punched you, lady. I hope she knows what she’s doing.

The origins of the movie are interesting. On the commentary track DiCillo talks about moving to New York City to go to NYU Film School in the late ‘70s and being fascinated with various punks and junkies he saw around all the time. Later in acting class he created the character of Johnny Suede as “someone whose facade, whose physical appearance, is quite in contrary to his inner workings” and did a monologue as him. Years later he developed it into the screenplay, found financing, fought to cast Brad Pitt instead of Timothy Hutton, won a film festival, sold it to Miramax sight unseen. But then it sat around waiting for the right time to capitalize on the rise of Pitt, only to be dumped.

I remember DiCillo’s second movie LIVING IN OBLIVION (1995) being a big deal at the time. That’s the one where Steve Buscemi plays a director trying to make an indie movie – so it’s inspired by DiCillo’s experiences making JOHNNY SUEDE and trying to make BOX OF MOONLIGHT. It’s also the first thing I remember seeing Peter Dinklage in. (Still, it’s funny that they recently released a version with him on the cover.)

Between the two DiCillo movies I’ve watched recently I prefer BOX OF MOONLIGHT (1996), which is kind of a reverse of JOHNNY SUEDE. Instead of an irresponsible guy who prides himself on being cool, it stars John Turturro as Al Fountain, an extremely uptight engineer and factory boss. Nobody wants to be friends with him and his family seem afraid of him but on a business trip he gives a ride to a random weirdo (Sam Rockwell) who lives in a bisected house and steals lawn ornaments for a living. Due more to manipulation and awkward situations than any kind of life lessons, Al is forced to loosen up, do some crazy things (trash the factory, cliff dive in underwear, escape from police), and maybe improve his life. Instead of cheating on Catherine Keener, he cheats with Catherine Keener, which is wrong but portrayed as romantic and honestly probly the best thing that will ever happen to him.

DiCillo’s fourth film THE REAL BLONDE (1997) was also well reviewed at the time and I remember liking it, but that’s about it. Since then he’s made two more narrative features (DOUBLE WHAMMY [2001] and DELIRIOUS [2006]) plus two documentaries (WHEN YOU’RE STRANGE [2009] and DOWN IN SHADOWLAND [2014]).

I guess it makes sense that I detected a little Jarmusch in there, because DiCillo was the cinematographer for PERMANENT VACATION (due to random film school assignment), then STRANGER THAN PARADISE and COFFEE AND CIGARETTES. Also Jarmusch’s brother Tom plays a member of Johnny’s band. Everybody in that era of NYC indie film exists in the shadow of Jarmusch, but DiCillo’s got an interesting thing going too. I’m not sure what I think of this one other than I’m glad I watched it again.

Alison Moir Brad Pitt Calvin Levels Catherine Keener Link Wray Nick Cave Samuel L. Jackson Tina Louise Tom DiCillo
This entry was posted on Tuesday, September 20th, 2022 at 7:28 am and is filed under Comedy/Laffs, Drama, Reviews. You can follow any responses to this entry through the RSS 2.0 feed. You can skip to the end and leave a response. Pinging is currently not allowed.