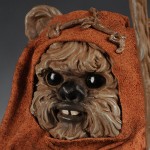 This is a picture that most people already have an opinion on, that will never change, whether they’ve seen it or not. This is only one of those opinions.

First of all, I enjoyed this picture. I laughed at some of the cornball speeches, the sometimes stiff acting, and a couple bad puns. But you know, I can get into this space ‘n robots shit sometimes, and for one main reason: Dracula. As you know from my review of Lord of the Rings Part 1, I enjoy any picture where some dude has a duel with Dracula. This one raises the bar by making the dude be a little green space-elf/Shaolin monk.

There are some good action scenes in here. The story is fun, starting out like some kind of space detective movie, with a murder mystery, an attack in the night, a chase through the big city. Obi Wan even goes to a space-cafe to get information from an old connection. Then it turns into a romance and then a full-on political picture, but more on that later.

There are lots of nuggets for the trekkies. Even ol’ Vern here enjoyed that feeling of the puzzle pieces starting to fit together, connecting this one to the other ones. You’re finding out where Darth Vader came from, where the empire came from, the stormtroopers, the helmet guy, etc. But most of all it answers that question that all americans have asked since the early ’80s: if Yoda is a jedi then where is his space sword?

And he fights Dracula.

You know what though friends I am going to take this piece to the next level. And I’m 110% serious here. While all the pussy critics are struggling to see who can seem to hate this movie the most, I am going to be the first to say THIS PICTURE IS DEEP. Accidentally, kinda, but it doesn’t matter. You see, the political themes of this picture have striking parallels to what is going on on right now on a planet not, not far away. I think Lucas was going for universal truths about the world and not specific timely commentary, but that’s what he got. There are whole books about how the PLANET OF THE APES pictures mirror the racial struggle, Vietnam war and other issues of their time, whether intentional or subconscious. Nobody will admit it but CLONE ATTACK does the same.

Let’s take a look. First of all we’ve got George W. Palpatine, the leader of a supposed great democracy, who in part 1 took office through manipulation. And he’s very popular despite being obviously evil. (I mean I don’t want to give anything away but I think there MAY be a connection between Mr. Palpatine and the mysterious evil dude in the robe who is played by the same actor.)

Then we got the Space Senate, who are repeatedly said by the jedis to be corrupt, not representing the people but taking the stands that they are paid to take. We believe in Padme’s ideal of the senate as a democratic force but we see that it’s made inneffective by sellout politicians and easily manipulated numb nuts like Senator Jar Jar.

And elsewhere we have the weapons manufacturers (the cloners, the fish people who make robots) eager to take part in the manipulation of intergalactic politics for profit. The cloners have spent nearly ten years preparing weapons for a conflict that hasn’t happened yet! Wow, how convenient that suddenly there is turmoil that all of these weapons can be used for.

Let’s face it, these are all things that we have on this planet, that are especially relevent right now, during the Bush regime. Well, except we don’t have a Senator Jar Jar. Some of our politicians are worse, in my opinion, although they walk better. But the most timely political thread of CLONE MENACE is that when the jedis see a genuine threat – like we earthlings did last september – they take charge of a powerful army and destroy all the enemies they can find. Much to Yoda’s regret. I think many of us feel Yoda-esque about the “victory” in Afghanistan, which like this first conflict of the clone war is said to be only the beginning.

Count Palpatine, just as Bush, Cheney, and Ashcroft, uses the threat as a way to scare the senate into giving him unprecedented powers, and the people willingly give up their democracy in the name of safety. They even talk about “executive orders”. But don’t worry, he loves democracy. He’ll give it back when this all blows over some day in the distant future.

In space the war was all orchestrated and taken advantage of by sinister forces within, while on earth – well, you be the judge. Anybody read today’s headlines? “Bush warned of Osama bin Laden highjacking plot.”

[UPDATE (MAY 27th) – Can’t believe I missed this, but a buddy pointed out a scene where they talk about how appalling it is that the trade federation creature “Nute Gun Ray” stays in office despite what he did in Part 1: Phantom Menace. This of course is a parallel to cases like the many Iran/Contra criminals who were pardoned by Bush I or put into office by Bush II. Apparently one of them even had a hand in the failed military coup in Venezuela.]

All this doesn’t make it a great movie but it does make it more interesting and smarter than most critics will notice. They see this as a big, dumb, empty computer movie but really, I mean can you deny it? It’s the first movie to clearly address “the war on terrorism.”

And in general I think people are being way too hard on this movie anyway. It’s funny to watch people complain about the cornball non-ironic dialogue they praised two weeks ago in Spider-Man and two decades ago in the other star trek pictures. Yeah, the delivery makes a difference, but if it’s so bad then doesn’t that make this a movie that missed the mark instead of the shocking, foul, BATMAN AND ROBIN-like pile of shit people make it out to be?

I’m not one of those “turn off your brain” morons but I can’t believe how many film snobs complain about an alleged lack of character and story in a good yoda picture like this one but have no problem with soul-less, story-less, character-less garbage like SNATCH. I mean tell me you’re not being dazzled by dumb gimmicks on that one, please. I guess it’s all about what you expect and what you want and how smart and tasteful you are, or want to appear. It’s all subjective. So nobody’s gonna be talked into enjoying this one. I thought it was some pretty good space shit, though.

AND NOW A WORD ABOUT DIGITAL PROJECTION. I Wrote a piece on this topic for The Ain’t It Cool News, but I don’t know if they’ll use it, so here’s a start. I got to see YODA VS. DRACULA projected digitally with a brand new Boeing Digital Projector at the Cinerama. I sat in my favorite place in my favorite theater, to watch this highly anticipated nerd movie on this state of the art machine that they just busted the cherry on.

Don’t listen to George Lucas, don’t listen to the hype. The idea that digital video jumps off the screen and looks more vivid than film is a huge load of horseshit. True, there are no scratches or splices. Instead, there’s fuckin pixels! It just looks like a giant tv, or computer screen. The credits look like a video game. The thx and boeing digital logos looked like screensavers. The movie itself looked digitized, like a Quicktime trailer or something. Sometimes you can forget about it in the dark parts but in the light and especially when there’s words on the screen it can be real distracting.

It didn’t ruin the movie for me but it was far inferior to real film projection. And even if they perfect the technology it’s still gonna be made out of squares. I don’t think it’s ever gonna look as good.

Remember that scene in CLONE ATTACK where the clone trooper went to pull Natalie Portman out of the sand, but they were obviously standing in front of a green screen with a digital picture of sand, and then she started walking funny to try to imitate walking in sand, but it looked totally phoney? And you were like, what is this HR Pufnstuf bullshit? Is this what it has really come to, that we can spend $120 million to make a film that is entirely shot on digital video, full of spectacular computer animated space ships and robots and all manner of soldiers and aliens and beasts and flying whatnots, an epic multi-planet story with cities and factories and crowds and… and we can’t get out a couple fucking BAGS OF SAND and make Natalie Portman walk through some sand?

It’s humbling to us humans, it brings us right down to earth. Yeah, Dr. Frankenstein, you can create life. But can you walk through sand?

Well, that’s exactly what digital projection is. It doesn’t ruin the movie, but it makes no damn sense, and it’s no substitute for the real thing. Not even close.

Christopher Lee Samuel L. Jackson
This entry was posted on Thursday, May 16th, 2002 at 7:10 am and is filed under Action, Reviews, Science Fiction and Space Shit. You can follow any responses to this entry through the RSS 2.0 feed. You can leave a response, or trackback from your own site.

36 Responses to “Star Wars: Episode II – Attack of the Clones”