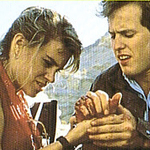 It begins in The Middle East, where an American scientist beloved by his staff and respected for his advancements in computer chip technology is kidnapped by a team of guerrillas led by a German mercenary (the original Simon Gruber). They rappel in and grab him to force his company to give them some of his chips. Because he has a photo of his son Matt (Raphael Sbarge, CARNOSAUR, THE HIDDEN II, the voice on the phone in MIRACLE MILE) at a dirt bike race in his wallet they demand that he be the courier.

We meet Matt back at home just as he’s entering an unsanctioned but highly organized motorcycle street race/obstacle course with a $100 starting bet. In my opinion this was the inspiration for the bike race at the beginning of the newer version of TOMB RAIDER. Matt’s younger sister is there with him and they seem to have a weird relationship – he agrees to give her half of his winnings just to get her to stop saying they should go home. I guess the idea is that their mom (Brooke Bundy, Kristen’s mom in A NIGHTMARE ON ELM STREET 3 & 4 and the Fat Boys “Are You Ready For Freddy?” video) doesn’t approve. But Mom turns out to be at the finish line with bigger fish to fry. She tells them about the abduction. 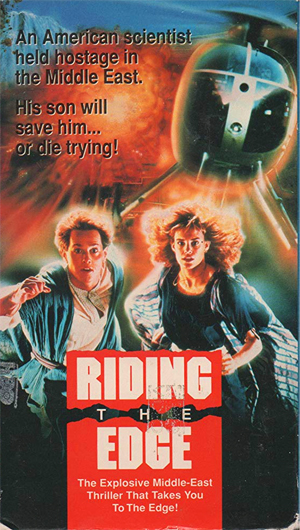 Just as you’d fucking figure, it’s treated more as a corporate emergency than a human one. The company wants to make the exchange, and flies in Matt with a motorcycle that’s supposed to be really high tech, but all it really has is a two-way radio and a tracking device.

He drives into a village, meets a guy and makes a drop, but the bad guys don’t release his dad, they just drop a bunch of his cohorts from a helicopter. Matt makes an angry speech standing casually over a dead stranger and decides to make a defiant cliff jump (on motorcycle) over the border to try to rescue his dad himself.

Stewart is obviously a bombshell, but she seemed so genuine in NIGHT OF THE COMET, so I was a little worried to see her character Maggie Cole introduced as an entitled American student throwing a tantrum at the consulate. She lost her passport but acts like they’re the ones fucking up because it takes time to deal with. Later, when Matt runs into Maggie in a small village over the border, she says some condescending things about the locals while explaining her passion for anthropology. But she turns out to be able to show him around because she’s very knowledgeable about the culture and how to fit in. Better yet (SPOILER), she shows up out of the blue to stab a guy to rescue him, and can use a machine gun, because she’s actually a customs agent looking into this whole situation. Good for her. So now we know being a jerk about her passport was part of her cover. Hopefully those were her buddies, just playing along.

My problem with the movie is that he’s not a very cool hero. Same impetuousness as Doug Masters in IRON EAGLE, but dorkier. And it doesn’t really do much with its opportunity for motorcycle action. It’s kind of cool when he almost gets decapitated by a wire. But why not some wheelies?

I guess they’re going for more of an INDIANA JONES feel. Instead of inspiration rock there’s a high adventure kinda score by Michael Gibbs (HEAT, HARD BOILED). The local children follow Matt around, one becomes his guide, he has to eat a snake to not offend the elders, etc. Of course there’s also a romance with Maggie, which comes in a goofily forced scene where he makes fun of her for having brought a pillow with her, and they wrestle and tear the pillow open and feathers come out so they laugh and then it turns into a kiss. Not entirely sold. For some reason she genuinely likes him, but when he finds out she was undercover the whole time he gets all in a huff about it and goes off on his own. A better move would be to say “What luck! My new girlfriend is a badass who can help me succeed in this life or death mission to save my father!” Fuck this guy.

Brooke Bundy Catherine Mary Stewart James Fargo motorcycle Raphael Sbarge
This entry was posted on Monday, April 1st, 2019 at 10:57 am and is filed under Action, Reviews. You can follow any responses to this entry through the RSS 2.0 feed. You can skip to the end and leave a response. Pinging is currently not allowed.

4 Responses to “Riding the Edge”