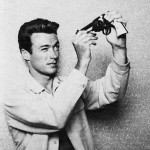 In the third Dirty Harry picture Inspector Callahan has become some sort of an enforcer, a guy who travels around enforcing things. Alot of people tend to dismiss the series after MAGNUM FORCE, and it’s true that this one isn’t as good as the two before it, but I gotta admit I like it.

Alot of the goofiest shit from ’70s and ’80s cop movies, the cliches that get made fun of all the time, might be traced directly to this movie. This is definitely a prime example of the cartoonishly out of line bureaucrats in the police headquarters who demand the police “clean up the streets” but get mad at them when they do. “I didn’t say to use violence.” It’s got the scene where he gets suspended and has to give back his badge, which is memorable because Harry calls it a “seven point suppository… you heard me, stick it up your ass!” And the opening section of the movie is about him driving around encountering different police situations unrelated to the plot just so they can show the funny/abrasive way he deals with criminals, like the guy supposedly having a heart attack in a restaurant who he kicks and tells to get up or the liquor store hostage-takers who demand a car, so he “gives it to them” by driving through the front of the liquor store. (Of course followed by a scene where the aforementioned bureaucrat yells at him with a tally of all the damage done.)

At first it looks like the politics of the series are gonna swing back hard to the right after the unexpected “you know what, maybe it’s not okay for cops to just execute criminals” questioning of MAGNUM FORCE. The villains are the People’s Revolutionary Strike Force, who seem to be some kind of SLA or Weather Underground type leftist extremist group led by a disgruntled Vietnam vet. The bureaucrats tell Harry that “the minority community” won’t stand for police brutality and we’re obviously supposed to consider that an unreasonable demand. And when the police force wants to start promoting women Harry gives voice to all the chauvinist concerns about how they might get their partner killed because they don’t know how to handle themselves. His opposition is an uptight middle aged scold of a feminist with hair and glasses like a librarian.

But of course the way you tell a story alot of times is to set up one thing and then go in a different direction. And the DIRTY HARRY series is a little smarter and a little more thoughtful than people want to give it credit for. So all of these political elements get turned around. The leftist extremists turn out to be faking their politics like Hans Grueber, they’re just in it for the money. The “minority community” gets some sympathy when Harry investigates a Black Panthers type group led by a guy called Mustapha (Albert Popwell, the guy who may or may not have felt lucky in the first DIRTY HARRY – and Harry asks him if he knows him from somewhere). Harry knows they have nothing to do with this and even gets Mustapha to agree to give him some information, but then the department has them raided and tries to pin everything on them because they had a hunch it was “black militants.”

The most central political theme is the one about feminism. A young and likable Tyne Daley plays Harry’s new partner, prematurely promoted to inspector so the department can look more diverse. Harry openly hates that she has no experience on the streets but we see in his expressions that he at least has a grudging respect for her encyclopedic knowledge of law gained from years in the records department. When they try to pin their problems on Mustapha the city calls a press conference, gives her credit, gets her in all the pictures with the mayor. I like the way the movie deals with this, not discussing it in dialogue but showing on her face how uncomfortable she is. She knows this is phony but has a hard time just walking away because it’s so important to her to be recognized as a real cop.

And over the course of the movie, of course, she proves to Harry and to the audience that she is a real cop, and she is able to represent women through her accomplishments instead of through ceremonies held by politicians.

I wasn’t sure who this director James Fargo was, so I looked him up. As some people might guess he directed some TV shows like The A-Team and Hunter. But he made sense for DIRTY HARRY because before THE ENFORCER he was an assistant director to John Sturges on JOE KIDD and to Eastwood on HIGH PLAINS DRIFTER and THE OUTLAW JOSEY WALES. (Later he did EVERY WHICH WAY BUT LOOSE.) It doesn’t look as artful as the other two but I don’t think it’s crappy or anything. The city looks good, there are lots of cool shots of Eastwood from inside moving cars, it all kicks off in a dynamic way with a dude driving fast who you assume is going to be some cool guy but then when he asks a young female hitchhiker where she’s going she says “nowhere with you, numb nuts” and the story follows her instead of the dude. Incidentally there are tight jeans butt shots for everybody – one of her, one of the male counterpart on her team. So Fargo knows what he’s doing.

The great Lalo Schifrin is no longer the composer, but they found the right replacement: Jerry Fielding (THE OUTFIT, BRING ME THE HEAD OF JERRY GARCIA). The theme is bold with a hint of Schifrin, but the overall feel of the score is more jazzy. I especially like the foot chase over buildings and fire escapes. It would feel so cliche if they used wah wahs and shit but having big band jazz and a scorching electric piano solo in the background gives the scene an original feel.

So it’s not the first one, and it’s not the second one, but I don’t care what anybody says, I think it’s a worthy third one. There are so many good touches and funny parts. There’s a scene in this one where Harry goes into a brothel looking for a certain call girl to question, and his way of not looking like a cop is to wear a Giants hat. It’s a funny idea because the hair is such an important part of Dirty Harry as an icon, so you gotta contain the hair to make him seem less superhuman. If you look back at MAGNUM FORCE and the scene where he pretends to be a pilot they use the same technique. Dirty Harry undercover wearing funny hat = automatic laugh.

Also the ending to this one is perfect. I never bought the idea of the city being willing to pay the ransom for the kidnapped mayor, it seems like a pretty forced way to prove that the authorities are sissies and Harry isn’t. But if you’re gonna go with that then what better way to end it than to have the helicopters arrive with the money as Harry is walking away, having rescued the mayor and blown up the villains already? The authorities are clueless and are speaking over loudspeakers to the dead terrorists about where they’re gonna put the money. This is funny-ironic and totally badass, but Fielding’s music is downbeat like the original DIRTY HARRY so it leaves you with kind of a sad feeling about this allegedly broken system.

Clint
This entry was posted on Wednesday, June 25th, 2008 at 7:52 am and is filed under Reviews, Thriller. You can follow any responses to this entry through the RSS 2.0 feed. You can skip to the end and leave a response. Pinging is currently not allowed.

4 Responses to “The Enforcer”