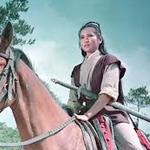 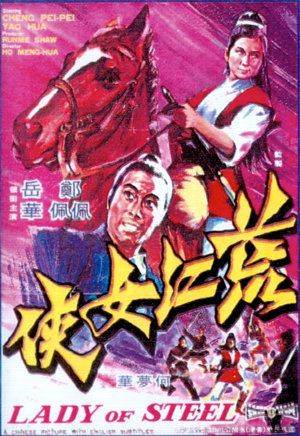 The master realizes that she’s old enough now that she’s gonna want to go “downhill” to get revenge on her father’s killer Han Shi Xiong (Huang Chung-Hsin, FIST OF FURY, THE WAY OF THE DRAGON) – whose dagger she carries as a reminder – if he’s still alive. “Even if he’s dead I still want to desecrate his corpse,” she notes. Which would be an original topic for a movie, but less cinematic.

The master would be okay with her revenge plot, except for these times we’re living in, you know? He worries that because the Jins are invading and the politicians only care about covering their own asses, “We martial artists should not just stand by and let this happen.”

“I want to serve my country even if it means death,” she says. Some RED DAWN shit. So she agrees to do her patriotic duty to deliver the master’s letter to Lord Xia (Fang Mien, FIVE FINGERS OF DEATH) in the Flying Dragon Fortress on Da Kun Mountain.

On her way there though she happens to pick an inn where some shit is going down. Master Yan is also delivering a secret message. And the Beggars’ Clan led by Qin Shang Yi (Yueh Hua, MONKEY GOES WEST) are causing a scene, demanding the room that this Tom Ying guy is already staying in. He tries to fight them off and Yin Qi sees it and, not knowing that Tom Ying was involved in slaughtering her entire family, starts throwing darts at the beggars.

Here we see not only Ying-qi’s fighting prowess, but her stealth. I love when she reveals her hiding place under this roof here.

But she’s spotted by the beggar Shang Yi, and they have a confrontation and duel in the middle of the town, leaping nimbly onto bridges and rooftops, facing off in cool poses like these:

Later she returns to her hotel room and, I mean I haven’t experienced this myself but I think it’s fair to say that if you find something like this in your room you should be careful. I feel comfortable giving that travel advice.

I’m sure some of you are like me, you have a hard time resisting a movie that has a line like “Are you using the Ice Steel Sword?” Well, this is a movie that has that exact line in it. I just love martial artists identifying each other’s specific fighting styles and weapons, especially when they have cool names like that. Another thing that’s very appealing: martial artists just hopping into and out of trees all the time, like human squirrels. It’s a world where people leap up and down the levels instead of taking the stairs, flip off of and onto rooftops, run across water, identify people by their darts and swords. And that’s a world I enjoy visiting.

Ying Qi and Shang Yi later become friends while hanging out on a branch. He confesses that he read her letter, knows about her mission and has been secretly protecting her since then because she’s “a righteous heroine.”

When she arrives to deliver the letter everybody is disappointed that it’s not the master himself coming to help them, among other things. Even though she tells them she’s priest Xuan Zhen’s student, they make her demonstrate her kung fu before they have any faith in her, so she has to leap to the top of a tree, balance on one foot on a thin branch and throw rocks at birds. Which they would never make a guy do. Let’s be honest.

But if you don’t believe me, I have evidence:

But eventually, like Dirty Harry in THE ENFORCER, everybody’s gonna have to catch on that she knows what she’s doing.

Delivering the letter was the goal of her journey, but only the beginning of her adventure. Before long she gets surrounded by like 20 swordsmen and takes them all on, and it’s not the climax yet. They try to frame her as a traitor so she throws a chair, jumps out a window and sword fights a whole mob again before stealing a horse and somehow jumping it over a tall fence.

I don’t know if she’s been trained in this, or she just figures out how to do it, but she good at disguise. She passes for male just by wearing a cool hat. I think it’s kind of like when celebrities are in public and they wear a baseball hat down low to try to make themselves less obvious.

Then she goes the opposite route, using her femininity to lure in this sucker by staking out a tea joint and playing a suggestive song.

She giggles bashfully as he follows her into the woods, then kills him. Then she’s able to pass for him just by wearing his robe – doesn’t even need the hat this time.

She also has an old lady disguise that she uses to cause a scene at a restaurant. That’s my favorite one.

And it’s interesting because many years later we would know Cheng as Jade Fox, the Invincible Jen’s wicked mentor in CROUCHING TIGER, HIDDEN DRAGON, and at that point she actually was almost as old as they made her up to be in this movie. So you can see that they weren’t too far off. She took better care of her teeth, though.

Although it answers few of the questions you may have about STEEL or MAN OF STEEL, LADY OF STEEL is another fun romp from those brothers Shaw. I’m not attuned enough to recognize a directorial voice in their productions, but for what it’s worth, director Ho Meng-Hua also did THE CAVE OF THE SILKEN WEB, OILY MANIAC and THE MIGHTY PEKING MAN (among dozens of others).

I hope it’s not condescending to say that Cheng is adorable in this. She’s out for blood but she has a childlike joy and mischief still in her. And her style is unique – a little unruly, like she’s in just a little bit over her head, fresh from the mountain in her first adventure, but she pulls it off. Not that she’s messing around. Heads will roll. Or, technically, be delivered on a platter. I really liked this one.

Cheng Pei-pei Shaw Brothers
This entry was posted on Thursday, February 7th, 2019 at 11:25 am and is filed under Uncategorized. You can follow any responses to this entry through the RSS 2.0 feed. You can skip to the end and leave a response. Pinging is currently not allowed.

21 Responses to “Lady of Steel”