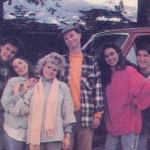 The Benzigers take their teenage kids, Brent (Matt Borlenghi, Police Academy: The Series) and Bridgett (Kimberlee Kramer, “Classroom Kid,” SISTER ACT 2: BACK IN THE HABIT), along with their friends Larry (Kevin Kaye, “Fight Announcer,” TEEN WOLF TOO) and Roxanne (Jeanne Sapienza, “Shopper,” GOING SHOPPING) on this trip which involves going to the local diner and dance hall but not much specific vacation activity. The locals all act very friendly and welcoming, but weird to the kids, especially when the parents briefly leave them alone in the diner. There’s a long, intense sequence of close-ups of people staring at them and eating food loudly until a local weirdo (George “Buck” Flower, THEY LIVE) comes over and touches one of the girls’s hair. They don’t say or do anything but there’s a closeup of Brent’s furious eyes.

The hair-touching is a weird and creepy thing to do, but we should note that Larry already looked up Bridgett’s skirt and Brent has a telescope for watching a neighbor lady have sex with the mailman. And when Larry tries to tell Brent he saw a woman being chased through the woods he says “Nice tits I bet.” So their hands aren’t exactly clean either. This was the PORKY’S decade. 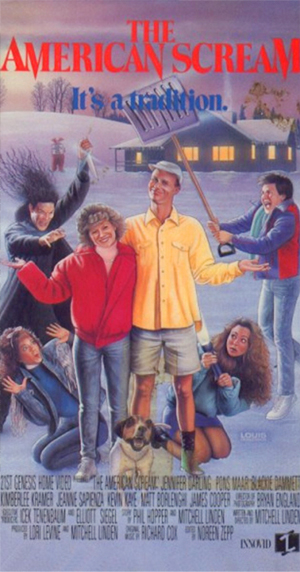 To be honest, they should’ve had their guard up before this incident. While driving into town, the kids all witness a woman being murdered in a car behind them. They scream and then it cuts away and everyone acts like they forgot about it. They don’t even say anything about it after they start hanging out with a police officer (James Cooper, “Transient,” Alien Nation: Dark Horizon).

Later, Brent brings “what we saw on the road” up as evidence that “something strange is going on here.” His argument is also supported by an incident where a guy stares at his dong in the restroom and then tries to break in when he hides in the stall and they beat his head in and, again, don’t tell anybody.

The movie’s most spectacular highlight is a complex suspense sequence involving the boys banging on the window at a strip club (a thing that doesn’t exist) trying to warn the girls as the officer walks across the club in slow-motion and meanwhile some guy is running at them with a baseball bat but the hair-toucher knocks them over and swings an ax and beheads the baseball bat guy, whose head flies up in the air and then sort of floats down and impales itself neatly on some spikes. And then Roxanne looks out the window and sees the head smiling at her and screams, but nobody else seems to notice. It’s like an awesome Brian DePalma sequence with no context and none of the pieces fitting together quite right. 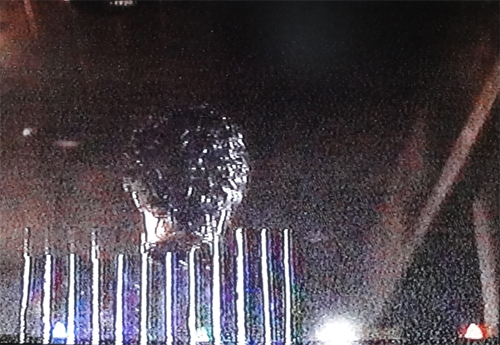 There’s also a long flashback sequence done in shaky handheld found footage style (Super-8?), so this is definitely made by people with some directorial ambitions. They just weren’t ready to live up to them.

Urban vs. rural tension is a common horror theme, but even when the country folk are straight up inbred cannibals there’s usually a sense that the city kids are intrusive tourists who almost deserve what they get. Not so much here. The townspeople seem to represent a backwards lifestyle in hostile opposition to these teens from the suburbs bringing very slight cultural changes. For real, one of the standout scenes involves everybody being outraged by Brent playing a (actually pretty decent) rock ‘n roll guitar solo at the place where everybody polkas. “Why can’t he play like everybody else?” asks one of the disgusted band members.

The most menacing person in town is a long-haired rock star looking preacher (Blackie Dammett, 52 PICK-UP, LETHAL WEAPON) who sort of stalks them and grimaces at them. In the climax, Larry (who looks kind of like a younger Miles Teller) pretends to be a Baptist minister, but the pastor seems to know he’s lying, and they go to church together and then have a fight to the death. And Larry, though basically the nerdy comic relief sidekick, seems immediately okay with having murdered somebody.

I’m unclear on what the ending means. It seems like they decide to stay and live in the town pretending to be adults. Brent wears a uniform stolen from a dead cop and seems to take on his job. Larry wears the dead pastor’s hat. I don’t know if they’re still undercover or have been doomed to replace the dead people in their roles or let’s be honest nobody really cares that much anyway, let’s forget about it.

I do sort of respect the idea of making a horror premise about being stuck around only adults. If done well it could be an appealing teen movie. It’s kind of sad to keep using the faint praise “I’ve seen worse” for Slasher Search reviews, but it does apply here. I really ought to make a chart of the different levels of slasher movie professionalism. At the top is a beautifully executed piece of art, at the bottom is completely inept swill made by clueless amateurs. This is at one of the lower levels where it’s professional enough to be watchable, but awkward and incoherent enough in the writing, staging and editing to take on a sort of outsider art weirdness. You want it to work better but you also have to appreciate the accidents that make it unique. Pretty much every piece of action, from dropping a suitcase down the stairs to all the murder scenes, is completely disorienting. Its lack of coherence almost constitutes a style.

Like many Slasher Search auteurs, writer-director-producer Mitchell Linden was a one-timer. He at least stayed in the business, working as a grip through the ’90s. In 2008 he produced the acclaimed music documentary THE WRECKING CREW!.

The cast is much more interesting. I didn’t realize while watching it, but the pastor is the father of Anthony Kiedis of the Red Hot Chili Peppers. And here’s a weird thing for you. As is common in these types of movies, the Benziger kids look a little older than they’re supposed to be playing. Still young, but old for the way all the adults are treating them (repeatedly offering them hot chocolate). And then they decide that this is a conspiracy against kids, and they thwart it by taking on fake adult personas (“I’m going for their cultural centers,” Brent says, meaning he will wear a fake mustache and play guitar.)

Nine years later Kimberlee Kramer, who played Beth, went the opposite direction in real life. Though she was in her early thirties, she found herself still auditioning for teenager roles, and she didn’t like the material so she started trying to write better roles for herself. But they were still teenager roles. Reinventing herself as an 18-year-old home-schooled wunderkind named Riley Weston, she convinced HERCULES IN NEW YORK director Arthur Allan Seidelman to shop around the script for a pilot called Hollimon’s Way, which she wrote as a starring vehicle for herself. That landed her a six figure development deal with Disney-Touchstone and a job writing for the television program Felicity. Entertainment Weekly bought into the gimmick of a teen writing for a teen show so hard that they put her on the 1998 It List of “The 100 Most Creative People in Entertainment.” “In many ways, I am Felicity,” she’s quoted as saying. “So I hope I portray this generation in a realistic light.” I am not familiar with the show but I think it was generally considered to have done a good job despite the huge disadvantage of being written by grownups.

According to the magazine’s follow-up “whoops” article, Kramer/Weston hung a TITANIC poster in her office, pretended to have a crush on Jonathan Taylor Thomas, allowed the crew to celebrate her “19th” birthday on set and even got her mom to play along, going to meetings with her like a chaperone. 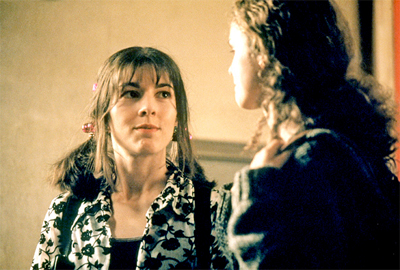 Weston contributed to seven scripts, receiving credit for the second of a two-parter about Felicity’s friend being date raped by a Tarkovsky fan, in which she also guest starred as a prospective new student (i.e. younger than Felicity). During filming of the episode, Entertainment Tonight was supposed to come to the set to do a story on her, but an ex-friend ratted her out to them. Years later, in a 2007 interview, Weston still seemed bitter toward the outer and the journalists, and continued to justify her actions as an “accepted practice” of actresses lying about their age. Reportedly her scripts were pretty good (and she has continued to work as a screenwriter and novelist), but she doesn’t seem to have a writerly self-awareness about the outlandish stunt she pulled.

In all the articles I read, I could not find any quotes attributed to Felicity co-creators turned Hollywood bigshots J.J. Abrams or Matt Reeves. But keep an eye out for a plot twist in STAR WARS EPISODE 9 where Rey turns out to be way older than she represented herself as. That would be a sign that Abrams was traumatized by the deception.

Anyway, I thought you should know about all that. THE AMERICAN SCREAM is a not very good horror movie, but it’s a not very good horror movie that stars Theodore Rex, a voice from Teenage Mutant Ninja Turtles, Anthony Kiedis’s dad and a lady that pretended to be a teen to get a job on Felicity. So it has its place in cinema history, that’s for sure.

Blackie Dammett George "Buck" Flower Jennifer Darling Kimberlee Kramer Matt Borlenghi Pons Maar Slasher Search
This entry was posted on Tuesday, October 17th, 2017 at 11:45 am and is filed under Horror, Reviews. You can follow any responses to this entry through the RSS 2.0 feed. You can skip to the end and leave a response. Pinging is currently not allowed.