It also takes place in the ’50s, and it’s kind of a fantasized nostalgia where men play 16 year old boys (director Bob Clark points out that people looked older back then) and everybody’s friends with everybody else and the boys can pull of anything and get a fantastical revenge on a seedy character they really shouldn’t fuck with if this were real life because somebody would get their legs broken. So it’s a nostalgic look at their coming of age years but it’s not the same type of nostalgia George Lucas and others of this generation had. It mostly ignores the cars, the music, the dances, the hairstyles and all that shit that usually gets fetishized in anything about the ’50s. 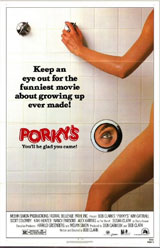 It does address the era though. There’s some casual racism by white people, and a Jew so used to being picked on that he had to learn Judo. So you know everything’s not hunky dory. In one scene, as a roomful of dudes laugh hysterically at a woman talking about dicks, the camera slowly zooms in on a smiling photo of Eisenhower.

This is about as male as a movie could be. It has a hairy chest and smelly armpits. The women are pretty much treated as pieces of ass or bitches to make fun of. Kim Catrall gets a dirty jockstrap stuffed in her mouth during sex (to be fair it has already been established that the smell turns her on). On the other hand, the women are in charge. They know what they’re doing. It’s the men who are slaves to their dicks, hopelessly chasing “beaver” like it’s the lost ark, carefully maintaining penis growth charts or finding themselves huddling together naked, excited by the sounds of fake sex in the other room. Even the big-dicked muscleman known as “Meat” is rendered helpless by the vague possibility of getting laid.

The movie’s excitement is kind of contagious. By that I don’t mean you’re gonna get a boner like the characters do, but that it’s easy to forgive how juvenile it is and get into the spirit of it. It’s all about bonding: guys giving each other shit, but also looking out for each other; playing pranks on each other, but also planning them together. According to the writer/director, the late Bob Clark, most of it – the angry husband prank, the dick in the hole, the howling sexpot, the phone call for “Mike Hunt,” the Jew and the anti-Semite bonding over a fight – came from his group of friends growing up in Fort Lauderdale. So he’s not trying to build the most outrageous gags like you would do now. He’s just trying to share funny stories about him and his buddies. Same goes for his later movies, like BABY GENIUSES and KARATE DOGS, I think. Totally autogbioraphical. I might have that wrong, I’ll have to look it up, but probly not, I’m pretty sure that’s correct. Yes, I just looked it up and it is correct. BABY GENIUSES 2: SUPERBABIES includes some composite characters but otherwise they’re all very true to the actual events, including some documentary footage of some of the dog karate, etc. Source: wikipedia.

I’m not sure how respectable PORKY’S is considered these days, but I’d say I’m pro-PORKY’S. People dig the nostalgia of Clark’s A CHRISTMAS STORY, this is that movie’s horny older brother. Because of the horniness and the movies it inspired it has a reputation for crudeness, but it’s not just some thrown together crap. On a technical level it’s not as show-offy as Clark’s BLACK CHRISTMAS, but it does have some subtly impressive moves. For example the scene I mentioned with the Eisenhower portrait, where the coaches crack up while Miss Balbricker proposes a manhunt for the penis she saw sticking out of a hole is all done in one 4 minute long take, with the coaches gradually losing their shit and the principal able to hold it in until the very end. And the big showdown in the movie is brilliant because the boys have arranged for the school’s marching band to wait at the county line for their victory over Porky. So the climax and end credits are set to the most over-the-top triumphant music of celebration possible, but it’s right there in the scene, no manipulative score or soundtrack music necessary.

Before we wrap up here I got a couple miscellaneous points to make. #1, please note that in the iconic shower peephole scene the boys are thrilled at the sight of pubic hair. I believe Pee Wee says it’s “enough wool to knit a sweater.” REVENGE OF THE NERDS had a similar voyeurism scene where Booger declared “We have bush!” I only bring this up because I have noticed from the pornography these days that the women seem to shave it all off now. What the fuck is that? I don’t get it. Public hair was once a badge of honor for young people, proof of adulthood. Now all the porn stars are trying to look like pre-teens. I guess this is just a matter of taste, I’m not gonna argue for being “more natural” or something. Or to not shave your legs or armpits. But how bout some centrism on this issue is all I’m saying. Let’s not get carried away with the grooming in my opinion.

Now, the #2 note I have is about Porky himself. He’s a great villain because the guy seems pretty real, and he’s sleazy as fuck and with his brother as the crooked sheriff the system is rigged in his favor, and these kids have to overcome him still. But you know what, man? I kind of think Porky is right, though. Here’s these underage kids coming into his bar, wasting his time with their cheapskate offer for whores, and they really do pose a threat to his business because he could lose his liquor license if the wrong people knew these kids got in. Yeah, his brother’s the sheriff, but the sheriff doesn’t control the state liquor board. Obviously it’s a real threat otherwise Porky wouldn’t back down at the end when he can’t talk about what the “youngsters” did to him without admitting that they’d been getting into his club.

So he has every reason to fuck with them, and it’s not like dumping water on them is that much worse than the pranks they constantly play on each other. He’s working in their medium, speaking their language. He does take their money, you got him on that one. And he is committing some crimes, but then so are the Angel Beach boys – underage drinking, fake IDs, lying to cops, peeping, exposing themselves. They can’t get high and mighty against Porky on some law-abiding-citizen trip.

And what do they do? They completely destroy his place of business. They literally demolish it. Even ignoring the massive property damage you gotta figure there were people inside there, they were lucky they didn’t kill anybody.

I don’t know man, when I get to part 3 we’ll see who I’m rooting for. I like these kids, but I gotta tell it like it is – they’re the wrongdoers in this “blowing up an occupied building and destroying a guy’s life for dumping water on them that one time” situation. Well executed, but unethical. As of part 1 Porky deserves his revenge.

back to school Bob Clark
This entry was posted on Sunday, September 27th, 2009 at 12:39 am and is filed under Comedy/Laffs, Reviews. You can follow any responses to this entry through the RSS 2.0 feed. You can skip to the end and leave a response. Pinging is currently not allowed.