Everybody knows there’s a TEEN WOLF TOO starring Jason Bateman. I know I personally have been aware of this fact for many years. But until this week it never really occurred to me to actually watch it. I decided to do just that, and here’s what I found.

TEEN WOLF was about a teen who turned into a wolf, and TEEN WOLF TOO is about a teen who turns into a wolf too. He’s the cousin of the Michael J. Fox character, whose whereabouts are not mentioned. Maybe they wanted to leave the possibilities open for a THREEN WOLF, or maybe they just wanted to avoid pulling a MATRIX RELOADED. The original MATRIX had such a nice open ending where you could imagine what happened next, but then they put a cap on that by showing what’s next in part 2. The TEEN WOLF saga doesn’t make that mistake, it lets Scott Howard continue his journey through your imagination.

After TEEN WOLF I like to think that Scott became friends with a werewolf nationalist student group in college and re-connected with his roots. As a Twenty Wolf he excelled at college basketball but failed to make the NBA draft. After a brief stint in the Harlem Globetrotters he fell into underground fighting circles and defeated Tong Po, but was later felled by a sucker silver bullet in the spine. Only his dad and a recast Stiles showed up at the funeral. 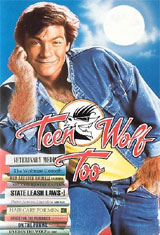 Anyway, part Too is a lazy rehash where they just changed high school to college, basketball to boxing. Teen Wolf Too even almost seems to have the same single parent as his cousin, since his parents are never shown and his uncle drops him off at college. He has the same friends (a recast Stiles and returning Mark Holton as Chubby), same coach (recast Coach Finstock now coaches college boxing), same girl problems (smart science partner likes him but he obsesses over the bitch with the better-boxer-than-him asshole boyfriend). The dean hates him instead of the principal. He finds out (later than most) that he’s a Teen Wolf Too, uses it to be better at boxing, gets full of himself and wears sunglasses, then decides to suppress and deny his true self, so it’s a happy ending. Same shit his cousin went through.

I don’t have to understand the appeal of Stiles to know that this is a lesser Stiles than in part 1. I wish they would’ve said this was Stiles’s cousin, and that the coach was the coach’s cousin. It could be a whole alternate universe of cousins. I don’t think the original Stiles would ever have this mullet. The original Stiles was more charismatic, he really took charge of everything, like he was the Mayor of Partying. This guy seems more like a delusional nerd. He thinks people like him, but I’m not sure they do. This time he sells shirts that say “Teen Wolf Too” on them. I guess he thought up that title from within the movie.

By the way, did we know in part 1 that “Stiles” is short for Stilinski? In other words, he is hiding his ethnic heritage the same way the Howard cousins are hiding their wolf powers. They’re all ashamed of where they come from.

Also of note: no vehicle surfing in this one. I’m guessing maybe some kid almost got killed copying it after part 1 or they were worried somebody would. Because otherwise they are very thorough about unimaginatively re-using every last detail of what happened the first time around.

One thing that does change from the first one is that there’s a brief stint of anti-werewolf sentiment between the time he’s outed and the time he uses it to be good at boxing. People call him a dog and infest him with fleas and stuff. Not cool. What kind of a backwards school is this? If teeny little Beacon Town is cool with werewolves you’d think a college town wouldn’t be so bigoted.

There’s also a whole thing about his science teacher who’s also his academic adviser. Even though she at first seems like she wants to do him (animal magnetism) she brings to mind the gay parallel again. She keeps implying that she understands his problem because she’s been through it. She even has a butch hair cut. Sure enough (HUGE SPOILER – I MEAN IT – HOLY SHIT, DO NOT KEEP READING IF YOU DON’T WANT TEEN WOLF TOO TO BE RUINED FOR YOU)

What you gotta wonder is how she got where she is. Did she use her wolf powers to be really good at science, but then decide to stop using The Wolf and make it on her own? Or was her thing women’s tennis or something and then she grew out of it and became a scientist and that means that Scott Howard could have grown out of basketball and gone on to make something useful of his life and maybe even be a positive role model for younger generations of wolves? And if they ever made a TEEN WOLF III: THE MARSUPIALS would she be back and if so would she be recast or would she be cousined?

Well, seems like there won’t be a part 3 for her to enjoy, but at least she got the goofiest lines in this one. She’s supposed to be a serious character so naturally she gets the most laughs:

“What’s going on here? Frog fighting in my lab?”

“You can’t face life as a wolf and expect it to solve all your problems.”

Jason Bateman is fine as Teen Wolf Too. He’s not as funny or sympathetic as he tends to be these days, but I think it’s fair to say that this was a stepping stone for him, as much of a failure as it was. Before this I just remember him playing smarmy little pricks on shows like SILVER SPOONS. Here he’s the audience surrogate, you don’t really even hate him when he becomes a dick for a while during the montages in the middle.

One of the more inexplicable scenes is the musical number at a party where he lip synchs “Do You Love Me.” I figure this was trying to imitate the famous Ferris Bueller “Twist and Shout” parade lip sycnch. But I really couldn’t tell you what the deal was with the ’80s and oldies. For some reason David Addison singing “Doo Wah Ditty” seemed cool at the time. In those days there really was no way for the average individual to actually be cool so instead what you were supposed to do was sing or lip synch a 20-30 year old song. In movies and TV they acted like this behavior was totally outrageous and I think for the most part we at home bought it. This goes hand in hand with the other type of humor in this movie, where a bowl of salad gets catapulted through the air and lands on a stuck up rich girl’s head. What a mess! Score one for the proletariat! Your whole sham of a class system is about to crumble before your eyes.

I guess I missed the screenplay credit because they had it before the “characters created by” and “story by” for Joseph Loeb III and Matthew Weisman, and before the producer. So I honestly thought it was telling me that no one wrote it. Funny, doesn’t have a loose improvised feel to it. One of my buddies said the director Christopher Leitch (writer of UNIVERSAL SOLDIER) must’ve said, “You guys’ve seen TEEN WOLF, right? Okay – action!”

I really am convinced that Loeb and Weisman didn’t write a new treatment but maybe the writer’s guild made sure they got story by credit since it is, in fact, the same story they wrote for the first one. Anyway, thanks to IMDb I learned that R. Timothy Kring, the creator of the tv show HEROES, was the writer. Nice try wiseguy, thinking you could write that movie and fly under the radar by putting your credit early instead of right before the director. You thought nobody would have to know it was you, it would be swept under the rug and eventually people would forget all about TEEN WOLF TOO. There’s only one thing you didn’t count on: advances in technology would eventually allow for the collection and widespread dissemination of exactly that type of information. Lady’s and gentlemen, we got him.

Jason Bateman unwanted sequels werewolves
This entry was posted on Friday, September 18th, 2009 at 12:20 am and is filed under Comedy/Laffs, Reviews. You can follow any responses to this entry through the RSS 2.0 feed. You can leave a response, or trackback from your own site.

24 Responses to “Teen Wolf Too”