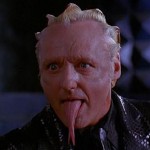 The first time I saw KILL BILL VOLUME 2, when Michael Madsen got chewed out by his boss at the strip club, I thought Who is that guy? Because he had such a presence, he seemed so perfect to play that type of sleazy (but completely justified in this case) boss, but I didn’t think I recognized him from anything. Turns out he was Larry Bishop, son of Joey Bishop. He’s an actor going back to WILD IN THE STREETS and an I DREAM OF JEANNIE episode, and the guy who directed that movie MAD DOG TIME a while back. Well, Tarantino obviously liked him so he helped him to make a biker movie, this time not just as director but as writer/director/producer/star.

Tarantino put his name on the movie as a presenter, hooked Bishop up with Dimension Films, and loaned him the use of Michael Madsen and David Carradine for a while. He also seems to be a big inspiration on the attitude of the movie, which is basically a western on motorcycles with lots of weird non-sequitur shit thrown in. The movie also has some pretty hip marketing, one of the first incidents in modern times of a movie released with a cool illustrated movie poster that remains as the DVD cover. Everyone knows you’re supposed to throw away the poster and put a shitty photoshop collage of the actor’s heads on the DVD. That’s in marketing 101. This one breaks that rule.

Okay, I can’t lie to you, after you’re done looking at the cover and put the actual DVD in your player – and after you get past the awesome DEATH PROOF trailer that looks like it’s transferred to VHS and has a cheesy ’80s style narrator – most of you will think this movie is a piece of shit. And it kind of is. Anyone who claims that Tarantino just rips off old movies and pieces them together and anybody could do it needs to compare and contrast this one with KILL BILL. Bishop also mixes and matches old exploitation shit he likes (’60s biker movies, western showdowns, softcore porn, spaghetti western music, songs that Tarantino would use in his movies) but doesn’t have the same strong narrative, memorable characters or great action scenes. It’s a simple story muddled by a way too complicated backstory and flashback structure, and with little momentum, powered only by attitude and the occasional funny or weird little moment or scene. On the positive side it’s less than 90 minutes long so it doesn’t torture you. For me it went down easy in three half hour installments.

Bishop plays Pistolero, the president of the Victors motorcycle club. He’s out for revenge against the 666’s because they burned one of his guys alive recently, and also he’s trying to find out who burned his girlfriend alive in 1976, and find her son who disappeared, and something about a key to a safe deposit box that he has in the opening scene, a flash forward where he’s been shot with an arrow and he’s saying weird shit about existentialism and then a sexy lady in white jeans sits on his face.

Pistolero’s closest colleagues are The Gent (Michael Madsen, always wearing a ruffled tuxedo shirt) and Comanche (Eric Balfour) who is also called Bix for some reason and who is also obviously the kid from the flashback, unless I misunderstood, which is very possible, although I don’t think so, but who cares, probaly not Larry Bishop, or he would’ve made a movie that seemed to care about making sense.

Or maybe he does. He says on the DVD that he originally wrote it as a 400 page novel, then a 130 page screenplay before it was this 86 minute movie. It feels more like a 5 page summary fleshed out with a week or two of improvisation out in the desert. It has kind of an otherworldly feel because although they drive around alot there are literally no characters in the movie other than the bikers or super hot babes. I don’t think they even pass another car on the highway.

By the way, a word of caution for young men considering the biker lifestyle: the ugliest woman in this movie is about a 400% improvement over the hottest biker mama you will ever even hear legends of. The camera enjoys many round butts, exposed breasts, nipples poking through shirts. There’s a bar where girls wrestle and invite bikers in for an orgy. Women writhe on pool tables begging Larry Bishop to fuck them, they writhe on motorcycles trying to seduce him with long lists of fire-related puns, they don’t mind him walking up and grabbing their crotches. Watching it I really thought he probaly just did the movie for the groping and ogling opportunities. You know, it’s the journey that matters, not the destination. But if he did write it as a 400 page novel first I guess he must’ve had a personal vision or some shit, I don’t know. So the crotch grabbing was just a bonus.

I want to go off on a tangent here for a minute. And I can, because this is America. There’s a whole lot of guitar playing on the score here, a spaghetti western/DESPERADO type of feel. I’m not much of a rock guy but there are a few guitarists I think are real good so let me say a word about a guy named Eddie Hazel. He played in Funkadelic, and he was one of their greatest assets, but even George Clinton admitted he didn’t realize at the time how good he was. After standout performances on Maggot Brain, Standing On the Verge of Getting On and Hardcore Jollies and a super rare solo album called Dames Games and Guitar Thangs, Clinton didn’t use him that much on their albums. He continued to tour with them over the years but alot of times even on Eddie’s signature song “Maggot Brain” Clinton would have other guitarists do the lead. Heavily influenced by Hendrix, Hazel still developed his own unmistakable sound, an acid drenched soulful type of soloing that sounded almost like crying at times. That seemed fitting because he had a pretty troubled life – drinking and drugs gave him stomach problems. I read somewhere that it hurt so bad while he was playing that tears would come out. His doctor told him not to tour because it was too dangerous, but he did anyway, and his friends thought he wanted to die on stage. He finally died from internal bleeding in ’92, not on stage though.

Hazel’s biggest legacy is that song “Maggot Brain.” Only the tragic figure I just described could record a song like that. It’s pretty much just Eddie playing a solo for 10 minutes, but it never gets old. The story goes that Clinton asked him to play like his mother just died, and man, I believe it. Also they say the band were all high out of their minds and Clinton thought everybody besides Eddie sounded like shit so he turned them way down in the mix. Whatever happened, it’s one of the best guitar solos and purest musical expressions of emotion you’ll ever hear.

The reason I bring it up is I think HELL RIDE is the first time I’ve ever heard “Maggot Brain” used in a movie. But it’s used for a scene where Pistolero does peyote (where else?) out in the desert. It actually works pretty well in the movie, and people that aren’t familiar with it will probaly just think it’s the score. I know Eddie did alot of drugs but I don’t know man, that song is so pure, it kind of offends me to use it for a getting high scene. Oh well, better than a car commercial.

And now I have returned from my tangent. Every once in a while something pretty badass happens in HELL RIDE to keep you interested. I like the scene where Balfour breaks a bottle over Madsen’s head, then throws down a playing card with “GET OUT OF JAIL FREE” written on it. Why didn’t I ever think of that? Balfour proves his grit by peeing on Dennis Hopper’s boots while Hopper threatens him at gunpoint. Vinnie Jones shows up occasionally, says the word pussy about 50 times and shoots several people with a rifle that fires arrows. Later he gets a severed head delivered to him in a picnic basket. (possibly a reference to a Yogi Bear episode I haven’t seen.) In one scene Bishop and Balfour have a conversation that’s important to the narrative, meanwhile Madsen is sitting in a tree in the background. He blows into his beer bottle and says, “Look, I’m an owl.”

It’s a weird combination of kind of good and really terrible, which to me somehow combined to form surprisingly watchable although not good per se. It has the elements of a type of movie that is painful to sit through (like, say, SOUTHLAND TALES, or some of the later David Lynch movies if you’re not into them). But it’s not hard at all. The story, such as it is, ends satisfactorily, it doesn’t linger too long after that, and it has a pretty great final line. So what the hell. The ride wasn’t too hellish for me.

self-indulgence
This entry was posted on Tuesday, October 28th, 2008 at 8:09 pm and is filed under Reviews, Thriller. You can follow any responses to this entry through the RSS 2.0 feed. You can leave a response, or trackback from your own site.