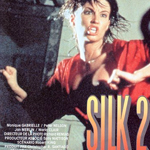 She has a much older partner/best friend named Chris Meadows (Bon Vibar, CAGED HEAT II: STRIPPED OF FREEDOM) who is celebrating his impending retirement, and you know what that means. The funny thing is he’s killed because of an old Yakuza debt, so the retirement is really unrelated, it still would’ve happened if he’d left the danger behind years ago.

Anyway, as he dies he makes Silk promise to return some ancient Japanese scrolls to his old friend Kashi Hashimura (Joe Mari Avellana, “Yashi” in the first SILK, different characters in BLOODFIST I and II), so that’s her main mission for this movie, which must be accomplished while on leave for two weeks. This puts her at odds with Hancock Gish (Jan Merlin, HELL BENT FOR LEATHER), a corrupt white collector of “Oriental art.” He sends lots of guys to try to kill her. 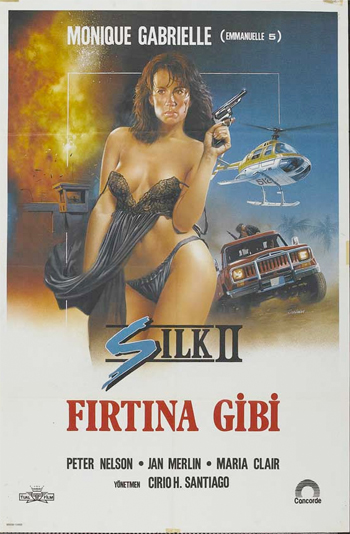 Despite all the enemies, Silk is really good at making friends. For example the cab driver (Jimmy Fabregas, VIGILANTE) who is thrilled to be involved in a chase with her. At first it scares him that guns are being fired, but then he says “We’re making Dirty Harry look like shit, aren’t we lady?”

Also she meets vacationing college girl Holly (Maria Claire, SOCIETY, SLUMBER PARTY MASSACRE III) on the plane to the island. They hang out together and then when Holly gets stuck in the middle of a chase she sort of becomes Silk’s sidekick. Also there’s Tony (Peter Nelson, V, THE LAST STARFIGHTER, DIE HARD 2, DOUBLE TEAM, KNOCK OFF), an expert Asian art authenticator who Silk introduces herself to in the parking lot after seeing him make a big scene yelling “BULLSHIT!” at Gish during a museum presentation. We see him much earlier, appearing to be the wacky comic relief character, since he’s chewing a giant wad of gum and wearing a loud Hawaiian shirt unbuttoned over a Spam logo t-shirt. But pretty much as soon as he’s alone in a room with Silk it’s Shannon-Tweed-movie-style soft focus slow motion rolling around and kissing her boobs during alternating guitar and saxophone solos.

I didn’t really get it out of the first one, but this series is promoted as a cop movie mixed with a softcore erotic thriller type deal. You’d be fast-forwarding an awful lot if you’re only interested in the latter, but they definitely consider it a high priority to showcase Gabrielle’s body in tight clothing and a couple nude scenes. There’s one where she’s taking one of those movie showers where a woman closes her eyes and tips her head back to sensually enjoy the act of self hygiene maintenance, and a guy breaks into her house. It keeps cutting back to her to show that she is unaware of the intruder and still quite naked. But when he decides to invade the bathroom she suddenly appears behind him in a dragon-embroidered silk bathrobe to kick his ass. There’s a furniture-wrecking living room martial arts duel and I’m only a little ashamed to admit that this is my favorite scene because the slo-mo spinkick with boobs hanging out knocking the guy across the room and onto a glass table is the perfect expression of those action/sexiness combo intentions.

I’m not sure if you’re supposed to notice, but her boss (Ken Metcalfe, FIRECRACKER, ENTER THE NINJA, NAM ANGELS, ANGELFIST) is real condescending, keeps calling her “young lady” and after removing her from a case says, “Just be a good girl, go home, relax.” I would say the movie, though undeniably objectifying her, respects her more than the captain does. She is very capable, never gets manhandled and is never judged for her sexual activity. I’ll go ahead and judge her a little, though, because the scrolls totally got stolen from her hotel room when she was writhing around with Tony across town. Shoulda kept her eyes on the prize.

I could do with more action, but there’s a bunch of good stuff. The opening is one of those deals where the cops have a place surrounded but she gets impatient and runs in, so she and Meadows alone have to take on a bunch of gunmen. The best move in that scene is when she leaps over a desk, goes head first through glass and lands in a somersault. My favorite action scene, though, is the foot chase of random armed robbers in Halloween masks. One of them hides behind a parked car and her shotgun causes the car to blow up. Then the guy steals a Jeep and drives at her. 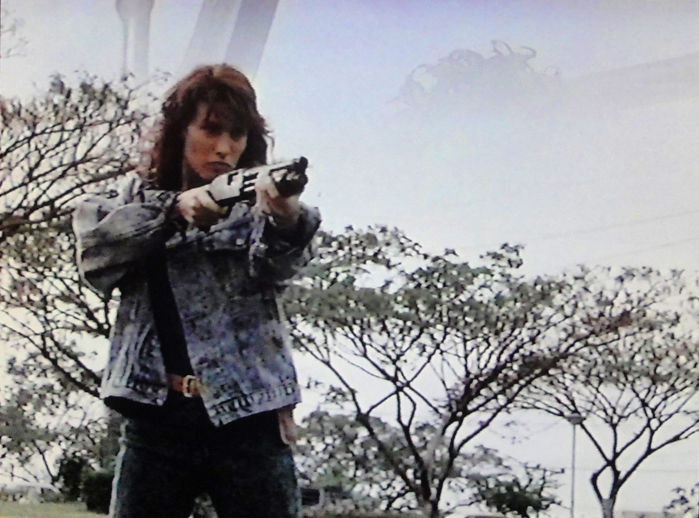 She tries to shoot but is out of shells so as a plan B she does a flying kick through the windshield into the guy’s face. A+.

And like BLACKBELT II (featuring an appearance by the original Silk) it’s a weirdly downbeat ending. SPOILER – Silk, Tony, Holly and the scrolls all manage to make it out of the museum before it explodes and explodes and explodes and explodes into several giant fireballs over and over again. But Tony asks “Where’s Kashi?” and Silk nods at the destroyed building. Then it freezes on her face and goes to the credits.

The whole movie was about trying to return the scrolls to this guy! She kills some bad guys but does not, and cannot ever, fulfill that last promise to her dead friend. Bummer.

Random thing I noticed: both the police station and the room where Meadows is being held hostage at one point have a jar of Nescafe in the background. Is it a clue? No, it must just mean Nescafe was popular in Honolulu at that time, at least among cops and robbers.

This is another Cirio H. Santiago joint, but the writer, Robert King, has a hell of a resume, with credits on BLOODFIST, PHANTOM OF THE MALL: ERIC’S REVENGE, the Dana Carvey movie CLEAN SLATE, the Michael Keaton/Geena Davis movie SPEECHLESS, CUTTHROAT ISLAND, RED CORNER and VERTICAL LIMIT. More recently, he and his wife Michelle created the hit show The Good Wife, which lasted for seven seasons.

Although I much prefer the look and style of SILK, I’m happy to say that SILK 2 is overall more entertaining. And although its theme song does not match the original, it’s way better than most. “It used to be a man’s world / Now it’s changin’…” You can sort of get a taste of it in this trailer:

Bon Vibar Cirio H. Santiago Hawaii Jan Merlin Jimmy Fabregas Joe Mari Avellana Ken Metcalfe Maria Claire Monique Gabrielle Peter Nelson Robert King
This entry was posted on Thursday, March 16th, 2017 at 10:46 am and is filed under Action, Reviews. You can follow any responses to this entry through the RSS 2.0 feed. You can skip to the end and leave a response. Pinging is currently not allowed.