But not until the last 25 minutes or so. That’s what’s unique and (I admit) disappointing. Most of the running time is spent fucking around, getting into trouble at bars or visiting their Vietnamese girlfriends. Very little of the backstory is explained – it seems like most or all were soldiers before, but it’s not clear how or why they came back. They don’t show them being tracked down in the U.S. and pressured to join. They’re already on board at the beginning. 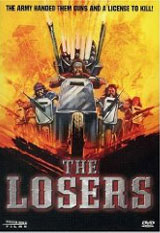 I like the melodrama though – these guys clashing with their military overseer about their lack of discipline, about race, about whether they can be trusted not to run off before the mission. One guy wears a (backwards) swastika, as dumb bikers often used to. It’s weird to see a war movie with a good guy wearing one of those. He wears it on a headband and then on his helmet. In war it turns out bikers wear full helmets, they’re not as self conscious. Safety first, bikers always say.

The lead is William Smith as Link. I always like him in movies but always forget it’s the same guy. Watching this I liked him but forgot he was the cool driver in Cronenberg’s FAST COMPANY and Clint’s opponent/ally in ANY WHICH WAY YOU CAN. Here he looks like a bodybuilder but seems believable as a biker. He’s also the most interesting because he has some kind of past with this guy they’re trying to rescue, Chet Davis, and it seems like he’s just on the mission so he can beat up Chet Davis.

The director is Jack Starret, the guy who fell out of the helicopter in FIRST BLOOD and also directed CLEOPATRA JONES. Strangely he also plays Chet Davis, so these guys are on a mission to save their director.

It’s weird because this seems like a perfect B-movie concept, but aside from some pretty cool motorcycle mayhem at the end it doesn’t exploit the absurdity of the idea all that much. This was before the formula was really set in stone with UNCOMMON VALOR and movies like that, plus it was made while the war was still raging, so it would’ve been hard to have more fun with it I guess. It ends with shots of all the deaths over a sad folk song, which is a little corny now but must’ve been powerful when it came out in 1970. 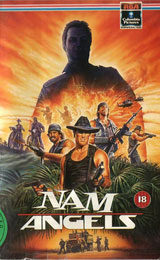 THE LOSERS was also sometimes called NAM’S ANGELS, so I had some confusion as to whether or not there were two movies with this premise. Sure enough there is a rip-off called NAM ANGELS and made in 1989 by director Cirio Santiago (TNT JACKSON). In this version they’re not vets but Hell’s Angels stirring up trouble in the bars of Vietnam. They all get locked up after a drunken brawl with Special Forces guys. Another soldier named Calhoun (Brad Johnson) is impressed by their toughness and decides to recruit them for a mission. He tells them it’s about some gold they found but his real objective is to have them rescue some POWs in the same area as the gold. He figures he’ll tell them later.

This is much more of a traditional action movie with the recruiting, bonding over the death of one of the bikers, realizing they should stop fuckin around and do heroic shit with their lives, etc. Also lots of action and a cartoonish villain, Vernon Wells as a former soldier now considered a deity by a primitive tribe and living with a code of honor. But still evil. He sells POWs to the VC so his only real motivation is money and competition. He considers himself to be playing a game and when he faces off with the Calhoun he drops his gun and has an honorable spear duel.

I think Calhoun is supposed to be kind of a musclebound Indiana Jones – he wears a cool hat and black muscle shirt and uses whips and lassos all the time.

This is a low-rent movie, the kind of thing where Vernon Welles can yell, “You may be a worthy adversary, Calhoun, but you’re a DEAD MAN!” and it will not sound that out of place because most of the dialogue is like that. THE LOSERS looks better, has better acting, more developed characters, better music and it seems more heartfelt with its anti-war sentiments and concern for the bikers being with the women they love and all that. But NAM ANGELS is kind of more fun. During the opening combat scene I was worried I wouldn’t be able to get through the movie without getting too bored and turning it off, but it quickly captured me.

Also it has funny opening credits with the title on a Harley Davidson shield that just says “MOTOR CYCLES.”

So if you really do a double feature (which you probaly shouldn’t, to be honest) watch NAM ANGELS second.

bikers Cirio H. Santiago Jack Starret Vernon Wells Vietnam William Smith
This entry was posted on Saturday, June 20th, 2009 at 12:53 am and is filed under Action, Reviews. You can follow any responses to this entry through the RSS 2.0 feed. You can skip to the end and leave a response. Pinging is currently not allowed.

6 Responses to “The Losers vs. Nam Angels”