I should mention that when I say he emailed me “recently” what I mean is that the email is dated November 1st of 2005. But I mean, that’s late 2005, at least it wasn’t January of ’05. Cut me some slack. Anyway don’t ever say I don’t follow through.

In the U.S. most of our crime movies are fantasies, stories about relatable hitmen and high tech heist masterminds who only exist in an imaginary world inspired by old movies inspired by old pulp novels. Alot of times they have a hook to them like “wouldn’t it be funny if a hitman was forced to run a women’s shelter?” or “wouldn’t it be cool if they robbed a bank using stolen military drones?” or something. But back in the ’90s we had a wave of gangster movies including John Singleton’s BOYZ N THE HOOD and Albert and Alan Hughes’s MENACE II SOCIETY that came disguised as warnings of “shit is fucked up right now in South Central.” They would kind of dip into the exotic dangers and then end on a preachy note about “we gotta clean this up, people!” I mean, they were sincere, but they were also having a good time. They were entertainment with a little church at the end.

SECUESTRO EXPRESS kind of reminds me of that type of movie. Like CITY OF GOD and ELITE SQUAD for Brazil, this one is kind of telling us how fucked up shit is in the high crime parts of Venezuela. It’s telling us that the division between rich and poor is causing violent clashes. But at the same time it’s trying to be a cool crime movie. 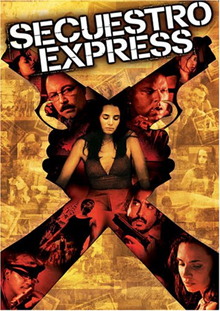 It’s also the opposite of the last kidnapping movie I watched, THE DISAPPEARANCE OF ALICE CREED. That was about a pair of highly prepared professionals trying to carefully pull off a high stakes crime. This is just a group of reckless thugs picking out the couple they see getting into the nicest car outside a club. It all takes place over a couple of days as they drag the couple around to different filthy squats, torment them, get some drugs, bribe some cops, yell and point guns at each other, etc.

So The Kidnapping Express is similar to the Polar Express, except instead of a train full of children traveling to a magical land of Christmas it’s a van full of sweaty, drugged out hoods taking pills, threatening rape and firing guns at transvestite prostitutes on the sidewalk. And no Tom Hanks.

Actually a better translation of the title is Express Kidnapping, which is what they call this crime of kidnapping people for a couple hours for whatever hostage money they can scrounge up. It’s closer to a carjacking or a home invasion than the Lindbergh baby or something. It’s a convenient crime for criminals who don’t enjoy intricate planning, and in the movie they make it into kind of a hybrid crime where they drop the man off for a half hour to be raped by a dude in exchange for a bunch of coke. It’s a kidnapping/pimping/raping/drug-deal, so in that sense Secuestro Express is the KFC/Taco Bell Express of crime.

Although it starts out seeming pretty gritty and realistic, I’m guessing this is pretty exaggerated. It’s kind of funny actually, the crime is so bad here that when they make their hostage get money out of the ATM another thief doesn’t realize it and tries to stick him up. They actually shoot a guy to get their kidnapping victim back. You can’t re-kidnap, can you? Forced transferring of custody from one kidnapper to another? Also they get their car stolen.

And there’s a pretty far-fetched plot twist to increase the character conflict a little. It’s funny when the kidnappers start feeling bad for the girl and telling the guy how to treat her better. But some unlikely things happen. Before that the power of the story is that it’s not supposed to be unique. You’re not watching this because it’s some unusual crime like the Zodiac killer or something, you’re watching because this is a common occurrence, this is how shit goes down, supposedly.

Stylistically it’s pretty spazzy, with a whole bunch of show offy split screens, slo-mo, fast-mo, fish-eye-lenses, extreme closeups, POV shots, bulletish time and all that stuff. It has freeze frames telling their names and backgrounds as they’re introduced, to be like CITY OF GOD being like TRAINSPOTTING being like whatever they got that from. But the photography looks rawer and cheaper than most of the slick movies that use this stuff, so instead of seeming like some jerks not trusting my attention span it felt to me like some underdogs working hard to make their movie look like what the big boys do. It makes you realize how much those filmatistic techniques spread not just through Hollywood but all over the world, from country to country. I think they have enough control of it here that it works fine.

The movie has a weird connection to Robert Rodriguez. His at-that-time-wife Elizabeth Avellan was the executive producer, and his long time editor and MACHETE co-director Ethan Maniquis is the editor. So that got me thinking about Rodriguez making EL MARIACHI the way he did, how it would be easier and even cheaper to make now because he could shoot it and edit it digitally, but then he’d be tempted to throw in a bunch of unnecessary flash that could’ve killed it. The Avid Fart Syndrome, or AFS – because you can do anything now, you are less likely to restrain yourself to good taste. In the EL MARIACHI days I don’t think he was showing restraint, he was just basing his style on the limitations he had. In a way the less limitations we have the harder it is to do well.

Anyway, I got off topic there. I wouldn’t say this is as good as most of the movies I’ve compared it too, but it’s a solid movie with an interesting look into and expression from a part of the world I don’t know much about. Thanks Ricardo. Thanks Venezuela. I hope the crime and stuff has improved since then. I mean I know it’s only been less than six years, that’s not a long time at all, pretty short actually.

kidnapping Venezuela
This entry was posted on Thursday, July 21st, 2011 at 1:51 am and is filed under Crime, Reviews. You can follow any responses to this entry through the RSS 2.0 feed. You can skip to the end and leave a response. Pinging is currently not allowed.