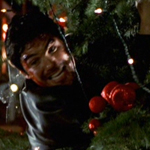 BUT! He sees the supposedly-retired thief Jimmy Scalzetti (Eric Roberts, CHRISTMAS IN COMPTON, SO THIS IS CHRISTMAS, ALL AMERICAN CHRISTMAS CAROL, A HUSBAND FOR CHRISTMAS, SANTA’S BOOT CAMP) strolling in looking all tough and intent on something and clearly not there to shop for holiday gifts or trenchcoats, which they are stocked up on. He follows them into an employees only hallway and sees that they’re there to rob the place.

Some of the random shoppers and employees in the mall are introduced so that they can be taken hostage. There’s a weird bit where the mall Santa (Jack Wallace, DEATH WISH, ABOVE THE LAW) ends his shift and immediately takes off his beard and drinks from a flask in front of everybody. Luckily he has a real beard so when an obnoxious little girl (Jessica Smith I think is the actress?) sits on his lap and Veronica Salts him about her Christmas wishes he doesn’t break kayfabe.

These and a couple other people and Cat end up locked in a room together as hostages, but most of them don’t get rough up too much, they just treat it like they’re waiting for a power outage to end or something. Meanwhile, Cornelius battles the various henchman, tries to get help, bargains to have Cat released, sets up booby traps, etc. One of the bad guys (Richard Yearwood, STREET LAW) is an explosives expert, which I only mention so I can tell you that his name is Kid Blast. 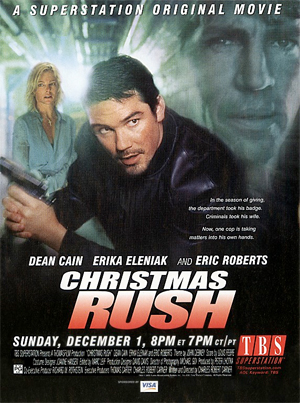 Cornelius gets scraped up and bloody like John McClane, but most of the action involves bullets firing and hitting things other than people. They make sure to destroy plenty of mall property: windows, display cases, mannequins, a giant gumball machine, a cardboard standee. Cornelius uses a bottle of perfume from the makeup counter to create a slipping hazard, a rack to break through windows, a hockey stick and bow and arrow from the sporting goods store as weapons. He also steals guns and ammo – do they really carry that in Chicago malls, or did they just get that from DAWN OF THE DEAD?

One showdown happens in an electronics department, where DESPERADO is playing on a projection TV. The gunshots and explosion in the scene coincide with what’s going on in the store.

There’s also alot of Christmas stuff: a Christmas play at the beginning, a mall Santa as one of the hostages, Morgan hanging from an angel decoration, falling onto a Christmas tree that collapses onto a Christmas village (thankfully missing the Nativity scene) as he falls into the fake snow and a “Peace On Earth” sign collapses (thanks for the idea, JURASSIC PARK). Jimmy has a “Jingle Bells” ringtone. Cat sits with the other hostages, turns the Christmas lights on and has everyone take turns telling stories about their best Christmas ever.

This is a little bit more Christian than most movies. She wears a very noticeable crucifix, and says a prayer for everybody. There’s also a weird comment early on where Morgan smirks that it’s politically incorrect to say “Merry Christmas,” ha ha ha. But Cat is totally okay with one of the other hostages saying he’s Muslim.

Anyway they fight through the mall all night and then they have a go cart chase through subway service tunnels. The action is okay, but the character doesn’t have enough personality, and Cain is not cool enough, to carry such a formulaic (and also watered down for television) action vehicle.

One good thing: from the slow motion glory shot entrance of the villains, the high amount of bullets fired and especially the personal bond between the hero and villain, I suspect the filmatists took some small inspiration from the Hong Kong action cinema. I’m not saying they quite capture that tone, but it reminded me of it a little. Cornelius and Jimmy have kids that go to the same private school, and they see each other at the Christmas recital before the shit goes down. Cornelius happens to overhear him talking about his kid needing a bone marrow transplant and looks concerned for him.

I did not recognize the name of writer-director Charles Robert Carner, but holy shit: he wrote GYMKATA and BLIND FURY! As a writer-director he’s responsible for the TV remake of VANISHING POINT (starring Viggo Mortensen, Steve Railsback and Jason Priestley) and WITLESS PROTECTION (starring Larry T. Cable Guy). Cinematographer Michael Goi shot the stunning looking remake of THE TOWN THAT DREADED SUNDOWN. Action/fight coordinator Tommy Chang is I think a good zombie actor, because he did stunts in DAWN OF THE DEAD, LAND OF THE DEAD, DIARY OF THE DEAD and SURVIVAL OF THE DEAD.

The most unique thing about the movie – probly the only unique thing, actually – is the big-hearted ending. Cornelius very sincerely tries to convince Jimmy to surrender, but Jimmy tries to run and gets shot. He embraces Cornelius and whispers about his boy as he dies.

Then Morgan and Cat are at the hospital checking on Jimmy’s son when the chief comes and tells him he’s no longer suspended and the mayor is gonna help with the lawsuit and he got a promotion and oh yeah one other thing here’s a reward check for $200,000… which he hands to Jimmy’s widow to pay for the kid’s treatment.

And then it ends on the Morgan family’s Christmas dinner, where they pray for Jimmy and others who didn’t make it. Somehow Carner and the Super Station people managed to blend the traditional DIE HARD ripoff with the wholesome Lifetime style Christmas movie. This is corny as hell, but at least a little novel, and in keeping with Christmas themes of giving and good will toward men and all that shit. That also comes up when Cornelius rescues Cat but she convinces him they can’t leave without going back for the other hostages. (The little girl thinks he’s “the Angel of Mercy” that Cat prayed for.)

I don’t know why it’s called BREAKAWAY, and I’m sure the idea of retitling it was to make it appropriate for year-round viewing. But that’s kind of a mistake I think because being a Christmas action movie (even though it’s a lower tier one) is the only reason to really watch it. I can’t say it’s good enough to recommend as part of your annual holiday viewing, but if you run out of DIE HARDs and Shane Blacks and what not you could try this before resorting to the Hallmark Channel.

Charles Robert Carner Christmas Christmas action Dean Cain Eric Roberts Erika Eleniak made-for-cable-movies
This entry was posted on Friday, December 23rd, 2016 at 4:04 pm and is filed under Action, Reviews. You can follow any responses to this entry through the RSS 2.0 feed. You can skip to the end and leave a response. Pinging is currently not allowed.

8 Responses to “Christmas Rush (a.k.a. Breakaway)”