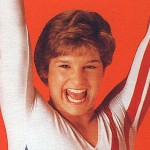 What else needs to be said?

This makes me giddy the same way Neill reviewing 300 did. Sometimes the right reviewer gets hold of the right film, and the result is… well, see for yourself:

I believe Donald Drunko was the name of the wiseguy talkback newsie who kept bugging Harry and Moriarty to review the GYMKATA DVD, and then roped me into it. If so this is for you, Drunko. Don’t get me wrong, I was happy to perform this important service. Number one, I am a positive individual so I try to give back to the community. Number two, I always meant to see this horse shit anyway.

GYMKATA is the 1985 picture by Mr. Robert Clouse, director of ENTER THE DRAGON, BLACK BELT JONES, CHINA O’BRIEN and various other American martial arts pictures. Unfortunately he must’ve hit upon some hard times during the Reagan years because here he is rehashing ENTER THE DRAGON but instead of finding a cool new martial artist to star in it he got a gymnast. Kurt Thomas was a world champion and was expected to win a gold medal in the 1980 Olympics, but the US team boycotted over the Russian invasion of Afghanistan. If he had gone maybe he would’ve won, but maybe he wouldn’t have and people woulda been disappointed, the shine woulda been gone on him and nobody would’ve wanted to make GYMKATA. What I’m saying is this movie and Osama bin Laden are both unintended consequences of the same conflict. And I can say objectively that the better of the two is GYMKATA. GYMKATA is better than Osama bin Laden.

Now, alot of you may not know this about me but I have a little inside knowledge of this material because I was involved in competitive men’s gymnastics, qualifying for three regional competitions and placing in two between 1977-1982. Because of this background, my experience viewing GYMKATA may be a little different from– nah, just fucking with you, actually I forgot there even was such a sport as men’s gymnastics so bear with me if I make any incorrect statements.

Based on the novel “The Terrible Game” by Dan Tyler Moore, GYMKATA is the timeless tale of, well, ENTER THE DRAGON but with all the good elements replaced by bullshit. It starts out intercutting the dude spinning on bars with some guys riding horses (what is this, an Ed Wood movie?) but then becomes ENTER THE DRAGON, with some prissy government bureaucrat guy recruiting Kurt to go to some backwards fictional country in Eastern Europe called Parmistan and compete in a deadly tournament. But instead of Bruce Lee you get fucking Kurt Thomas. Instead of the most iconic martial arts scenes ever put on film, you get some asshole spinning around on a bar pretending to kick a dude. Instead of a martial arts tournament you get an obstacle course race (in the movie they call it “The Game,” but in modern society we call it “Real World Road Rules Challenge.”) Instead of a great villain like the metal-clawed Han, you get the Clouse regular Richard Norton, who just looks like any other bearded white karate dude from the ’80s except he has a little braid on the back. And a dangly earring. Instead of cool henchmen like Bolo Yeung and Sammo Hung, you just get some dipshits in executioner masks that are supposed to be ninjas because they shoot arrows every once in a while.

Alot of people forget this, but ENTER THE DRAGON has a good supporting cast too. Bruce is obviously the main show, but Jim Kelly is in there and he gets some good lines. And you even got John Saxon. This one has a bunch of nobodies that get one line before they get impaled, fall off a cliff or are found dead without you even getting to see it. So there’s nobody to carry the gymnast. He’s gotta stand on his own two feet and that’s something the guy just can’t do. Maybe the most telling moment is when the race begins and he is immediately in last place and running like a girl. After about 20 feet he falls down for no reason, and a big dude named Thorg (Bob Schott, another Clouse regular) notices so he turns around and kicks him in the face.

Let me repeat that. The so called martial arts hero of this movie is such a fucking sissy that he can’t run 20 feet without collapsing to the ground and getting kicked in the face. And this isn’t at the beginning before he toughens up, this is the start of the climactic race. Maybe they shoulda got Mary Lou Retton to star in this thing. This is what we get in a permissive society that allows THE KARATE KID to become a major cultural milestone. That’s why even though ENTER THE DRAGON, BLACK BELT JONES and THE BIG BRAWL
all had funky as hell theme songs, this one doesn’t. The score is fine (especially considering the era we’re dealing with) but it has no funk. Because it stars Kurt Thomas. It doesn’t deserve funk.

See, gymnastics are obviously a good skill, all the great martial artists do flips and shit. But the thing is this guy can only do the flips. The kicks and the punches are not so convincing. Worse, he just looks like a complete dipshit. There is nothing tough about this guy at all. And that’s why America loves it.

Okay, I had to criticize this movie for being such a low point for Robert Clouse, but I can completely understand why some of you people love this movie. I’m not sure it’s up there with ROADHOUSE or ON DEADLY GROUND in laughs or admirable sincerity, but this is definitely a funny straightfaced action movie. I mean, at one point Kurt Thomas gets chased down an alley and finds a bar perfect to jump up on and spin around. At another point he is surrounded by a crowd of criminally insane cannibals, but happens to be sitting on a stone something or other with handles just like a pommel horse, so he starts gymnasticking everybody in the face. This is good shit.

Also, I counted at least 5 parts where somebody is thrown off something tall and does a funny dubbed scream.

Most of the non-gymnastics action scenes aren’t as funny. But there’s a pretty entertaining section where the race goes through “the village of the crazies,” where Parmistan sends their criminally insane. These guys just stand around laughing and making bird sounds and they attempt to mutilate any outsiders. I’m not clear whether this is what they do 24-7 all year round or if they just pull out all the stops once a year when The Game comes to town. But this is crazy town so some crazy shit goes down here. A guy in a monk’s robe gestures to come through a door, and Kurt (who, by the way, is a complete idiot) is about to follow. Then the guy turns to open the door and we see that the back of the robe is cut open to reveal his bare ass. Which means he’s crazy.

These crazies have some good ideas though. They send vicious dogs after Kurt, which would make the Olympics more entertaining, but they don’t listen to the crazies, they’re stuck in their boring old ways. Kurt also gets chased through a pig pen and has to climb over pigs, but as far as I can tell they are just regular pigs and not crazy pigs that have been cast out. As Kurt climbs out a window he looks down and sees the crazies about to stab Thorg with pitchforks. Kurt has this look on his face like he knows he has to intervene, this guy tried to kill him but it is only right to save his life, and then maybe all will be forgiven and they’ll work together to survive this deadly challenge. But that’s not what he does, he just watches as they kill Thorg. Remember, this is Kurt Thomas we’re dealing with, he’s not gonna be able to save somebody unless doing a flip or spinning on a pole is what can save them. Even then, he might boycott.

The part I really don’t get is the weird guy with the blank expression standing up against the wall. After a while he turns around and you realize the weird face you’ve been staring at is made out of rubber and attached to the back of this guy’s head. But I don’t think it’s supposed to be a mask, I think he has two faces, like Barbra Streisand’s mirror. So they send people with birth defects to the village of the crazies too? This is very strange for this type of movie, I gotta commend it. However, having just watched EL TOPO again recently I’m thinking they could’ve gone even further. Maybe a dude covered in bees jerking off or something, I don’t know.

In the end of course Kurt wins The Game, and some text on the screen tells us that the government got their way and was able to use Parmistan to launch a “Star Wars” defense satellite. In ENTER THE DRAGON they’re actually accomplishing something, stopping Han from murdering women. In GYMKATA they just want to send up an SDI satellite. Of course, now it’s 22 years and billions of dollars later and we know that “Star Wars” is a scam – it still can’t tell the difference between a missile and a balloon that got away from a birthday party, even on a clear day, and how’s it gonna shoot down a boxcutter or a suitcase bomb? So in retrospect we can see the cruel irony of The Game. All those lives, all those arrows, for what? To pad some pockets and send up a useless satellite. Unless maybe they use that satellite for cable tv now. Who knows. Maybe they died so we could watch Crank Yankers and shit.

GYMKATA was released on DVD as the result of an annual Warner Brothers promotion where amazon.com allows people to vote for the release of movies from a group of WB catalog titles. I know there were multiple online GYMKATA get out the vote campaigns, but don’t get too excited. It was one of 12 movies they chose, it didn’t exactly win the gold medal. It did beat out a pretty good movie called CARNY, starring Robbie Robertson from The Band.

Knowing the fan response, WB pulled out all the stops for this DVD, including interactive menus, scene selections, the whole works. On the chapter index your selection is signified by a little ninja star, which is nice since there are no ninja stars in the movie but there obviously should’ve been. Other extras include an FBI warning, the original trailer, which has some really funny narration, and a trailer for DUKES OF HAZZARD: THE BEGINNING, with a new Daisy Duke that looks more like Catherine Bach. (“The Duke boys are back – for their first adventure.” Whuh?)

One thing they definitely did right, they used goofy vintage artwork from the original release instead of doing some new photo collage that would hide what the movie actually was. I don’t know why they don’t do that more often – it’s easier for them to do, it looks way better, and it’s more honest. I also appreciate that they included an English subtitle track. Some of the Seagal movies lately they haven’t bothered, and I can’t always tell what everybody is mumbling about.

Anyway, thanks Drunko or whoever it was,

Robert Clouse
This entry was posted on Saturday, February 10th, 2007 at 5:28 pm and is filed under Action, AICN, Reviews. You can follow any responses to this entry through the RSS 2.0 feed. You can skip to the end and leave a response. Pinging is currently not allowed.

One Response to “By Popular Demand! Vern Reviews The GYMKATA DVD!!”