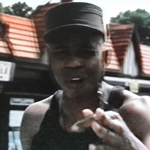 Fresh – who now goes as D. Edward Fresh (I totally made that up) – plays Sam Baker, a kid who has just graduated high school. His mom says he needs a job and his ex-girlfriend says she needs $2,000 or she’s gonna tell his mom he has a baby. Meanwhile, the womanizing, limo-riding assemblyman Dillon (Anthony Chisholm, UP TIGHT, 13, CHI-RAQ) has made a deal to allow the projects to be destroyed and turned into condominiums. Sam is against it and does a little rap about it in the park, which leads to him hanging with a few local activist types and starting a petition against it.

Lisa Nicole Carson (DEVIL IN A BLUE DRESS, EVE’S BAYOU, Ally McBeal), in her movie debut, plays Cheryl, a political consultant who quits working with Dillon because “you don’t listen to the people anymore!” Hoping to unseat Dillon and stop his anti-projects project, she becomes the campaign manager for a famous ex basketball player named Bill McCoy. Judging from his hat and his inspirational neighborhood leadership he’s based on Jim Brown. Sam tries to help with Bill’s campaign, but then one day some guys chase him and he crashes his car into a bulldozer (in the classic “stop steering and put your hands over your face” style) and they plant drugs in his car. So Cheryl convinces Sam he should be the new candidate. Sam at first asks why she doesn’t run, and she says “You know what, I would. I really would. But it’s not my time,” and that he could go after “the youth vote.” 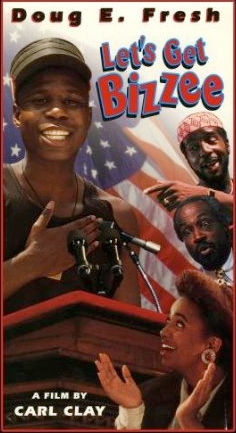 Nothing against Doug E. Fresh, a great entertainer and competent actor in this role, but there is not one single good reason why this kid should be an assemblyman other than that the other guy is an asshole. You’re always supposed to side with Sam, but they make him seem like a loser in the name of narrative convenience. For example it would be a pain in the ass to do more than one scene where he works at a chicken farm, so on his first day on the job he just stops working and goes outside to talk to his friends (who are guilting him for having a job!) and when his boss confronts him about it he says “Yo yo, cool out Mr. Chicken, how you livin? I told you I was coming out to talk to my friends for a minute. Look, it won’t happen again, all right?”

His boss is a fat yelling asshole, so I think you’re supposed to think it’s unfair that he fires Sam, but come on. Apparently Sam also took a two hour lunch break! It’s his first day on the job and already he’s not doing shit. Also he can’t seem to learn that it’s called “Mr. Chicken” not “Mr. Chicken’s.”

And of course it’s a major plot point that he’s a deadbeat dad. SPOILER it turns out to not be his kid, but he still spent the movie thinking it was and only reluctantly barely trying to be responsible because of his ex nagging him.

On the positive side he turns down a job doing lookout for drug dealers. He’s also a good rapper and does a few songs during the movie, including at a concert also featuring The Force M.D.s. Also he has a weird hairstyle where it seems like he has a little graduation cap tassle made out of hair. I don’t know if that’s really what it’s supposed to look like but I don’t have a better explanation.

I guess there are a couple parts that would count as jokes. Maybe the dream he has where dogcatcher type guys with a big net are trying to catch him to make him pay child support. There’s an obese waitress who the mayor or somebody is rude to and then she yells and swears at him and he can’t do anything. For a movie about the little guy this sure seems clueless about power dynamics. The powerful guys just stand around helpless whenever people tell them off.

Also there’s a couple montages of Sam and friends passing out flyers, and one of them they hide inside a junkie’s drugs, another they put inside a toilet. Ha ha, toilets.

There’s kind of a tension between Sam and Cheryl and they end up deciding to get bizzee, which doesn’t seem that weird unless you think about that he’s supposed to be playing a kid who just graduated who she thinks is a drug dealer and she’s an actual adult professional. Anyway there’s a romantic comedy style falling out where he mistakenly thinks she spied on him, so she sends him a video message pleading her innocence and trying to give him some leadership motivation. She even edited in clips of Adam Clayton Powell and Jesse Jackson.

She’s supposed to be a square who’s not used to the young hip hoppers and their lingo so she declares her love by saying “You are the most… ‘def brother’… heh heh… I ever met!”

SPOILER. The idea seems to be that Sam is meant for public office because he’s fresh new blood, he has a youthful outlook, he’s not part of this corrupt old generation, he knows how to energize the youth with his rhymes, he is a charismatic leader, blah blah blah. He’s got to win so they can get this crook out of office and save the projects.

But then at one of Dillon’s speeches a woman stands up and screams that he lied to her and said he could get her husband out of jail if she slept with him. He doesn’t know how to stop her from saying it and everyone finds out it’s true and he gets indicted for corruption.

So really it could’ve been Cheryl’s time. In fact anyone who is actually qualified for the office could’ve run and won instead of Sam. He didn’t need the youth vote, he didn’t do anything to win the election, it just happened independently of anything he did in the movie.

Of course it seems like a well-meaning movie, and it’s an example of that thing I bring up alot about the early ’90s hip hop era, that it was considered cool to know and care about shit, to be political. The movie also uses the phrase “do the right thing” several times, a reminder that this came out at the height of Spike Lee‘s popularity. Unfortunately LET’S GET BIZZEE is an example of how some people tried to follow that principle but they didn’t really know shit about politics so they shoulda stuck to something they knew. Sam barely ever makes any points in his speeches, interviews and debates, let alone good ones. He sounds very passionate but just says vague things about “trying to educate the brothers and sisters’ minds.” He actually publicly compares himself to Malcolm X, Martin Luther King and Nelson Mandela, but it is not earned.

Sometimes he has rhymes though. Luckily his opponent is named “Dillon” so he can use “chillin'” and “illin'” and “villain” alot. But mostly he asks confrontational questions like “So whatchyou sayin?” or “So what’s up?” or “How you livin?” Also he has slogans like “The Rap vs. the Rep.”

There’s a debate, and neither has much to say so it quickly breaks down into a playground argument:

Sam’s big plan is to treat it like a trial and bring up a guy he knows as a witness to testify that Dillon is pulling a scam. But the Dillon camp keeps the witness away by getting him laid.

Afterwards Sam is profoundly disappointed in his friend and tries to shame him.

“You know I wanna ask you one question doe,” he says righteously. “Was it worth it, man?”

Sam is unfazed. “Did you at least wear a rubber, man?”

In the end it works out. Although they never mention doing anything to help their neighborhood hero, the basketball player who I think they say is paralyzed, and who has been set up on false drug charges. Oh well.

Director Carl Clay did not make any other movies that are listed on IMDb, which is not surprising based on the quality of this one, but he’s actually very successful as the executive producer and CEO of the Black Spectrum Theatre, which he founded in 1970. In his bio LET’S GET BIZZEE is not mentioned by name, but it says “His feature length film is on video at blockbusters.” And that I cannot argue with.

Anthony Chisholm Doug E. Fresh hip hop Lisa Nicole Carson Zero External Reviews on IMDb
This entry was posted on Thursday, March 17th, 2016 at 11:41 am and is filed under Drama, Reviews. You can follow any responses to this entry through the RSS 2.0 feed. You can skip to the end and leave a response. Pinging is currently not allowed.

2 Responses to “Let’s Get Bizzee”