I always like Terence Howard but I’ve never seen him in a lead role before. He’s always the supporting role that steals the movie. Here he has a lead role that steals the movie. I haven’t seen GET RICH OR DIE TRYIN but I would be surprised if Terence Howard’s performance in this movie doesn’t run a hundred circles around his co-star in that movie, both as an actor and as a rapper. True, he does mumble alot in this movie (you almost need subtitles) but I still feel his enunciation is better than Fifty Cents. 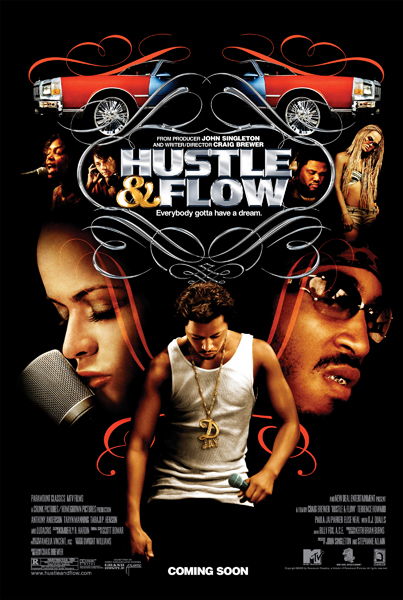 What I am doing here is starting a feud with Fifty Cents. Apparently he told GQ that if he wasn’t a felon he would’ve voted for Bush because “he’s a hustler” and blah blah blah. I think that’s enough to write the motherfucker off forever. If a grown man says that kind of retarded fifteen year old street hustler horse shit that means he is 100% lifetime chump. That pretty much proves what I was saying about how today’s so-called rebels have the same values as the corrupt bastards that they would be rebelling against if they actually were rebels. This guy might as well be fuckin Pat Boone. But he’s not in this movie fortunately so let’s get back on topic.

Anyway, this movie is about a small time pimp and weed dealer in Memphis who starts to question what he’s doing with his life. He says he’s having a mid-life crisis. Then he is inspired to become a rapper. Sounds simple and it is, maybe sounds stupid, but it’s not. It’s an underdog story, an unlikely dude chasing a dream and also becoming just barely a little bit more enlightened (like BAD SANTA maybe, but this isn’t a comedy).

I can’t remember another movie that shows such a detailed look into the process of songwriting and recording. There’s a scene in the movie where he uses the phrase “it’s hard out here for a pimp” in conversation, then he says, “It’s hard out here for a pimp. I like that,” pulls out his notepad and writes it down. Most movies would cut from there to a completed song called “It’s Hard Out Here For a Pimp.” For this movie it’s only the beginning. You see him putting the song together with the producer (Anthony Anderson) and the programmer (DJ Qualls), making one of his hoes his backup singer, showing her how to sing the chorus, etc. Making a song piece by piece. There’s even a part where he’s rapping and the producer cuts him off because the microphones are too shitty and they have to go buy a new one that won’t distort.

You’re definitely rooting for this guy but they don’t completely whitewash the fact that he’s a pimp. At one point, after he already seems to be changing, he throws a ho with a little baby out on the street. One of his other hoes, the likable and childlike Nola, he forces to have sex with a shop owner to get his fancy microphone. And it’s not played for laughs. Okay, so he’s not whipping bitches with coathangers and telling them to walk between the rain drops. (Iceberg Slim reference.) If they’re able to make his relationship with Shug (Taraji P. Henson, who’s fucking great) seem sweet – and they do – it’s obviously not a 100% realistic portrayal of a pimp. But at least they don’t make pimps seem funny or glamorous. There’s no cheetah skin or giant hats in this movie.

I don’t know if you remember Anthony Anderson, he’s the goofy fat guy in the ROMEO MUST DIE/EXIT WOUNDS/CRADLE 2 THE GRAVE trilogy. He was also in BARBER SHOP and some worse movies. There’s something about him, I don’t know. He can be obnoxious and unfunny but he has some kind of charisma. Here he’s playing a serious role and he does a real good job. It’s almost too bad because his next movie is Scorsese’s remake of INFERNAL AFFAIRS. It would’ve been funny to see him jump from MY BABY’S DADDY into Scorsese. Anyway, he does a good job. Also some white kid named DJ Qualls who, ironically, is not a DJ but a keyboard player. Come to think of it, Terence Howard’s character is named DJay but is not a DJ, he’s a rapper. There isn’t even a DJ in this movie at all. What the fuck is going on here man, I’m confused.

If I heard DJay’s songs out of context I wouldn’t give a shit, but watching the movie makes you love “WHOOP THAT TRICK” and “IT’S HARD OUT HERE FOR A PIMP.” They make you cheer and chant along. You can understand how they make a pregnant ho pump her fist. Both of these songs should be THE VERY DEFINITION of a “Best Original Song” Oscar. No fuckin way there’s another song in any movie this year, including musicals, that is as crucial and as perfect for the movie. The ONLY thing that is arguable is whether WHOOP THAT TRICK or HARD OUT HERE FOR A PIMP is more deserving. The first one is the thrilling first song that he writes and the one that’s more important in the end. But the second one has better lyrics and the catchy chorus that stays in your head for two weeks after the movie. I even saw some interviewer lady on the red carpet at the Golden Globes singing it. But of course it wasn’t even nominated for the Golden Globes, that award went to a song from THE END CREDITS of BROKEBACK MOUNTAIN. In other words, the song that is only heard by the kids that have to clean up all the shit you left on the floor in the theater after you left. From what I’ve seen, the less important song “Hustle & Flow” is the one that is a favorite for an Oscar nomination, which means one thing: fuck those motherfuckers. They chose that song because they didn’t want to admit that the SCIENTIFICALLY UNDENIABLE BEST SONG OF THE YEAR was called “It’s Hard Out Here For a Pimp.” Easier to just pick something out of a hat.

This is a great movie. Simple, not obvious, original, great acting all around, perfect non-showoffy direction, makes you feel good, etc. I will keep an eye on this writer/director Craig Brewer who seems to know what he’s doing so far.

Anthony Anderson Craig Brewer DJ Qualls Elise Neal hip hop Isaac Hayes pimps Screen Actor's Guild Award Winner Chris "Ludacris" Bridges Taraji P. Henson Terence Howard
This entry was posted on Monday, January 23rd, 2006 at 3:33 am and is filed under Crime, Drama, Reviews. You can follow any responses to this entry through the RSS 2.0 feed. You can skip to the end and leave a response. Pinging is currently not allowed.