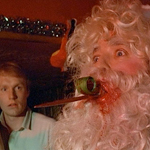 This was made at the same time as SILENT NIGHT, DEADLY NIGHT (they both came out in winter of 1984), but it’s the reverse of a killer Santa movie. This is about a guy who goes around killing Santas! He’s unseen, face off camera, like a killer in a giallo. But in the American slasher tradition he’s a puritanical executioner. The Santas he kills are all doing something he apparently disapproves of: having sex, being drunk, going to see a stripper, throwing an awesome disco costume party, etc.

The British are very polite, so nobody ever accuses the victims of asking for it by the way they’re dressed (in a Santa costume). They don’t tell them not to walk around the city drunk and alone and dressed as Santa Claus walking past newspapers with giant sensational headlines about the ongoing murders of people dressed as Santa. Good for them.

Most of the people who get attacked we don’t really get to know. Like, we just see a Santa in an alley smoking and apparently trying to sell chestnuts, and then he gets his face roasted. I don’t know how this Santa-killer knows where bad Santa behavior is gonna take place. How does he just happen to be there to witness a guy ogle a sexy lady when he’s about to come on shift as a mall Santa? He must do some very thorough pre-research and patrolling and also have incredible luck.

Man, imagine what this dick would do if he came across one of those Santa pubcrawls! Or Billy Bob Thornton! 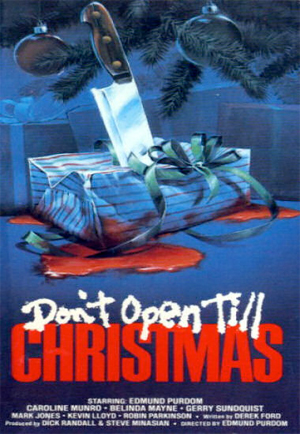 Anyway, the story centers around the aftermath of a particular Santa murder, that of a well-liked rich guy who gets a spear thrown into the back of his head while he’s making a speech as Santa at his party. Actually, just as he’s blowing on a party horn. His adult daughter is there and happens to look away just when it happens. Then she looks back and there’s a blade sticking out of her dad’s mouth.

So it follows her and her boyfriend, who comes under suspicion by the inspector inspecting the case (Edmund Purdom, PIECES, ATOR THE FIGHTING EAGLE) and also by her when he gets an F- in supportive boyfriending by

If I may be so bold as to SPOIL who the killer is in this paragraph, it’s kind of interesting how they handle the whodunit. This wild-eyed weirdo named Giles (Alan Lake) starts calling the police from a pay phone, saying weird shit, claiming to be a reporter, and showing up and making other people uncomfortable. He’s such a walking sore thumb from the beginning that I assumed, of course, that he was a red herring. Nope, he’s the killer, just like you assumed you were supposed to assume and therefore assumed it wasn’t him. A red red herring. A green herring?

Other than singling out Santas, this killer doesn’t seem to have a consistent M.O. In one scene he wears a clear plastic mask, in others he doesn’t. He uses different weapons. One victim is actually not a Santa, she’s a stripper who saw him kill a Santa, and instead of stabbing her like the others he kidnaps her and chains her up in his basement. So he’s unpredictable.

Also, for exactly one victim he delivers a wrapped Christmas present (labelled, of course, with the title of the movie). This is a pretty funny suspense gimmick because of course we assume there has to be some body part inside there, but we know it’s gonna sit there unopened until the end of the movie. (SPOILER: It’s actually not a body part, it’s a Santa Claus music box rigged to explode. Fun ending.)

To me it mostly looks and feels like a competent film. In fact, it’s a little dry, it could use some more stupidity. One goofy moment I enjoyed is when the abductee promises that if he unchains her she won’t try to escape, and it cuts to a closeup of her crossing her fingers. Come on lady, that rule does not apply to emergency situations. Don’t feel bad about lying to this creepo.

By the way, add this to our list of movies where the killer got screwed up because of a childhood sex-witnessing incident. In this case he caught his dad in a Santa outfit fucking some lady. To be fair it’s probly more relevant that then his mom came in and his dad hit her and she fell down the stairs so then he stabbed his dad with the Swiss Army knife he just got for Christmas. (When he excitedly opened the gift I actually thought he was just gonna do his first stabbing right then and there. That would be a funny flashback I think.)

I noticed on the credits that some guys (who came from the porn world, apparently) were listed for “additional scenes written and directed by” before it got to star Edmund Purdom’s director credit. Turns out the production was a total disaster. Purdom, who had starred in PIECES for the same producers, said he’d only take the role if he could direct. But then apparently it went so badly that they replaced him with another director, and then they replaced that director too. Mondo Macabro’s text-based extras credit this with giving the movie a crazy cut up feeling, but I don’t know, it didn’t seem that weird to me. There are individual directors of low budget slashers who come up with even less consistent visions than this rotating gallery did. It’s not that bad, or that good.

On second thought, the sexy dance number by Caroline Munro (playing herself it says?) did seem a little long and out of nowhere.

I do have to give it credit for Christmas imagery, though. To me it’s important for a holiday themed horror movie to get a good feeling for the sights and sounds of the time of year when it takes place. Of course, THE SHINING and BLACK CHRISTMAS are probly the best Christmas-set horror movies, and both of them are light on the dancing sugar plum fairies and shit. They can get away with it because they’re great movies, but these also-rans got no room for excuses. Therefore, I must acknowledge DON’T OPEN TILL CHRISTMAS for including not just Santa costumes and post-dated gifts, but a police holiday band performance, trees and decorations, seemingly authentic holiday shoppers and mall Santas. I believe at least some of this was actually filmed at Christmas time, because they show a sign pointing to “Father Christmas and Paddington,” which is not the sign you would make if you were faking it.

Paddington, huh? That might sound like a British thing, to connect Paddington Bear to Christmas, but actually I vaguely remember that being a thing at some department store here in the ’80s or so. A guy in a bear costume? I can’t remember. But luckily this pervert killer leaves the bear out of it. He says “I hate Christmas and everything it stands for!” but maybe he doesn’t consider Paddington an integral enough part of the holiday to try to catch him with a hooker or whatever. Or maybe the bear just keeps his nose clean and that’s why we don’t see his throat dripping human marmalade.

One final Christmas touch I enjoyed: the end credits are scored with a synth version of “Silent Night” that sounds half Christmas carol and half creepy John Carpenter dirge.

Thanks guys, ho ho ho. Dress how you want this Christmas but don’t get stabbed or kidnapped.

Christmas Christmas horror Edmund Purdom Paddington Bear Santa Claus slashers
This entry was posted on Wednesday, December 24th, 2014 at 9:18 am and is filed under Horror, Reviews. You can follow any responses to this entry through the RSS 2.0 feed. You can skip to the end and leave a response. Pinging is currently not allowed.

9 Responses to “Don’t Open Till Christmas”