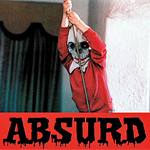 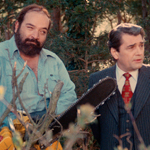 This was made at the same time as SILENT NIGHT, DEADLY NIGHT (they both came out in winter of 1984), but it’s the reverse of a killer Santa movie. This is about a guy who goes around killing Santas! He’s unseen, face off camera, like a killer in a giallo. But in the American slasher tradition he’s a puritanical executioner. The Santas he kills are all doing something he apparently disapproves of: having sex, being drunk, going to see a stripper, throwing an awesome disco costume party, etc. END_OF_DOCUMENT_TOKEN_TO_BE_REPLACED