THE MEATEATER (1979) is a pretty good really bad one I found. I looked up the director, writer and lead actors and none of them have any other credits except the leading man Peter Spitzer had a small part in a Cannon movie the same year called GAS PUMP GIRLS. I can’t vouch for that one, but THE MEATEATER has a certain charm to it because you can tell they’re trying hard but the amateurish acting, dialogue and pacing make it feel more like an Ed Wood movie than like other low budget horror of the era.

The story is about a Florida traveling shoe salesman named Mitford Webster (Spitzer) who comes home one day, makes his wife come out on the porch (maybe they weren’t allowed to film inside?) and complains about being unfulfilled. Then he checks the mail and oh what a surprise, he bought a movie theater in some town somewhere.

So he uproots his family and they go fix up this trashed theater called The Crest. It’s kind of a cool fantasy because as a movie buff you gotta think that would be fun to restore an old theater. Every man needs to find a place to hang his Japanese ABOVE THE LAW poster. Running a theater is Mitford’s dream, but he’s not really into movies specifically. I think he just likes the idea of a small family business where neighbors of all ages come together to have fun. And maybe that’s what they were doing making this movie, because they don’t seem to have a particular vision. They don’t have malt shops anymore so Mitford gets a theater and Derek Savage directs THE MEATEATER. 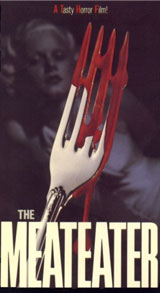 The only problem is there’s a weird, almost feral old man (some actor named Arch Joboulian), a former projectionist who secretly lives on the roof (?). He murders two super-nerds: a projectionist in a Conan the Barbarian comic book t-shirt and an up-to-no-good moviegoer who looks like Napoleon Dynamite. These incidents threaten the viability of the Crest Theater as a business. And nobody thinks to just hire a security guard like they did after somebody got shot in the parking lot after watching BOYZ N THE HOOD.

It’s called THE MEATEATER because… well, I guess because he eats a rat at the very beginning. There’s a whole carnivore theme that runs through the narration of GRIZZLY SAFARI, the wife’s pride in serving the best hot dogs, and an awkward breakfast dicussion of Jimmy Dean brand sausages. But it’s not about cannibalism. The weird old man is called “The Meateater” in the credits, but he should be called “Jean Harlow Fan.” That’s his thing, he’s in love with Jean Harlow, he watches some old (public domain, I figure) footage of her when the theater’s closed, and he eventually kidnaps the daughter because he mistakes her for Harlow. You know, these sorts of things happen.

He’s a funny bad guy because he’s just not very threatening. I’m not really clear how he killed those two sissies (the projectionist one involved electrocution) but I never bought that this girl couldn’t take him. He’s a wobbly old man – just push him over! The only reason he can keep up with these women is because they have those old timey flights of feminine hysteria where their fear makes them stumble and almost faint.

Considering how homespun the whole thing is the makeup on the Meateater is surprisingly good, and his weirdo performance is better than the rest of the, uh, acting. I would also like to point out that they show a very professional looking painted poster for GRIZZLY SAFARI, though I’m assuming it’s not a real movie. Good job on that, set decorator.

This is a terrible movie that wouldn’t scare anyone, but its oddness makes it pretty enjoyable. Mitford is just not like a normal movie protagonist at all. He’s older, not very tough or cool, occasionally whiny, sometimes weirdly frisky with the wife (slapping her on the butt but also holding a dead rat in her face). He says strange things – he refers to bird shit he has to clean out of the projection booth as “pigeon B.M.” Some of the characters have goofy names: the real estate agent is Knuckle, the cop is Lieutenant Wombat.

I do think there’s supposed to be some sort of commentary here about people who blame violence on violent movies. That’s the joke of a guy obsessed with old movies committing murders during a G-rated wildlife documentary. The irony is lost on Lieutenant Wombat, who can’t tell the difference between Gerard Damiano and Mike Nichols. You get it, man? The makers of THE MEATEATER have unmasked the hypocrisy. But the long tangents of pointless dialogue and oddly deadpan delivery of everything makes it hard to spot.

The end is crazy too. It’s kind of a Universal Monsters type climax where two men are struggling on a roof and one plummets to his death. Also there’s a whole thing where it was probly supposed to be the lookalike brother who died and you’re supposed to think it’s the Meateater and only after many years of dissection and BLADE RUNNER style analysis would you discover the truth.

Anyway, the beauty of it is the death – this guy only falls off a one story theater but he splatters like he has no bones and just a bunch of jello under a thin wax coating. I mean, it’s not blood, it’s his flesh turned into goop. That guy must be so old he was rotting. So it was the right thing to do, to throw him out like bad eggs. Also, the daughter – for reasons that are not clear – can’t control herself from falling hands first into the goo.

Then, even though the murders seem to be solved, Mitford believes he has no choice but to sell the theater and move back to Florida and sell shoes again. It’s fucked up. I guess you could read it as a little adventure he has to have in order to appreciate his life and his family. But it’s easy to see as a warning that your dreams are unattainable. You should be content with your shitty job and unhappy life because if you try to do something you’ll fail and people will die. A weird old pervert’s sick obsessions will trump your goals. So shut up and help me try on these penny loafers.

And come to think of it this might ring true to the filmatists, who probly poured their passion, energy and savings into this thing, and I’m sure hoped it would turn out better than it did. After all their work it comes out under a title that makes no sense, and nobody gets a career out of it, and hardly anybody sees it except people like me sitting here making fun of it for a bunch of people who will never watch it.

But you know what? Even if they did go back to selling shoes I bet it’s a laugh to dig this tape out every once in a while. I bet watching it brings back good memories as the bad ones fade away. I bet they had fun and that nobody died. So I say do buy the theater, and stick with it. Give it a shot. Follow your dreams. Don’t give up like Mitford did. To put it another way: go find your Jean Harlow, snatch her up, and don’t let her go. An don’t fall off a roof.

Slasher Search
This entry was posted on Saturday, October 24th, 2009 at 11:29 pm and is filed under Horror, Reviews. You can follow any responses to this entry through the RSS 2.0 feed. You can leave a response, or trackback from your own site.

15 Responses to “The Meateater”