HOUSE OF DEATH
aka DEATH SCREAMS, apparently
but not to be confused with HOUSE OF THE DEAD, DEATH HOUSE or BLOODBATH IN THE HOUSE OF DEATH

This one’s from ’82, another quick cash-in on FRIDAY THE 13TH, but I guess it’s more passable than that last one FINAL EXAM. I guess. The problem this time is not that stuff doesn’t happen, it’s that it’s hard to understand what the stuff is.

Take for example the opening scene. A young couple are fucking in the dark somewhere. The girl wants him to say he loves her. The guy is trying not to cum yet. A train is approaching. He says if he can hold on for just a little bit it’ll be the night of her life. As the train goes by they seem to be orgasming, but then you see blood dripping from his mouth and it looks like a rope is tied around both of their necks. Then there’s a shot of somebody (them?) on a motorcycle falling slow motion out of a cave (?) into water, and the credits begin.

After finishing the movie I realized they were murdered, but at the time I thought it was some weird suicide pact or something. Like maybe he set it up so the train would catch a rope that would strangle them – I don’t know. What did the train have to do with it? Were they fucking on a motorcycle? What kind of weird sex game were they supposed to do with the train and the motorcycle? Am I just naive or something? I don’t get it. 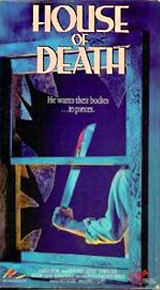 The credits have a really bombastic orchestral theme that got me ready for a pretty dramatic horror movie, so it’s funny when the credits end and it cuts to the corniest happy keyboard music you can imagine over ugly shots of kids riding bikes and people mowing lawns in the suburbs. Actually, the music is a constant source of entertainment throughout the movie. They credit Dee Barton, a guy who did some Clint Eastwood movies, as the composer. But it sure sounds like library music because there are at least half a dozen drastically different styles. Sometimes you got this orchestra, sometimes just one keyboard, sometimes upbeat country music, sometimes crazy electric jazz.

It’s filmed in North Carolina (in fact, Earl Owensby Studios, same place FINAL EXAM was shot). It seems like one of those regional “let’s put on a show!” independent horror movies where somebody called in everybody in town and said they could make money off this thing, but nobody knew what the fuck they were doing. It’s about a bunch of high school kids in this small town working at a carnival and then going out to drink beer in a cemetery. The kids from the train/motorcycle/sex/strangling incident have gone missing, but everybody just figures they ran off together. I couldn’t keep any of the characters straight, but there are a bunch of them, and most of the guys try to be funny by talking in funny voices or imitating John Wayne or something like that. I guess one of them is kind of nerdy (he dies while taking a shit), one is supposed to be a ho, one is the coach who they convince to hang out with them. There are some very awkward scenes of character development, like when a girl has a long talk with her grandma about her deceased mother and how she learned to love.

Also there’s a [mentally challenged] guy named Casey who plays with toy trains. He doesn’t have a toy motorcycle as far as I could tell.

Meanwhile an unseen killer is murdering various people with a machete, mostly off screen. So many slasher movies have a masked killer because they’re imitating Jason and Michael Myers, but there’s also these ones that follow the pre-Jason FRIDAY THE 13TH formula (taken from giallos) of mostly showing the killer’s hands and then at the end you find out who it is.

It’s pretty incredible what this killer can accomplish in short periods of time. The camera goes somewhere else for less than a minute, all the sudden a guy is dead and hanging upside down, or has the head entirely chopped off. You know, you got your standard oh-thank-god-you’re-okay-wait-a-minute-why-aren’t-you-responding-to-me-oh-my-god-your-head-just-fell-off moment. This guy cuts off several heads, some hands, cuts a girl in half. I know you’re supposed to think it’s the retarded guy, but I call bullshit on that. It’s gotta be a master chef or butcher or something. This guy is highly skilled.

And he covers his tracks well enough that nobody even knows a murder spree is going on until near the end of the movie. He just leaves the bodies around but I guess he just knows nobody will find them. In one scene the girl who’s supposed to be a ho is swimming naked in the river, suddenly she bumps into the dead bodies that have been floating since much earlier in the movie.

At the end it reveals who the killer is, and there are some little flashes of flashbacks that I think are supposed to explain what caused him to do it. Something about prostitution, the ol’ “I do it because mom was a hooker” excuse. I figured I wasn’t paying enough attention to piece it together, but I checked the IMDb message boards and they’re full of people trying to figure out what the hell happened. One guy claims he watched it three times trying to understand and still doesn’t know. He brings up a whole backstory about the sheriff’s son and the retarded guy and a car accident but he can’t connect it to the guy doing the killing.

The ending is good though. Not sure if anything I like about it was intentional, but maybe. The killer comes after one of the girls, but she’s holding a shard of glass that she uses to slit his throat. Exactly then, the fatass sheriff walks up. He’s been hassling kids since the beginning of the movie but as far as we know is not even aware that there’s a killer on the loose, he’s just trying to find the retarded man who snuck out of his house. Or maybe he knows more than he’s letting on, because he sees the guy dying and immediately shoots him 5 or 6 times.

So there’s an ambulance and cops there now, it’s a crime scene with lights flashing and radios buzzing. The sheriff is taking the survivor girl to his car.

“Why?” she cries, needing some kind of explanation, some way of comprehending what has just taken place.

Cut to credits over naked dead body floating in water.

As a viewer you are asking the movie what just happened here, but I don’t think it means to tell you “I don’t know. Let’s git you home.” I think they just didn’t communicate the story well enough. The back of the video actually gives an explanation: “A deranged killer, excluded from the festivities as a child, has found a better way… in an abandoned house, with a razor sharp machete, slicing childhood ‘friends’ to ribbons. The blade is being sharpened again, as a group of college students plan a party. In that same little town, in that same abandoned house. Join them if you dare!”

I’m not totally convinced that’s what’s happening, but I’m glad the copy writers had a theory.

By the way, it’s not like the movie is mostly house-based. They just happen to be inside a house when the climax happens. But where else would they be? A house is not that uncommon of a place for a killing, in my opinion. I’m not sure why they consider it notable enough to use for the title. And anyway, most of the murders aren’t even in the house. It could be TRAIN TRACKS OF DEATH or OUTHOUSE OF DEATH or WOODS OF DEATH, WATER OF DEATH. Lots of possibilities.

I figured this would be a director with no other credits to his name, but get this, David Nelson is the son of Ozzie and Harriet! He’s also the uncle of that band “Nelson.” And his stepdaughter was once married to Chuck Woolery. It’s all on the internet. Says he has a star on the Hollywood Walk of Fame too. And he directed HOUSE OF DEATH. Ain’t that a bitch?

Slasher Search slashers
This entry was posted on Saturday, October 10th, 2009 at 10:41 pm and is filed under Horror, Reviews. You can follow any responses to this entry through the RSS 2.0 feed. You can skip to the end and leave a response. Pinging is currently not allowed.

8 Responses to “House of Death”