SILENT MADNESS is another song in the key of HALLOWEEN, with little melodies from a few other slasher favorites. A psychotic mute inmate from a mental asylum gets out and returns to the scene of a 20 year old massacre. Like A NIGHTMARE ON ELM STREET there’s a boiler room involved, like BLACK CHRISTMAS he kills some sorority sisters still on campus when most students are on vacation, like HOUSE ON SORORITY ROW there’s a cranky old sorority mother, like SLUMBER PARTY MASSACRE the killer (played by stunt coordinator Solly Marx) is a regular looking dude with no mask or anything, and there’s a twist ending that’s kind of a nod to FRIDAY THE 13TH’s nod to PSYCHO. But it’s nowhere near as good as any of those movies. I don’t want to call it Z-grade, but it’s pretty low on the alphabet. Maybe W-grade? 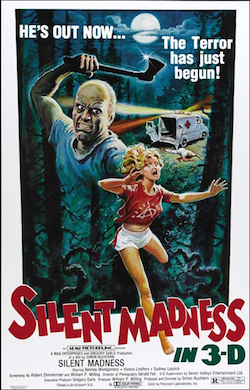 I noticed from the end credits that this was shot in 3D. I didn’t pick up on that from the movie itself, but it does somewhat explain one weird part where the killer throws an ax toward the camera and it turns into fake-looking animation. I’m surprised they made the effort to shoot it that way, because the photography doesn’t give the impression of effort, or at least skill. It’s on the level of the more home-made-but-at-least-shot-on-film slashers like THE NIGHT BRINGS CHARLIE, very low on style or atmosphere. Those are two things that are more important in horror than in most other genres, especially one like this that has obvious lifts – or let’s say coincidental parallels to – movies we’ve all seen that do have those qualities.

I can’t say it’s entirely unoriginal, because a bunch of the details are effortlessly weird, and that’s what makes it arguably semi-worthwhile. For one thing, the rampaging patient didn’t escape the hospital – he was released due to a clerical error, because his name is Howard Johns and they meant to release John Howard. And actually they probly shouldn’t have even released the other guy, because they’re in the middle of releasing a bunch of dangerous patients due to budget cuts. You figure that might’ve been caused by Reaganomics, but apparently it’s just the whim of the evil head of the hospital, who rather than trying to help the police locate his missing patient forges a death certificate and claims he’s not loose, he’s just cremated.

The protagonist, Dr. Joan Gilmore (Belinda Montgomery – Doogie Howser’s mom) is the whistleblower who figures out what happened, but she’s a really shitty whistleblower. When she finds out a dangerous psychotic is on the loose she doesn’t go to any type of authorities, she waits until the next day to tell her boss (the evil guy), who calls a meeting to discuss it. Later she sneaks around and finds out the other doctors are doing weird experiments on some of the patients, but nothing much comes of that.

To Joan’s credit, when it becomes clear after a couple days that nobody is gonna fuckin do anything she does go out on her own (on her weekend) and try to find Howard herself. She goes to the sheriff at the college where the massacre took place. He’s played by Sydney Lassick from ONE FLEW OVER THE CUCKOO’S NEST, a fat, lazy, bald and effeminate sheriff. I bet when somebody wrote the line “Just because the god damn broad is so good lookin’ doesn’t mean we all have to think with our dicks!” they didn’t realize it would be delivered in sort of a Rip Taylor type of voice. To the sheriff this shit is personal because he still has the scar to prove he got his throat slit by this guy, who he refers to as “that screwball, Howard Johns.” Then he proceeds to not believe anything Joan says and stay in his office.

He won’t let Joan read the files but tells her to go talk to the newspaper, which I think is maybe more of a newsletter judging by the small office with one reporter/editor and one secretary/layout gal. Joan tries to go undercover as a magazine reporter but the newspaper guy knows she’s lying, is charmed by her and they almost immediately become snugly boyfriend and girlfriend.

Despite that failed operation he sends her on another one, going undercover as an alumni to the sorority to find out more about the murders, even though he personally reported on them at the time. She gets in by wearing a ring belonging to the secretary, who actually is an alumni so maybe she should’ve done it. I guess it didn’t occur to them.

But they let Joan stay at the sorority house, and the teenage girls hang out with her as if it’s not weird. You know how 18 year olds in sororities love to have sleepovers with 35 year old doctors from out of town that they just met. Other hobbies include dancing around, pulling up their shirts to show their bras, and talking about the murders. Joan sees Howard Johns in the boiler room but nobody believes her. Her and her new boyfriend want to protect the girls, but decide not to tell them about the escaped lunatic because they don’t want to scare them. Then when the power and phone lines are cut they agree that it’s “most likely a prank.”

If the girls had been warned maybe they would’ve seen him coming. In one of the better scenes Howard is able to sneak up and kill two in one room, one of them playing their Dragon’s Lair arcade game, the other hanging upside down on one of those aerobics hanging-upside-down things. Distracted by the the Twitters and iPhones of the day.

Meanwhile, the assholes at the hospital know they have a problem on their hands because of the short-sightedness of their “we’ll just lie and say that he’s dead and we cremated him” plan. It’s about as good as the one when I was a kid and I didn’t want to finish eating some kind of casserole thing my dad made so when he was out of the room I scooped it onto the table and put my plate on top of it. It achieved my goal in the short term but it eventually led to more problems. My ass would’ve appreciated it if I’d worked that out in advance.

So they send two orderlies to catch or kill Howard, but at least one of them is more interested in catching Joan and raping her. He has two different parts where he talks lustily about how much he’s gonna enjoy giving her a shot. When he finds her he yells that he’s gonna inject her “right up yer ass!” and turn her into a “piece of meat. Our meat!”

By coincidence Howard attacks her at the same time as these guys so it turns into a whoever wins we lose type situation, one bad guy pitted against the other. Howard ends up knocking Joan unconscious and tying her up. The disorderly later finds her that way, he oughta come to his senses and go after the murderer but instead he takes it as a lucky break, like finding a wad of cash on the ground. So he says “I got another report to put in your file.” You get it? His “report” in her “file.” He always wanted to say something clever like that before raping one of his co-workers that he found unconscious after being kidnapped by a serial killer.

Since this was filmed in New Jersey it has Paul DeAngelo, the musclebound counselor from SLEEPAWAY CAMP, as a dude camping with his girlfriend. He, his girl and his A-Team-esque van have no chance against Howard Johns and his sledge hammer.

The reason this is grade-W and not grade-Z is because there are maybe two ideas in it that seem intentionally good. One has to do with the way SPOILER flipping a breaker causes a giant drill to turn on and penetrate the orderly-rapist’s head. The other has to do with the SPOILER twist ending. When we first see the flashback to the massacre it makes no sense that the cruel prank that made him snap was a bunch of girls showing him their tits. But then at the end we find out that the flashback wasn’t entirely accurate, it was the mom that killed those girls with a nail gun. It was her that was upset about the tits, not him. That makes more sense.

You know what, I just got it – Silent Madness because he’s mute. But Leatherface, Michael and Jason don’t talk either so that really doesn’t seem like the central gimmick here. Is there a central gimmick here? Maybe that’s the problem. Maybe I had to see it in 3D to really understand it.

Paul DeAngelo Simon Nuchtern Slasher Search slashers Sydney Lassick
This entry was posted on Friday, October 28th, 2011 at 4:47 pm and is filed under Horror, Reviews. You can follow any responses to this entry through the RSS 2.0 feed. You can skip to the end and leave a response. Pinging is currently not allowed.