Somebody was making fun of me the other day for always saying the full name “Stone Cold Steve Austin,” even though he’s just credited as “Steve Austin” these days. But you know what man, it’s like saying “Sir Laurence Olivier” or “President Barack Obama” or “Screen Actor’s Guild Award Winner Chris ‘Ludacris’ Bridges.” I am a gentleman and I show respect when appropriate. And anyway he’s not the Six Million Dollar Man, and he’s not an amazing undercover biker movie starring Brian Bosworth, he’s obviously a combination of the two. Just calling him “Steve Austin” or “Stone Cold” would be incomplete and inaccurate. You can’t just say “butter” when you mean “peanut butter,” it’s a completely different meaning.

For this review, though, I’m willing to drop the “Stone Cold,” ’cause KNOCKOUT is not really worthy of the proud Stone Cold Steve Austin name. In an understandable bid to stretch out a little, Mr. Austin plays a high school janitor who trains a picked on nerdy kid (Daniel Magder) how to box. It’s not an action movie at all, it’s one of these shitty inspirational family movies, and not even produced under the prestigious WWE Films banner (even though this is the type of movie they do now; they did one where John Cena was an inspirational school wrestling coach).

KNOCKOUT takes place in Tacoma, Washington, which is the first stadium city to the south of Seattle. Just like all the Seattle movies though it’s just a couple establishing shots and the rest is filmed in Canada, a fact betrayed by the actors saying “aboot” “aboat” and shit. Still, it would be cool if the movie was called THE TACOMAN, since that is the real word for someone who lives in Tacoma (it’s pronounced tuh-coh-min, but always looks like Taco-Man when you read it).

Let me make it very clear that you shouldn’t watch this movie. It’s a shitty kids movie with bad-Canadian-TV quality photography, acting and writing. It’s just a half-assed paraphrasing of THE KARATE KID but with a kid that makes me feel bad for complaining that Ralph Macchio was too whiny and too much of a weiner.

Have you guys ever noticed that in movies and TV the new kid always comes in late? The class has already started and he comes in and the teacher introduces him to the class and usually one kid makes fun of him and the teacher snaps at him to be quiet and be nice to the new kid. In my opinion the new kid deserves the derision though because what the fuck, your plane just landed? I don’t think so, I think you’ve been moved in for a couple days, you got a night’s sleep like everybody else. Maybe you still got boxes to unpack, but you coulda fuckin showed up to school on time like a responsible person. 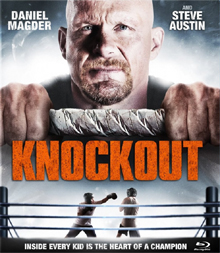 Anyway this kid moves to Tacoma, he hates it, he makes a new friend, a bully kid picks on him, etc. He’s interested in boxing because his grandpa was a pro, but his mom doesn’t want him to do it because 1) he had leukemia when he was a baby and 2) he would definitely start crying and run in circles flailing his arms around if a fist was headed in his direction.

But he gets it in his head he wants to try out for the boxing team, where of course it turns out the bully that picked on him is the star fighter and the guy he has to spar with to get on the team. This leads to trouble and the kid getting banned from the gym, but it’s okay because from the looks of it this is the very first time he’s tried to do any type of fighting. Getting kicked out is the best outcome possible, makes him look like a troublemaker and he didn’t have to die.

Mr. Austin is the school janitor who runs into the kid a couple times and is nice to him, shames him into not pussying out of the team try-outs, then agrees to give him some pointers after school, etc. His name is Dan, but I kept thinking the kid was calling him “dad.” Of course Dan ends up representing the kid in a big match against the bully. Mr. Austin gets to play the nice version of his hosting duties on the “WWE Tough Enough” reality competition show. He gets to be inspirational and everything but not mean like on that show. Which is too bad, it would be funny to see that kid wet his pants.

If there’s one good reason for this movie to exist it’s as proof that Austin is a movie star. Even surrounded by this bullshit movie he has a strong presence and seems to give the role 100%. You can absolutely believe that he would be a big inspiration to a kid. Of course Austin doesn’t have a huge range (other than being able to play evil or good) but in the type of roles he can play he’s an absolute natural, which is even more clear when surrounded by not-so-hot actors like in this one. He definitely elevates the movie from crap to crap-I-was-able-to-get-through.

Unfortunately this is one of those movies where the kid is so annoying you can almost understand where the one-dimensional bully is coming from. I feel bad saying this about a young actor, it’s not really his fault, but the kid is terrible and I can’t believe the director didn’t try to make him do better than this. He has no inner life, he over-projects every emotion he’s supposed to have, and comes off as the most awkward and annoying kid possible. When he’s excited to see the boxing team for the first time he has a huge shit-eating grin on his face, when he’s nervous about getting in the ring he cowers and looks terrified like a cartoon character. He’s constantly whining or raising his voice when he disagrees, he just seems like way too much of a tantrum-throwing baby for a kid in high school who’s trying to become a man.

It’s partly a complete absence of subtlety in the acting, but also the way this stupid character is written. When Dan agrees to coach him the kid immediately jumps up and down yelling “YES!” When a girl kisses him he does the same thing except he yells “Yo Adrian, we did it!”

I guess you could justify him saying dumb shit like that because he’s socially awkward, he doesn’t know how to not be like that. He wears a suit to school until he begs his step-dad to approve a couple “cool” t-shirts. He calls Tacoma “Nowheresville.” And after he can’t get on the boxing team he whines, “Well, Hector and his goons have alot to laugh about now. I just wish I could go back to my old school.”

But everybody else in the movie talks like a dork too. His friend keeps calling him “Poindexter,” and calls a mean cheerleader girl “bird brain.” One of the bully’s verbal takedowns is “You don’t belong at this school. You belong at a school for nerds.”

Despite Dan teaching the kid how to work hard and believe in himself I’m pretty sure the filmatists didn’t feel it was necessary to work hard on this movie. There’s actually an interview with one of the writers, Evan Jacobs, who says “It’s a kid movie. He is nervous about going to this new school. He is getting picked on. Stone Cold comes in, and it’s just like THE KARATE KID. Mr. Miyagi comes out, starts helping him a little bit. One thing leads to another. He starts training him.”

He also says in his original script the kid was autistic, but the producers worried that people wouldn’t want to see an autistic kid getting pummeled. So they changed it from debilitating autism to mild douchery.

Later in the interview Evans admits, “I will be honest, my movie is basically THE KARATE KID. There are some changes. It takes place in a school. It’s boxing.”

It’s too bad there aren’t more changes. There are other perfectly good movies to rip off. They could put in some breakdancing or ghosts like in NO RETREAT, NO SURRENDER. They could have a robot like in whichever ROCKY movie that was. They could put the kid in prison like in UNDISPUTED. At the end he could break his neck on a stool and get paralyzed and ask Steve Austin to unplug his life support.

That’s not how it ends, but in order to ensure that you don’t rent the fuckin thing I will tell you how it does end. Even more than in THE KARATE KID it really doesn’t seem like the kid has learned any skills at all. In fact there’s a montage of him running before the big fight and he even looks terrible shadowboxing, like a clumsy little boy pretend fighting in the backyard after watching cartoons. He’s getting a well deserved ass-kicking in the ring, but Dan and grandpa encourage him and he “has heart” so he makes it to the end of the three rounds, and immediately starts celebrating… not because he’s like Rocky and just wanted to prove to himself that he could go the distance, but because he apparently doesn’t understand the rules and thinks he won. When it’s announced that the bully won the decision our kid immediately starts whining (right there in the ring, in front of hundreds of people) that he didn’t get on the team.

But the boxing coach, previously an asshole, seems to feel bad that the kid is such a weiner, so he announces that he can be an alternate on the team. So, proving that he hasn’t gotten any cooler at any point during the movie, the kid takes the microphone and makes a big speech thanking his parents and friends and trainer for making him feel like a champion. Buddy, you didn’t win an Oscar like Sir Laurence Olivier, or a Nobel Peace Prize like President Barack Obama, or a SAG Award like Screen Actor’s Guild Award Winner Chris “Ludacris” Bridges, you just got to be an alternate on the team after losing. I don’t think you watched ROCKY closely enough, you’re supposed to just leave humbly while everybody pays attention to the guy that won.

To his credit, Dan knows how to make a quiet exit. He’s not there at the end, he already left town, because “I’ve got some dreams I wanna chase.” Maybe we’ll see him again some day, mopping bathroom floors in a shitty Canadian ripoff of RUDY or SEABISCUIT.

p.s. There are no knockouts in the movie.

Canadian DTV Stone Cold Steve Austin
This entry was posted on Wednesday, May 25th, 2011 at 12:48 pm and is filed under Drama, Family, Reviews. You can follow any responses to this entry through the RSS 2.0 feed. You can skip to the end and leave a response. Pinging is currently not allowed.