THE ASSASSINATION OF JESSE JAMES BY THE COWARD ROBERT FORD has gotta be the longest title to a movie that I’ve ever reviewed. What’s that, 17 syllables? THE BAD LIEUTENANT: PORT OF CALL NEW ORLEANS is only 11, LEGEND OF THE GUARDIANS: THE OWLS OF GAHOOLE is 12 or 13 (depending on your pronunciation of “owls”), and both of those have colons I think, so that softens the blow. This has no colons. This title is amazing.

The movie is good too. It’s the second by Andrew Dominik of CHOPPER fame and has a great reputation, so I’m not sure what took me so long. You could say it’s a western, but it’s more of an art movie than that implies. It’s 2 1/2 hours long, it has an omniscient narrator (it’s based on a book), and most of it takes place after the James Gang’s last robbery. The titletational coward (Casey Affleck) is an eager young doofus who attaches himself to the gang for that last crime, then manages to stay in Jesse James’s life afterwards, a celebrity hanger-on like some kind of O.G. Kaeto Kaelin. 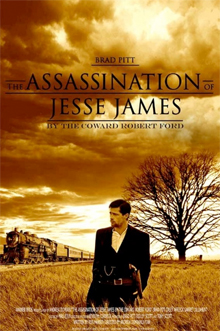 The Coward Robert Ford (they just call him Bob) grew up reading about his brother’s pal Jesse James in the magazines and idolized him. He’s one of those embarrassing fans, he doesn’t know how to be cool about it. If his brothers tease him he whines and makes it worse; if pressed he lists all the similarities between him and Jesse, including stuff like the amount of letters in his brothers’ names. This was before TREKKIES was invented, so they couldn’t just do a documentary on him.

Brad Pitt plays Jesse James, and it’s probly one of his best performances. Sometimes he seems amused by Bob’s fandom, sometimes uncomfortable with it. He grows more and more paranoid over time, and starts killing the members of his gang. When Bob decides he’s gonna help the governor (James Carville!) catch Jesse, the outlaw torments the shit out of him by acting extra nice. You (and Bob) get the feeling that Jesse knows what’s going on and lets Bob squirm and be defensive.

But Affleck is the real star and I’ve always found him a lovable goofball but this is more than I knew he was capable of. It’s a pretty complex character that straddles the line of sympathetic and creepy, leaning more into the creepy but not in an over-the-top sort of way. A good layered weirdo sad person who wants to be famous. The criminal who can’t hang with the others but wants it way more than they do and forces his way in.

The supporting cast is incredible too, one of these character actor feasts. Sam Rockwell, Jeremy Renner, Sam Shepard, Garret Dillahunt and Paul Schneider are all in there and all make an impression. There’s some nice hang out scenes, shit-shooting and personality conflicts. Mary-Louise Parker and Zooey Deschanel also show up, although they don’t get to play around with the redneck accents, tough guy poses and pistols that the men get to.

It’s a nice lookin movie, very Terence Malicky, also reminds me of MCCABE AND MRS. MILLER. Lots of wide shots, wind blowing across plants, comtemplative type of shit. It’s mostly a daylight movie, but the most atmospheric scene is that last train robbery, the masked bandits shrouded in the night, only natural light creeping through the fog (and steam?) Look at this shit: 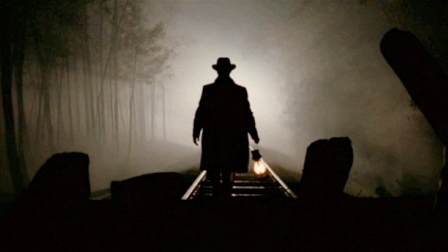 No surprise, Roger Deakins shot this one. It’s also a quiet movie with the music provided by Nick Cave and Warren Ellis, same guys that do John Hillcoat’s movies. So they’re trying to form some type of Australian arty crime movie mafia I guess.

I like that this is a different angle on the Jesse James story. It’s taking its sweet time with what might be the last 15 minutes of a traditional biopic. It’s Jesse James: The Retirement Years. The story of the legendary outlaw sitting around in his yard, having breakfast, etc. But the most unique thing about the movie is the examination of what amounts to a celebrity stalker in the Old West. I thought this was only a phenomenon of the TV age, but I guess not. Can’t believe he could know his hero’s shoe size without the internet. I guess those dime store novels were more thorough than I realized.

And the ending is an interesting “oh shit, is that what that was about?” twist on an actual historical event. The movie implies that Jesse James sort of let Bob kill him. He just read an article in the newspaper that gave him every reason to suspect Bob’s betrayal. Then he uncharacteristically took off his guns, then decided to turn his back and stand up on a chair to dust a framed picture on the wall. This is all what really happened, so could that really be why? Or did the most legendary outlaw of all time really let his guard down to do housework?

Even though I took so damn long to watch this, I was actually excited for it before it came out just because I liked CHOPPER so much. So I was surprised when it not only got way more attention than his first movie, but became one of the most acclaimed of its year, maybe even decade. Personally I prefer CHOPPER, but I have to say I’m actually surprised by how much Dominik advanced as a filmatist between movies one and two. CHOPPER has some show-offy directational bits, but I just remember that great character and incredible performance by Bana and forget about what’s surrounding him. By the time of THE LEGEND OF ROBERT COWARD or whatever he seems more polished as a stylist and more serious. More pretentious too, probly, but that’s okay, somebody’s gotta reach for the stars.

And way to bring back narrators, bud, that was a good one.

Andrew Dominik Brad Pitt Casey Affleck celebrity stalkers Garret Dillahunt James Carville Jeremy Renner Mary-Louise Parker Michael Parks Paul Schneider Roger Deakins Sam Rockwell Sam Shepard Zooey Deschanel
This entry was posted on Saturday, December 8th, 2012 at 12:29 am and is filed under Crime, Reviews, Western. You can follow any responses to this entry through the RSS 2.0 feed. You can skip to the end and leave a response. Pinging is currently not allowed.