Natalie Portman plays a New York ballet dancer who’s very good but still just does background parts. To her surprise her boss (Vincent Cassel from EASTERN PROMISES) gives her the lead role in Swan Lake. It’s a dual role and he thinks she’s perfect as the Swan Queen but not yet ready for its evil twin, the Black Swan. (It’s not like an Eddie Murphy dual role where you just wear a fat suit, she has to actually dance in a different style.) So the movie is about her struggle to please him, do a good job and not get replaced. She doesn’t want to end up like her mom (Barbara Hershey), a dancer who never really made it big, or her hero (Winona Ryder) who was forced to retire and seems to have snapped because of that betrayal. 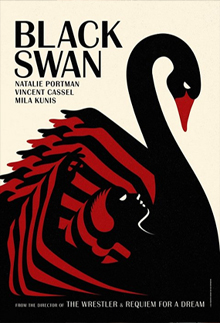 At first it seems like it’s gonna be Aranofsky doing for ballet what he just did for wrestling. Portman is shown as raw and intimate as Mickey Rourke was. Vulnerable, unmade up, unhealthy, lots of handheld cameras following the back of her head as she walks from place to place, lots of observant details about the world of a ballet dancer. For example one part I love is the montage of the elaborate routine she does to customize her shoes before dancing.

Of course she’s nowhere near as old as Ram, but she’s in a world where Winona Ryder is considered an old hag, so at 29 she figures it’s do or die for her career. And she has family drama too, although it’s sort of reverse of THE WRESTLER – Ram had to face the daughter he’d neglected, this girl has to learn to stand up to the mother who has destroyed her self esteem.

But slowly the movie turns spooky and weird. A little Argento creepiness here, shades of De Palma fever dream over there, with sudden flashes of Cronenberg body horror. I mean her toes grow together at one point, that’s not normal. Aranofsky gets alot of mileage out of small injuries: nasty hangnails, cracked toenails, scabs and blisters, a weird goosebump rash. And some bigger, nastier ones too. She’s plagued by paranoia, hallucinations and symbolism. I think it avoids landing squarely in any one genre, but it’s not for nothing that BLACK SWAN is on the cover of Fangoria this month. And there’s a quote in there where Aranofsky claims he conceived of the movie when he realized Swan Lake is about “a were-swan.”

(But never fear, he does have Mila Kunis in there though, and it doesn’t look like he kept her in a cage without food.)

I’ve heard people talk about this movie as being ridiculous or campy but enjoyable, like it’s I KNOW WHO KILLED ME or something. I think it’s much more in control than that. It’s a character drama, a suspense movie, an erotic thriller, a monster movie and a statement about art, but everything is in the right place. An elegant, if wiggly line, not a messy paint splatter. It’s carefully put together and weird in a good way, although definitely not literal enough for the young women behind me who did not know how to stop whispering questions to each other about what was going on (I think they were supposed to be in YOGI BEAR).

Portman is incredible in this role. She creates such a strong picture of this meek, intimidated but talented girl, has a hard time raising her voice or demanding what she wants, but is trying to learn to. She shows fear and self-hatred and anger at her mom. She keeps trying to bring out another side of herself but every time she tries you think nope, that’s not the Black Swan.

Then when she (SPOILER?) finally does it you know it immediately, holy shit, look at her face. A completely different person. From a scared little girl to that porcupine seductress lady in NIGHTBREED. Most of the movie she’s Nina. On the poster she’s the Black Swan.

With martial arts in movies, if you were actually an expert you would be able to tell that Keanu is faking it, but to most of us it’s believable that he’s Neo. Ballet might be like that too, but to my untrained eye it looks like Portman is doing some incredible dancing. I suspect digital shenanigans in the opening scene which seems to show closeups of a bunch of crazy footwork and then show her body and face within the same shot, to show it’s really her. But it could be real too. I read that she did ballet as a kid (before LEON?) and trained hard for a year to do the movie. This while also giving maybe the most grueling and best acting performance of her career. Throw some awards at this girl, please. Preferably ones made out of chocolate and fried dough. Every nomination should come with a free large milkshake, two jars of frosting and a spoon.

In my opinion I know very little about ballet, other than what I’ve learned from the Van Damme movies. But it’s obvious that there are parallels between the story and the Swan Lake ballet, and when the credits listed Swan Lake character names next to all the main characters I got the hint that there was way more going on here than I realized. So if I ever watch this one again I definitely plan to watch the ballet first in order to really get an understanding of what’s going on (by which I mean I will read the wikipedia entry about it and then pretend to be an expert).

But there’s another level it works on that seems more personal. Remember there was the old Darren Aranofsky that made REQUIEM FOR A DREAM, he was the fancypants filmatistic show-off with the quick cuts and bombastic music, trying to make his sounds and images as narcotic as the drugs in the story, throwing everything at you from gruesome body horror to intense melodrama to I guess not literally the kitchen sink but instead a monstrous killer refrigerator. Young people thought he was a visionary genius, slightly older people thought he was a pretentious film school weenie, and everybody else correctly believed he was a little of both. (And then they used the music on about a thousand trailers including LORDS OF THE RINGS.) A couple movies later there was the reborn Aranofsky of THE WRESTLER who was completely stripped down, the opposite of all that, using raw handheld cameras and long takes, throwing away pretty much all of the artifice and zeroing in completely on character and performance, and mostly on Mickey Rourke.

Well I think those two Darren Aranofskys are also the two swans. Whether he intended it or not this motherfucker is autobiographical. I don’t know much about his personal life other than he used to be married to Rachel Weisz and he has a mustache. But I think this movie pretty much says what he’s about. He’s a perfectionist, he throws himself into his work, he’s scared shitless, he’s shy, his work hurts his relationships, his relationships hurt him, he’s learned all kinds of technique (REQUIEM, THE FOUNTAIN) but now he has to let it go, he has to be loose, he has to surprise us (THE WRESTLER). And BLACK SWAN is both, it’s the looseness but then it spins down a drain and twists itself into a web of technique and comes out a hybrid – crazy as fuck but also precise and inevitable. It starts in a dream about a ballet and ends with a ballet that might as well be a dream.

THE WRESTLER is probly still my favorite Aranofsky movie because of the subject matter (it’s about wrestling), but to be honest this one is even better. He keeps improving through practice. I hope he’s not forcing himself to puke, though.

Barbara Hershey Darren Aranofsky Mila Kunis Natalie Portman Vincent Cassel Winona Ryder
This entry was posted on Saturday, January 8th, 2011 at 2:57 am and is filed under Reviews, Thriller. You can follow any responses to this entry through the RSS 2.0 feed. You can skip to the end and leave a response. Pinging is currently not allowed.