In BORN TO RAISE HELL Steven Seagal plays a commanding officer in the International Drug Task Force, a cooperative agency set up after 9-11 because like those ads say the drugs fund the terrorists. This is also a handy way for Seagal to use what he’s been learning as a deputy sheriff in New Orleans in a movie but then film it in Eastern Europe. His character’s partner was killed six months ago (no need for a flashback, they just tell us this) so I guess he’s out for justice or something. It’s not real clear.

While BORN TO RAISE HELL lacks the toughness and entertainment value of URBAN JUSTICE and PISTOL WHIPPED, it’s a little more memorable than most of the recent Seagal pictures, because he seems to care a little more. Admittedly there are some awkward voiceovers (I’m torn on whether it’s dubbed by a double or if it’s his own voice sped up to sound ridiculous), some of the dreaded avid farts and a scene where they use 6 cuts just showing a dude walking 10 feet from his car to talk to a guy. On the other hand Seagal is the sole credited writer and the movie definitely incorporates his recent hobby of taking part in drug raids and some of his beloved themes of brotherhood and redemption and what not. 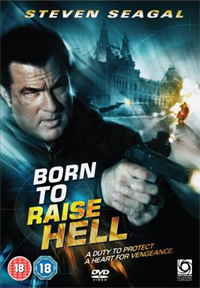 Alot of the best stuff is the little details in the police work. These IDTF drug raids seem a little crazier than the ones in Jefferson Parish (for example one guy has a motorcycle in his living room and tries to drive off) and incorporate the classic Seagalogical motif of a guy screaming about his pain (“MAAAN that hurts!”). But Seagal definitely seems to use what he’s learned on the force and seems very comfortable yelling “Hands hands hands hands hands!” to a guy so he doesn’t have to shoot him.

Seagal’s character is constantly lecturing a new officer for his amateurish procedure. He’s the old vet and the hardass. I love the disgust in his voice when the other guy hits a junkie in the headquarters. “Why you hit ‘im whi– You’re not supposed to hit somebody while I’m holding ‘im, man!”

But despite being some kind of superior officer in this agency he doesn’t get his own office, he just has a desk kind of in the corner. It figures it would be something like that.

My favorite scene is when Seagal and partners are in a surveillance van and the guys they’re spying on spot them and come over and knock on the van. Seagal decides to take his lumps, by which I mean when he gets out they try to attack him and he beats the shit out of them, even kicking one of them through a park bench. And those things are usually well built.

The bad guys do their own form of raids, but they’re home invasions. They’re led by a guy named Costello, who it’s said is a Gypsy. He offends a Russian drug trafficker because instead of being a professional he’s a sicko that goes around raping and mutilating for fun.

Seagal ends up questioning the aforementioned Russian gangster, whose name is (this will surprise you) Dmitri. This is a very high ranking guy who lives in a mansion and his son wants to play chess with him in the park, but he won’t let him because he plays chess in the park as a way of meeting with all the crooks that need to come talk to him. When Seagal gets him in the back of a police car he decides to bash his own head into the window to make it seem like they beat him.

Not a good guy, right? But the important exchange in this scene is when Dmitri says “You should be chasing terrorists in Afghanistan, not me.” And Seagal says self righteously, “I’ve already done that, now I’m over here having fun.” I honestly didn’t see this coming, but this is a bonding moment. Dmitri is ex-Russian Special Forces, he’s got grey hair and looks a little like Brando. They have more in common than they think. Probly both fought similar people in different conflicts in Afghanistan. And they both have problems with Costello, who has a bunch of super model looking gals (some of them fire breathing artists) who cook and smuggle drugs as well as perform assassinations for him. Apparently Costello’s the one who killed Seagal’s partner, now he kills Dmitri’s wife so the American and the Russian form an alliance to take the motherfucker out.

Seagal’s character has a young wife of his own. He’s having trouble at home because she thinks he spends too much time away from home being a supercop. My favorite part of this girl-trouble subplot is when he says sincerely, “I didn’t mean to make a scene last night, I apologize,” and he’s referring to beating up some guys who attacked him in a restaurant.

There are not really the amount of action scenes we used to get in the old days, but there are at least some good parts. A highlight is when Seagal blasts holes in a dotted line on either side of a door so he can kick out a whole section of wall like he’s punching out a perforated coupon. He describes Costello as “not a magician, not a commando, not a soldier, not Jesus, just a fuckin Gypsy,” which is good because he’s able to beat the shit out of him without getting much of a fight back or any walking on water or forgiving people’s sins or pulling scarves out of his sleeves. I’m not sure why the characters in this movie are prejudiced toward Gypsies, by the way. That’s a little odd.

In the end (SPOILER) Seagal goes to meet Dmitri at the chess spot in the park. He tells him he’s sorry for his loss and gives him plane tickets out of the country saying, “This was a small gesture of respect.”

This is one of the things I like about Seagal. Sometimes he wants to impale the bad guy, sometimes he wants to help him escape. He’s always been fascinated with gangsters and lately with the Russian ones. In this movie the cop recognizes a sense of honor in the gangster and respects him for it. It’s a John Woo type theme but it also fits with the Seagalogy, going back to the famous “I need time to change” scene in ON DEADLY GROUND and more recently to STEVEN SEAGAL: LAWMAN where he often feels sorry for the criminals he busts and says he wants to get them help.

I’m not clear why he’s Born To Raise Hell, though. That doesn’t seem like an accurate description of his destiny or behavior. I suppose he could be Liable To Cause a Ruckus, but I wouldn’t go much further than that.

BORN TO RAISE HELL is the directorial debut of Lauro Chartrand, a Seattle-born stuntman, fight coordinator and director of two episodes of Seagal’s upcoming show Southern Justice (or whatever it ends up being called). It has no release date in the U.S., but came out for Region 2 in October.

Darren Shahlavi Lauro Chartrand Steven Seagal
This entry was posted on Monday, January 10th, 2011 at 3:33 am and is filed under Action, Reviews, Seagal. You can follow any responses to this entry through the RSS 2.0 feed. You can skip to the end and leave a response. Pinging is currently not allowed.

51 Responses to “Born To Raise Hell”