But the true genius of director Isaac Florentine’s two DTV UNDISPUTED sequels is that each one stars the villain of the previous chapter. In UNDISPUTED II: LAST MAN STANDING Michael Jai White took over for Ving Rhames as the asshole accused rapist heavyweight champ George “The Iceman” Chambers. He was the last man standing of the title. Part III, which comes out on DVD Tuesday, is about the next-to-last man standing. Scott Adkins returns as the man whose knee the Iceman crushed, disgraced Russian prison champion and convicted double-murderer Uri Boyka. 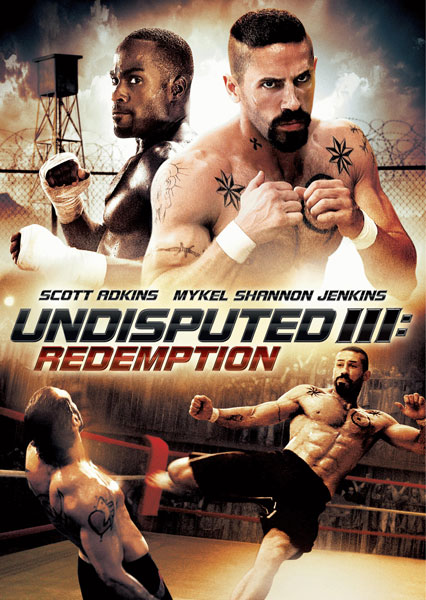 To this day I would love to see Stallone direct a movie called IVAN DRAGO, in the style of ROCKY BALBOA but telling what happened to the communist golden boy. If I never get that at least I have UNDISPUTED III, where I get to root for the menacing (and in the end honorable) villain from part II.

Most DTV action is bad for the same reasons: bland, generic characters in overly convoluted plots setting up poorly shot and staged action scenes. UNDISPUTED III succeeds by being the opposite of those three things.

Boyka is a simple character. He doesn’t talk much, and usually wants everybody else to just shut the fuck up. His life is shit but he doesn’t want anyone’s pity. He rehabilitates and trains himself in his dank cell using buckets and pullies. He’s friendly with the rats that crawl all over him in his cell, and even uses one of them to cross his heart during prayer. He’s so not a people person that when he does the ol’ begrudging-respect-exchange with his loud-mouthed American antagonist Turbo (Mykel Shannon Jenkins) it’s actually kind of sweet. Even at the end, when the kicking and punching was over, I was genuinely interested in what happened to these characters.

Marko Zaror, the Chilean asskicker so good at playing innocent manchildren in his movies like KILTRO and MIRAGEMAN, has even more fun as a hissable villain nicknamed Dolor. He seems crazy and lives a decadent lifestyle by prison standards. As the local champ he gets to sit in a lawnchair and do his summer reading while everybody else does hard labor in the rock quarry. It’s a great lightly sketched character with only one problem: I don’t see how they could make this prick the hero against the space prisoners in part IV.

The story is simple too, with the classic tournament structure but enough stakes added on the sides to create tension (for example the fighters don’t know, but we do, that after you lose a round your next fight is against the firing squad). I think too many modern filmatists miss the importance of an elegant, streamlined story in a bare knuckle, headbutting kind of film. Not Florentine.

And of course the main attraction is the fights. In-the-ring competition is usually the most boring type of cinematic martial arts, but Florentine and choreographer Larnell Stovall make it thrilling. Since the fighters are from different countries they represent different styles, for example Lateef Crowder (you saw him in TOM YUM GOONG/THE PROTECTOR) uses capoeria. You can’t call these fights realistic (Boyka sure is doing alot of jumping and flipping for a dude with a bum knee) but that’s why I’m watching this and not one of those shitty street brawl videos. It’s an exaggerated style that creates its own skull-crushing reality. You get the feeling a muscle is torn or a bone is crunched with every hit. And yes, Adkins does his trademark flying double spin kick where the first pass is a fake-out and the second one connects. In my opinion it’s a better trademark than Van Damme’s doing-the-splits.

So what you have here is a fun, fast-paced, completely badass martial arts movie that when you think about it is also a testament to the concept of second chances and finding good in the worst people. Or at least finding fighting skill.

You definitely don’t need to have seen the other UNDISPUTEDs to understand what’s going on here, but I recommend watching part II first to get the full effect of the villain-turned-hero. I’m actually not a big fan of the original, despite the usual great performance by Wesley Snipes. This is the rare series where the DTV sequels are better than the theatrical original. I’m not yet prepared to declare which of the sequels is better. I miss the dry humor of Michael Jai White, but I think the fights might be even better this time. They might be tied.

Fans of DTV action already know these movies, but they’re good enough to break through into the mainstream. I know at that Actionfest film festival the jury (including our wayward son Moriarty and Chud’s Devin Faraci) were so impressed with this they changed the rule to give it a couple of awards. I recommend watching UNDISPUTED II-III and if you like those you can go back through the other films of Florentine and Adkins.

Florentine is the king of DTV martial arts and Adkins is his kickboxing DeNiro. Adkins stole SPECIAL FORCES in a supporting role as an asskicking SAS officer. He played #2 bad guy in THE SHEPHERD: BORDER PATROL (that was taken away from Florentine in the editing, but it has great fights and Jean-Claude Van Damme carries around a bunny for the whole movie). And he had the lead in the recent NINJA, which I think is underrated. It’s a solid use of classic ninja tropes and weapons, a charismatic villain and great fights (especially the one on the subway). It even has Big Oil executives who are also robe-wearing cultists. But admittedly when he’s not fighting Adkins is a little bland as the ninja Casey (playing American for some reason).

Non-Adkins Florentine joints include BRIDGE OF DRAGONS (a Dolph Lundgren fantasy movie, but not literally about dragons) and US SEALS 2 (which I honestly like better than the studio movie it’s a sequel to a rip-off of). As a martial artist himself Florentine is very passionate about the choreography, and having built up his directing chops doing that tv show “Power Rangers” he has a strong foundation of energetic camerawork that emphasizes the action instead of muddling it like most directors do these days with their wobbly cameras, quick cuts and inept closeups.

Years ago I claimed the DTV beat as my own because I got a laugh out of trashy unwanted sequels and increasingly weird vehicles for action stars of the ’80s and ’90s. But I justified it with an idealist pipe dream about this format, that there was no reason these low budget, under the radar movies couldn’t be like the ones from the Roger Corman days: a training ground for interesting new directors and a place where they were given the freedom to do whatever the fuck they wanted as long as they finished the movie on time. Well, maybe it’s not quite that, but in the last two years the standards for direct-to-video action have raised a hell of alot. I truly like last year’s BLOOD AND BONE (starring Michael Jai White, directed by Ben Ramsey), this year’s UNIVERSAL SOLDIER: REGENERATION (directed by John Hyams) and Florentine’s two UNDISPUTED sequels better than pretty much all American action movies released theatrically in the last few years.

I’m hesitant to say it, because I wouldn’t want these guys to get wasted on mediocre Hollywood movies, but the studios are idiots to keep hiring inept commercial and video directors to do their bidding when proven directors like Florentine, Hyams and Ramsey are right here under their noses. Well, okay, they’re probly all in Bulgaria somewhere, far from their noses. But the movies speak for themselves. These guys are making much more entertaining and better crafted movies for nothing and most likely under more difficult conditions than the Hollywood pansies ever dreamed of. Why is it I keep spending money to watch incomprehensible bullshit action scenes projected onto a giant screen while Florentine’s carefully crafted ones go straight to my cramped living room? That seems backwards to me.

I’m not saying the guy is gonna make 2001. But give Isaac Florentine a Punisher, a GI Joe, a Transporter, or better yet just tell him “here is a modest Hollywood budget, go make a kickass action movie with Michael Jai White and/or Scott Adkins,” I guarantee you he’ll knock your socks off. And you don’t need those socks. You don’t deserve those socks if you don’t notice this shit. I deserve your socks. Hand them over.

Nah, forget I said anything. I hope he does UNDISPUTED IV with Zaror and an Adkins spin-off called BOYKA. You guys can keep your shakycams, I’ll be happy over here.

DTV DTV sequels DTV sequels better than theatrical originals Isaac Florentine Larnell Stovall Lateef Crowder Marko Zaror Scott Adkins
This entry was posted on Tuesday, June 1st, 2010 at 12:50 am and is filed under Action, AICN, Martial Arts, Reviews. You can follow any responses to this entry through the RSS 2.0 feed. You can skip to the end and leave a response. Pinging is currently not allowed.

90 Responses to “Vern recommends the shit out of UNDISPUTED III: REDEMPTION!!!”