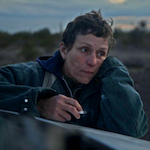 Adapted from the non-fiction book Nomadland: Surviving America in the Twenty-First Century by the journalist Jessica Bruder, these are characters and/or real people – mostly of what used to be called “retirement age” – who have either chosen or been forced into a life living in vans or RVs, crossing the country to take on different seasonal jobs. Fern’s husband died, and then the mining town where they lived did too, and for years she’s been “doing the van thing,” as a friend she runs into at a store describes it. Everyone she knows from before seems concerned for her, and offers to let her stay with them. And we will learn over the course of the movie that it’s not just pride that makes her turn down their offers.

We first see her report to a winter job at an Amazon fulfillment center. The people are nice. It doesn’t seem fun. She shows off her van to co-worker Linda May, who tells her about an annual event in the Arizona desert called the Rubber Tramp Rendezvous. Fern resists, but ends up attending this real life event run by vandwelling guru Bob Wells, who plays himself. (The movie takes place in the early oughts so it’s a small get-together – 10,000 people showed up to the one in 2019.) 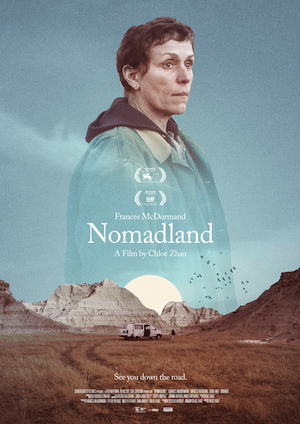 It’s basically a convention for people interested in a nomadic lifestyle, sharing tips about vehicle maintenance, where to park without getting into trouble, etc. So we get to learn some things over Fern’s shoulder. A woman gives a presentation about choosing a bucket to use as your toilet on the road. Everyone chuckles when she shows the tall one you can use if your knees are bad.

I think this is something that’s interesting about the movie: it’s not about feeling sorry for anyone. It’s very respectful of the idea that many of these people really enjoy the freedom of moving around and not being tied down to a piece of property. Fern really doesn’t seem to know how to be happy living in a house, and it must be nice to see so many sunrises, or to be able to drive right up to a beach and watch the waves crash during a storm, or even to work at a national park for a while. There’s also an appeal to the strong human connections they’re making, meeting others they consider of their tribe, coincidentally running into the same people in different parts of the country. I like the scene where she shares a beer with some hippie kid (who I was convinced had to be related to Sean Penn) because they both remembered her giving him a cigarette in some other city months ago. It’s an overlap of these two vagabond lifestyles, one for young people resisting pressure to go to college/get a job/settle down/grow up, one for old people who can’t or won’t retire.

But I feel like it gives the lifestyle dignity without glamorizing it. The thing we see right before the title comes on screen is poor Fern on the side of the road, squatting next to a barb wire fence to pee. In retrospect that might’ve seemed like a great luxury compared to the bucket. We only see her use it once, and never learn where she empties it, but seeing her get a knock on the window while she’s in there having stomach issues sure convinced me that the nomad life is not for me.

So it’s never lost that however much some people may want to live this way, or may find meaning in it, it is something many or most of them have resorted to as a consequence of economic injustice. They’ve been compared to the trainhoppers during the Great Depression, a similarly complicated mixture of freedom and oppression. I just wish they really had a choice of how to live. My grandpa was in the army and then worked at the post office, had three kids, and after retirement was able to visit most of the lower 48 in an RV without losing his house. That used to be a thing our economy allowed.

One way I think the movie plays down the negative side, but that I appreciate, is that there aren’t really bad guys in it. The biggest confrontation is one little incident where someone knocks on her window and tells her she can’t sleep there. There are characters who are clueless, like her dipshit brother-in-law and his friends who stupidly talk real estate investment in front of her, but honestly she’s ruder to them than they are to her. In the real world I bet they deal with more assholes and people intending them harm than we see here, but it makes for a more interesting movie to set all that aside.

The director is Chloé Zhao, who has been nominated for best director for this. I’ve been meaning to see her previous movie THE RIDER, which many raved about, and she did one before that called SONGS MY BROTHERS TAUGHT ME. I’m told they’re both great and similarly use non-professional actors. While filming NOMADLAND she was also in production for Marvel’s ETERNALS. Somehow it’s both totally predictable and completely improbable that this particular director would end up doing a giant MCU space people movie. I love when an indie/arthouse/smarty-pants director does mainstream entertainment and brings something unusual to it, but these days it’s also common to just have to compromise and abandon what was special about your movies in the first place. I’ve read that she insisted on more location shooting than normal Marvel, but is that enough? Did they allow her to round out the cast with a bunch of real Eternals playing themselves? I guess we’ll find out soon enough.

Oh, also she’s supposed to be doing a Bass Reeves biopic and a “futuristic western DRACULA,” so now that I think about it I’m all for her straying from her indie roots.

As interesting and memorable as NOMADLAND is, I do have an issue with it. In cursory research I didn’t see anyone else with this complaint, so it’s probly just my weird thing, but I feel like I should mention that I found the specific way it combines reality and fiction very distracting at times. I love the authenticity non-professional actors bring to movies, and they’re the most interesting part of this one. But at the beginning we’re being introduced to this fictional character of Fern and seeing how rough her life is and sympathizing with her. And we understand that this is a fictional movie portrayal of something that’s a reality for many people. But right away she’s talking to people who we instantly recognize are real people really living this way.

For much of the movie it seems like McDormand is the only actor. It’s like one of those prank movies, like BORAT, except the prank is they tell her a true story about their husband dying and losing their house and then she tells them a fictional one and together they pretend like they’re in this together. It took me a while to be comfortable with one of my favorite actors, who is an Academy Award winner and married to one of my favorite directors, also an Academy Award winner, nodding along to these stories like she’s been there. I honestly can’t tell if she’s giving a performance as Fern, or being the good human I assume she is and listening and offering sympathy. So it took me out of the movie.

I don’t remember much about Steven Soderbergh’s BUBBLE, but I remember the lead was a non-professional actor who worked as a manager at a KFC, and she played a factory worker. I thought it really worked, but don’t you think it would be distracting if, like, Julia Roberts played one of her co-workers? It’s kind of like that – there are all these real people being real, with one actor at the center. And then you spot David Strathairn so okay, this is going to be a major character.

When it got more into those two together, their fictional lives and families and backstories, I was able to let go of that baggage and enjoy it as a movie rather than an uncomfortable simulation. And some of the best stuff is just Fern hanging out with Linda May or talking to Swankie, where it really feels like a genuine friendship bloomed between Academy Award winner Frances McDormand and nomadic workers Linda May and Swankie. But then there’s a heartbreaking scene toward the end where Bob tears up talking about how he deals with the loss of his son to suicide. It’s a moving, human moment, a human being (who knows what he’s doing) opening up in front of the camera. It’s beautiful, but in the context of the movie the point of the scene is not this man’s real experience, but the lesson it teaches to a fictional character.

I’m not saying there’s anything wrong with that. I just had to work to go along with what the movie asked me to accept. I know it was McDormand who bought the rights to the book, wanted to tell this story, and recruited Zhao to direct, in her particular way. And I’m sure it’s a better outcome than if it was all actors playing nomads. But for a while I definitely wished it could just drop the facade and be a documentary about these people. At times it almost is, but they’re talking to “Fern” instead of the camera.

So I was excited when I read that there’s at least a documentary short based on the same book. It’s called CamperForce and it’s on the DVD for the feature THE HOTTEST AUGUST by the same director, Brett Story. CamperForce is good, and is very different from NOMADLAND. It’s about a couple in their ‘70s who lost their life savings in the 2008 stock market crash so instead of retiring they live in an RV (a really nice one compared to the ones in NOMADLAND) and get $11 an hour to move things around in an Amazon warehouse. As NOMADLAND implies, Amazon has an actual program specifically for temporary workers living in RVs. I was most unsettled by the young Amazon employees – themselves cogs in the machine just doing a gig – leading seminars about the lifestyle of what they call “workampers.” (Isn’t that fun?) Everybody in the room puts a good spin on it, flipping through the brochure considering if this is the best option for them, trying to make it work rather than dwelling on the fact that this very program is a nightmarish consequence of modern capitalism.

Anyway, I will check out those other two Zhao movies, and look forward to futuristic Dracula, and keep my fingers crossed that all of us can stay off the bucket if we so choose.

best picture nominees Chloe Zhao David Strathairn Frances McDormand
This entry was posted on Monday, March 22nd, 2021 at 11:21 am and is filed under Drama, Reviews. You can follow any responses to this entry through the RSS 2.0 feed. You can skip to the end and leave a response. Pinging is currently not allowed.