This would’ve been a perfect opportunity for another “is…” movie. James Belushi is… THE PRINCIPAL. But director Christopher Cain (YOUNG GUNS) let that one fly by. Anyway, in this drama-leaning-toward-action James Belushi plays Rich Latimer, a fuckup teacher who’s punished by being “promoted” to principal of Brandel, the crime infested cess pool of an alternative school where all the district’s worst troublemakers get shipped off to after they light a teacher on fire or crash a stolen hot air balloon whatever. Those are not specified but I’m assuming that’s the type of stuff they did. You know this place is bad when Latimer stops by to check it out during non-school hours and gets mixed up in a fight and car chase. 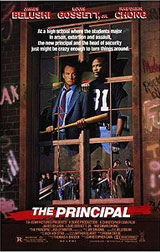 The Principal doesn’t have any combat training like Shale and Thomasson in the SUBSTITUTE series, he’s just some stubborn macho dude. He’s introduced drunk at a bar, his ex-wife comes in with their divorce lawyer, so he steals an autographed Louisville Slugger from behind the bar and goes after the lawyer and especially his car. Latimer lives in a shitty apartment, tries to live off of protein shakes but doesn’t even have milk, so he mixes with Coke or Coors. (Tip: try tap water next time.)

A couple other notes about Latimer: he always seems to be hanging out or around the school when it’s empty. I don’t know why he doesn’t just move in. Keep some milk there. Also, I swear he yells “Son-of-a-BITCH!!!” at least four or five times. That almost should be the name of the movie.

Brandel is as out of control as any of the schools in these movies I’ve been watching. These little adult shits got no respect for education, authority, common decency, or anything else. They beat each other up, they openly sell and smoke joints in the school. They don’t even wait for lunch time. Everyone (including teachers and security) is afraid of Victor Duncan, the student who runs the drug trade at the school and has henchmen and everything. In fact he has one henchman who snaps his fingers and everybody knows it means to leave the hallway or whatever when he does it. Anybody who can command a crowd of people by snapping his fingers you don’t want to fuck with, but you especially don’t want to fuck with the guy who the guy who snaps his fingers answers to.

If you ever watched HOMICIDE: LIFE ON THE STREET this guy is basically high school Luther Mahoney. But if you ever watched MONEY TALKS he’s actually the actor who played Aaron, Chris Tucker’s old friend and arms provider.

Latimer has fucked up the rest of his life so bad that he decides to draw the line here. He wants to make this school better. His strengths are tenacity and a strong aversion to bullshit. He casually swears in front of students, violently defends himself when necessary, makes threats. He holds his head high, makes smartass remarks. But he’s got a hell of an uphill battle. His get-tough assembly turns into a riot. A student he makes a connection with is put in the hospital. So is a teacher he likes in a special grownup way (Rae Dawn Chong).

Some things The Principal does backfire, but then so do some things that Victor Duncan’s people do. When they dis-assemble Latimer’s motorcycle he has the autoshop students fix it, and they decide to also airbrush “El Principale” on his tank and helmet. He feels so good about it it inspires him to chase after them off school property and fuck with their drug transactions. He carried a baseball bat before LEAN ON ME (but not before the real Joe Clark. But it would’ve been cool if that guy got the idea from James Belushi. Maybe next time).

Latimer drives his motorcycle inside the school and up the stairs when there’s trouble. After a bunch of thugs put a bag over his head and beat the shit out of him he just takes it off and goes back to work, covered in blood. At the end he has to fight the gangsters inside the school while the students wait outside, exactly like in 3:15. He kicks Duncan in the balls and tosses him out the front door of the school, bringing inspiration to the student body and faculty even though it’s just a symbolic gesture and won’t really solve the school’s problems. But who knows, maybe it was like the 300 Spartans and it inspired everybody to finally straighten out Brandel. Or maybe the snapping guy didn’t have it in him to snap anymore, and everything was peaceful again.

Louis Gosset Jr. is the head of security (or custodian?) who seems like a really good guy to have on your side… except he’s not really that much because he doesn’t do jack shit to help until the end of the movie. In one scene a substitute teacher comes storming down the hall, papers falling out of his briefcase, saying, “You can’t pay enough for anyone to substitute here!” And Louis just laughs.

As far as I know this is the only movie so far where the father of someone who played Superman directed the brother of a Blues Brother, but there’s still time for Brandon Routh’s dad to hook up with Peter Aykroyd. I wrote something before about relatives of more famous actors, how it’s unfair that we can’t get it out of  our heads that they’re the less cool son or brother of so-and-so. I think James Belushi suffers from some of that curse, but also he’s had the bad luck to do a bunch of cheesy movies, so maybe we’re just associating him with those. But you guys called it – he’s good in this, I like him. He actually doesn’t remind me of John Belushi here as much as Bill Murray. Burnt out, hair long on the back, receding in the front, hated by many, liked by the audience, mutters smartass comments that only amuse himself. He’s probly a little nicer than most Murray characters would be, though, tutoring Jacob Vargas (SLEEP DEALER, DEATH RACE) to read after school, Kelly Minter (A NIGHTMARE ON ELM STREET 5) before school so she won’t have to sell drugs, tracking down Baby Emile (Troy Winbush) after school to prove to him that somebody gives a shit. And it’s kind of more touching when it’s coming from this fuckup loser guy than when it’s some saintly crusader like in most of these movies. I’m surprised how much I enjoyed this movie.

back to school James Belushi
This entry was posted on Tuesday, September 22nd, 2009 at 12:51 am and is filed under Action, Drama, Reviews. You can follow any responses to this entry through the RSS 2.0 feed. You can skip to the end and leave a response. Pinging is currently not allowed.

24 Responses to “The Principal”