It turns out Shale and Jane joined the Peace Corps and went to teach in Costa Rica. (I guess he was just fucking around at the end of part 1 when he said he wanted to go to L.A. to teach. Or maybe this is a tribute to the way DEATH WISH 2 refuses to follow the sequel setup from the end of part 1.) 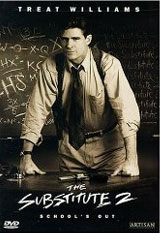 Williams plays Karl Thomasson, a special ops guy who happens to know Shale from work, but that’s not important to the plot. Thomasson is an expert on defense who teaches countries or something (it’s vague, secretive and mysterious). He comes to New York after his brother, a teacher, has been murdered by a gang. Thomasson doesn’t seem to be aware of Shale’s substitute teaching, but he decides to do the same thing. Dangerous minds think alike.

True, this is pretty much just a rehash of part 1, but unlike say a WILD THINGS 2, a CRUEL INTENTIONS 2 or a THE SKULLS 2 it’s a really enjoyable rehash. Williams, not being as outwardly scary as Berenger, has to demonstrate his skills more, and has to fuck with them psychologically. The way he introduces himself to the class is classic. He takes out a yo-yo and uses it to illustrate a concept about perception. The kids are rightfully thinking oh jesus. It seems like he’s some dumb nerd who watched DEAD POET’S SOCIETY too many times and thought he could make a difference. But come on man, a fuckin a yo-yo? Where are the juggling scarves? The magician hat? The kazoo?

But then he says that yo-yos were invented as a weapon in the Phillipines and he uses his to explode a smartass kid’s 40 ouncer of orange drink.

That’s one area where the sequel expands on the first one: I think the time spent in class is more valuable. I think Shale genuinely bonded with some of the kids but didn’t know what to tell them other than “stay out of a gang.” I like that Thomasson spends a little more time trying to teach them. There’s another great scene where he throws a kid’s boombox out the window to teach him what “impasse” means and what can happen when neither side will compromise. This leads to a knife fight. Then he has to leave class (knowingly walking into an ambush) so he puts that same kid in charge, clearly gaining his respect in an ANY WHICH WAY YOU CAN type of way. Beer’s to you, my amigo, for all that we’ve been through.

There’s alot of other shit going on too. Michael Michele from HOMICIDE: LIFE ON THE STREET is a love interest and connection at the school. Thomasson has to look after his niece (Susan May Pratt – kind of bad in the movie, but I forgive her) and does a better job bonding than Ryback does with his niece in UNDER SIEGE 2 when they met under similar circumstances. He meets a former tunnel rat janitor at the school who shows him how to climb around in the vents and provides him with vintage weaponry (corny, but kind of amusing). Instead of a whole team like in part 1 he just has one loyal badass merc buddy (Angel David) who joins his crusade for no upfront pay. See, this is what I was hoping Liam Neeson’s buddies in TAKEN would be like. This guy spies for Thomasson, even faces off with some gangsters (led by the rapper Guru from Gang-Starr) who are torturing a guy, backed only by Thomasson shining a bunch of laser pointers to make them think they all could get sniped. Everybody should have a friend like that.

I actually didn’t catch while watching it that the friend in question is supposed to be Joey Six, Raymond Cruz’s character from the first one. (It turns out he ultimately decided against the topknot style ponytail.) I don’t know if this speaks highly of mercenaries in general or just of Joey Six, but here is a guy who risked his life repeatedly as favors to at least two different merc buddies. I’m sure he’d help them move too if they asked.

In my review of part 1 I said that the American education system can’t be that bad because we had a ninja teaching. I take that back. Sure, we got another ninja type teacher here, but it’s also becoming clear that there’s way too much crime in the public schools. In this case it’s a chop shop run by the auto shop teacher (B.D. Wong, MEN OF WAR, EXECUTIVE DECISION), himself a merc who’s willing to murder to cover his tracks.

I like a movie that combines that kind of ludicrousness with a touch of subtlety. One of the bad guys is the only white male we see at the school. He pretends to be nice and is very close to deflowering Thomasson’s niece. But he’s secretly involved with this gang and complains that he had to do it because his dad wouldn’t buy him the expensive car he wanted.  The subtlety I refer to is the shot in his bedroom that starts on some gangster rap poster and pans across his other things – Godzilla toys, skateboard stickers, all the phases he’s gone through. Unlike the black and Hispanic kids in that class this kid has the luxury of using the gang as just another hobby he floats through. Or a summer job. He doesn’t have as much of an excuse for not knowing a better way out.

So credit is due to Roy Frumkes & Rocco Simonelli, writers of the original SUBSTITUTE script before it was rewritten by our man Alan Ormsby. Here they get sole (duel?) credit. The director is Steven Pearl, who you will remember was second second assistant director on BILL AND TED’S EXCELLENT ADVENTURE.

In a way these movies are kind of the anti DEATH WISH. They see a similar reality of youth out of control, but instead of just blowing them away these movies take a shot at teaching them first. It’s DEATH TEACH.

The end of part 2 is more dumb than the rest of the movie, but in a funny way. In part 1 the action climax was in the school, but at night. Thomasson ups the ante by confronting the bad guy during class. That means auto shop, which means karate vs. welding torch. What I love is that all the students just watch and enjoy themselves. When Wong is dead they act like that’s the end of that. Well, that settles it. And Thomasson smiles, leaving the corpse just laying there. The janitor tells all the students to go back to class, show’s over, like all it was was a little fight. Shit, even if it was just a scrap, it was between teachers, that would be a pretty big deal, wouldn’t it? I guess around here they’ve seen everything, they’re jaded.

If I had to choose the best substitute I’d take the obvious choice, Shale. But I really like this character Thomasson, and with Williams playing him it was really smart to not just play him as a Shale copycat. This guy is actually not so out of place as a teacher. He seems to be more educated, and doesn’t try to hide it. An intellectual soldier. Before he becomes the substitute there’s an incident where some gangsters drive by him. One says, “Yo, asshole!” He smiles and asks “Are you addressing me?” It just made me laugh, he doesn’t mind using formal language when somebody says “you, asshole!” to him. Next thing you know he’s been shot at and broken a wrist. This guy is smarter than you and deadlier than you. So quit fucking around and do your homework.

B.D. Wong back to school DTV DTV sequels Treat Williams
This entry was posted on Tuesday, September 15th, 2009 at 2:07 am and is filed under Action, Reviews. You can follow any responses to this entry through the RSS 2.0 feed. You can leave a response, or trackback from your own site.

23 Responses to “The Substitute 2: School’s Out”