THE SUBSTITUTE 3 is much shittier than the previous ones, but still fun because I like the Thomasson character and because of the goofy way returning writers Frumke & Simonelli and new director Robert Radler (BEST OF THE BEST 1-2, various POWER RANGERS episodes) decided to mix things up (hint: more white people). It opens with Thomasson (still Treat Williams) a prisoner in Kosovo. His partner (David Jensen) is tortured nearly to death, but still jokes that he tipped them for their troubles. Before escaping captivity Thomasson has to put the poor guy out of his misery and make a promise to deliver a message to his daughter (Rebecca Staab). 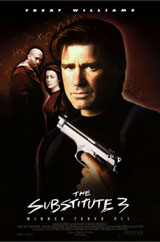 The daughter is an English professor who – well I’ll be damned! – gets assaulted while Thomasson is in town. So he gets a swordsman (James Black, LOVE AND A BULLET), a martial artist (Claudia Christian, HALF PAST DEAD) and a surveillance expert (Frank Gerrish?) and sets up shop as a substitute college professor. (By the way, in this one we learn that he has a doctorate in contemporary literature, and that he’s read War and Peace in the original Russian. So I was write, he’s more qualified for the teaching part of the job than Shale was).

The bad guys this time aren’t kids in gangs, they’re musclebound football players who think they should get a passing grade without earning it. It’s a nice break for the urban youth, they can sit this one out and just relax, and maybe have a laugh at these mostly white bad guys. They look too old to be college students and act too young, it’s kind of embarrassing. Then since they’re buying steroids from the mob the substitute kind of forgets about them and starts going after mobsters.

So this one gets away from the school more than the other ones, which I consider a weakness. There’s a whole section about Chistian putting on fake boobs and going undercover as a waitress at a small Hooters type bar where one of the mob guys hangs out. Good thing they needed a new waitress that day. I guess they don’t want to be too lazy about rehashing parts 1 and 2, but having less at school makes it seem more like any other action movie. Still, there’s a part where the guy they’re after (who looks like Kid Rock) yells at a drug supplier who’s raising his prices, and he says something about how dare you come in here and try to “lean on me.” And I would like to think that’s a reference to that movie where Morgan Freeman is a lovable mean principal who locks everybody in and chases people with baseball bats so that– well, you know, because of learning and everything.

There’s a good classroom scene, but not as good as the others because the characters in this one are so laughable. I kept forgetting it was supposed to be college, and whenever I remembered I couldn’t figure out why the non-football players didn’t seem annoyed that those fuckos keep disrupting class so that no learning ever happens. Don’t you still have to pay for college? I thought you did. Anyway, Thomasson teaches them a lesson about Vietnam and guerilla warfare by convincing a big linebacker to take swings at him. His trick is to keep dodging punches, because in Special Forces I guess you learn to dodge punches. He explains that he “never initiated contact” but made the guy chase him around, wearing himself out. Brains over brawns.

It’s a pretty good history lesson, except this is English class. Football team wins again. This is what convinces the jocks that they need to get rid of the substitute, but they’re either too dumb or too proud to play the “he should be fired for beating me up in class” card.

You know, I’d really like to see a substitute movie where he really teaches, and there’s a parallel plot where he has to help the serious students prepare for the SATs or something. I guess that’s sort of like CLASS OF 1989 1984, where the teacher had to balance fighting maniacs with making sure the music recital went well. I hope something like that happens in part 4, but if not they could do THE SUBSTITUTE 5: NO CREEP LEFT BEHIND. If Treat won’t do it I nominate Ray Stevenson.

At the end Thomasson has made his dead partner’s daughter respect the military more, but as far as I could tell he didn’t do anything about the guy who attacked her. Maybe that guy was one of the people who got killed, I’m not sure. It’s weird because the same thing happened in part 2. His niece told him who killed his brother, then he went to fight somebody else and it was never mentioned again. I mean, I can’t really be sure who the winner is, so how do I know who takes all? I’m starting to wonder if these things are meant as a subtle commentary on militarism, with even the greatest military minds still losing track of their original goals and leaving things a mess. I like this Thomasson, he gets shit done, but he needs to get a 3×5 card, write down what his goal is and carry that around in his pocket, then check the card at the end to make sure he remembered to resolve everything.

back to school Claudia Christian DTV DTV sequels Treat Williams
This entry was posted on Wednesday, September 16th, 2009 at 2:34 am and is filed under Action, Reviews. You can follow any responses to this entry through the RSS 2.0 feed. You can skip to the end and leave a response. Pinging is currently not allowed.

11 Responses to “The Substitute 3: Winner Takes All”