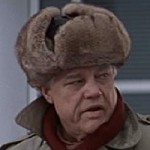 Loosely based on an actual guy, WALKING TALL is the story of Buford Pusser (Joseph Donald Baker), a soldier turned professional wrestler who moves his family back to his hometown in Tennessee, only to discover that things have changed a little bit. You know, same way they always did in blaxploitation movies. Suddenly there’s a bunch of criminals running the town, selling (in this case) moonshine. You can’t go to a bar without getting in a fight and a woman can’t even step one tippy toe onto God’s green earth without a bunch of drunken yahoos doing donuts in a pickup truck yelling “whooo hoo” and trying to grab her boobies. (Not that this literally happens in the movie as far as I remember, but you know, it’s that kind of movie.) 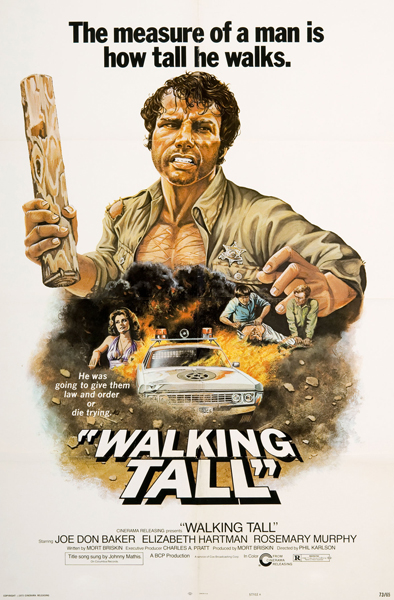 Pusser is a badass, but he’s a vulnerable badass. He really has to get his ass kicked bad before he shifts into first gear. He’s not like Zatoichi. Zatoichi wanders into town blind as a bat, but he’s confident enough to cheat a room full of samurai at a dice game, then scare them off. Pusser does the opposite. He sees his friend getting cheated and tries to speak up, so they beat the living piss out of him, stab him about a thousand times in the belly and toss him on the side of a dirt road like a cup full of tobacco spit.

The end. Kind of a lame movie.

Well no, obviously I’m bushing. Somehow the puss man lives, and he tries to take these fuckers to trial, even tearing his shirt open to show all the scars right there in court. But the justice system goes nowhere. These guys, especially the sherriff, are all part of the problem. So to the dismay of his wife, what he does is run for sherriff himself, and win. (The current sherriff tries to run him off the road, but does a CHiPs style car-dive over a ledge himself. Buford is honorable enough to try to save him, but no dice. Tough luck, sherriff.)

So after that of course you’ve got the story of the brutal lengths Sherriff Pusser has to go to clean up the little town, and the risks this creates for his family. I guess it’s one of those Joe Clark type of characters, who probaly in real life you could argue that what they’re doing is insane, but in a movie you gotta root for them and they spend alot of time showing you why the guy is so eccentric and great. My favorite scene of this type is when he sits back rather than help his afro-american (remember, this is 1973) deputy in a confrontation with a bunch of racist white drunks. At the end the deputy stumbles out of the bar, his uniform torn to bits, but having earned the respect of the crackers who thought he wouldn’t be able to stop them.

(try that one in real life.)

Morally it’s a little more forgiveable than DIRTY HARRY (a much better movie otherwise) because in this fantasy world, there really is no other choice but to sit back and take it, or go kill the bastards like Buford does. The movie really twists your nipples trying to get you outraged. Like the scene where he and his wife and kids are playing board games, but he hears a noise outside and has to go outside for a shootout. Next thing you know he comes in bawling, covered in blood, carrying his dead dog. Right in front of his kids. What a fucking bummer, man.

Even more brutal is the scene near the end where he’s driving with his wife, suddenly somebody just drives by and shoots her in the back of the head. And when he pulls over to see if she’s alive, they come back and shoot him in the face. The scene has an authentic horribleness to it and sure enough, if you read the official Buford Pusser web sight it looks like that was one of the few parts that came from real life. I wonder what it was like for the real dude to watch that, then? Badly injured in the actual incident, he was no longer doing police work, and spent his last years travelling around living off the notoriety of the movie and its sequels. Then he died in a car accident.

At the “Buford Pusser Museum” shown on the web sight, they have the movie posters for the first two WALKING TALL movies and between them is a rack full of sticks like he often carried to intimidate criminals. (He took that “talk loud and carry a big stick” thing literally.) To many its that image, the angry redneck sherriff carrying around a 2×4, that is most memorable about this movie. But to me the great badass moment is the end, when he comes out of the hospital after being shot in the face, his entire face covered in a cast like he’s some mummy or something. He crashes his car right through the side of the tavern where this shit all started. And then he sits back and sheds a tear as the fed up townspeople carry all the furniture out through the hole in the wall, pile them up and light them on fire.

(I don’t think the real guy ever got that satisfaction, and I know for sure he was still in the hospital during the wife’s funeral. Sorry to bum you out.)

It’s manipulative and visually its pretty mediocre, but I gotta admit, I enjoyed this movie.

Joe Don Baker
This entry was posted on Thursday, July 22nd, 2004 at 12:16 am and is filed under Action, Crime, Reviews. You can follow any responses to this entry through the RSS 2.0 feed. You can skip to the end and leave a response. Pinging is currently not allowed.

One Response to “Walking Tall”