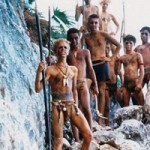 Here he comes… one of my favorite online reviewers. It’s been too long, so it is a genuine pleasure to re-introduce the one and only Vern…

Vern here, still alive and ready to unveil my first “the ain’t it cool news” review for 2004. Unfortunately Seagal’s new picture with Ringo Lam is not done yet so instead I gotta review some movie about Battle Royale 2 by Kinji Fukasaku and son.

Previously on the Ain’t It Cool News: Battle Royale part 1 is a Japanese picture about a near future where school kids are put on an island by the government and forced to kill each other off. The survivor gets to live, so everybody has to decide whether to a) be all ethical and shit or 2) try to survive. It’s a pretty good movie and because it is brutally violent and not american, it has a big cult following here in my country of USA.

Battle Royale part 2 is the highly anticipated sequel, originally directed by Mr. Fukasaku again but he passed away and his son finished the job. It has been reviewed a couple times on here before by people who hated it and said to fuck it and etc.

And now, the exciting conclusion. I really liked this picture.

My tastes are different from most of the newsies, so I’m not saying you boys will agree with me. But I think it is one of those fucked up, more ambitious sequels that instead of just retreading the first picture, as the pussies want it to, goes in a different direction and only brings along the brave souls who want to see, like, a new movie. It is like the Executioners to Heroic Trio, or Return of Batman to Batman 1, or maybe Mad Max Goes Beyond the Thunderdome, if it was as good as Road Warrior. It doesn’t succeed in everything it tries but if you’re like me you get a kick just watching it try.

Let me say though that I didn’t think BR1 was the greatest picture ever. It was a wonderful outrageous premise. They used it more for violent nihilistic exploitation type business than for satire, but that’s fine. My problem was there are so many characters that die so fast that I never really got too attached to any of them. One of the survivors returns in the sequel but to be frankly honest, I don’t even remember the dude. If he was Beat Takeshi I would remember him but he’s not, he’s some other dude.

But that’s not to say it’s a bad movie, in fact I thought it was a real good teen movie and I believe it tied with Larry Clark’s BULLY in the Outlaw Awards for best teen movie, although I forgot to announce the winners that year. Congratulations to Bully and Battle Royale. If you are still a teen after a couple years later go out and see these fine movies for our young growing citizens.

Anyway, everybody said BATTLE ROYALE would never get released in the US, but I honestly thought it was the japanese movie most perfect for an american remake (as long as we’re doing those). It’s a universal premise but it could be adapted to the details of different cultures, and especially in a time when america was obsessed with watching real people stab each other in the back and humiliate each other for money on tv shows. It coulda been great. I wanted to put ol’ Freddy Prinze junior in there and maybe a Julia Stiles or maybe some of the kids from Dawson’s Creek. And shit I guess Larry Clark could direct it although we’d have to ask him politely to leave out the kids jerking off and stick with murders and crap.

Well an American remake of BATTLE ROYALE 2 would have to be done by Paul Verhoeven, because that’s who this movie reminded me of more than anybody. Sure, they got references to Private Ryan and other war movies but when it comes down to it it’s more like a less sarcastic version of the great STARSHIP TROOPERS. And like Mr. Verhoeven’s work (but moreso) it is a big pissed off scream at the current state of the world crudely sculpted into the shape of a crowd pleasing genre movie.

But this one really truly won’t be released in the Americas, at least for a long fuckin time. If you haven’t heard yet, it opens with the destruction of skyscrapers. One of the survivors of the first Battle Royale has become the leader of a terrorist group called the Wild Seven who are fighting back against the adults who turned them into killers. So for the new Battle Royale act, another group of kids are given exploding collars, terrorized, threatened, and forced to suit up and go hunt down the terrorists at their island hideout. Of course, the terrorists (being the victims in the last film) turn out to be sympathetic, and this will be very uncomfortable for alot of people. But then, it’s fuckin Battle Royale 2, it oughta be uncomfortable. It never said it was gonna give you a backrub.

The other reviews you had there Harry, those guys seemed like they just wanted to see a bunch of kids going nuts and murdering each other in different ways. So I can understand why they would be disappointed, because you don’t really get that. But I was more interested in the substance of the movie. Maybe it helps that I watched it as a double feature with the state of the union address, so it was 3+ hours of unrelenting horror.

The first BR to me was about the generation gap and the inhumanity of competition among kids. This one is about war, and it is a very blunt and I think accurate portrayal of war, not in a literal type way but in a poetical type way. Think about it: the two sides are both kids, both forced into this by the older generations, both avenging wrongs that started with the older generations, fighting for things they don’t even fully understand. The terrorists even have little kids fighting with them. I don’t even think it’s about generations necessarily though, I think the adults are the powerful and the kids are the powerless. And the powerless kill each other off in the name of the powerful, who hide in their control rooms and send in the cannon fodder when they need something done.

Hey how bout them hobbits man, i liked that new one. Oh wait that’s kind of off topic though.

You could definitely argue that it is irresponsible to show the terrorists in such a positive light. But symbolically I think it has some truth to it, that both sides are basically the same but with different backgrounds and circumstances and what not. And all they know how to do to solve problems is shoot shoot shoot and blow shit up and shoot some more. And despite the optimistic ending I think it is clear during the rest of the movie that all this fighting could never lead to victory for either side. It’s like in that old movie, I think it was called FERRIS BUELLER’S DAY OFF, where the computer is about to blow up the world and then it goes, tic tac dough is a strange game, the only way to win is not to play.

Or whatever. You know what I’m talking about. They’re not accomplishing anything. Meanwhile they kill kid after kid after kid after kid. Like in BR1 they list the kid and their number on the screen each time they die, and it becomes numbing. But this time I couldn’t help but compare it to watching the news every day and seeing which young american soldiers died in a mortar attack or a suicide bombing or a helicopter crash today. They might write their name on the screen and maybe show a picture if they’re lucky, but they’re like a blip in a video game, or like the kids in this movie. You don’t really know about their life you just know they’re one of the 500 who have died so far.

Sure, alot of movies say that war is hell, and try to depict it more true to life than this one does (or with giant bugs), but you can tell that this one really means it. There are so many parallels and references to current world affairs that a lot of people, especially americans, might feel their ears burning. I mean what are the Wild Seven if not a more enlightened and prettier version of our famous collection of blowbacks from Timothy McVeigh to Saddam Hussein to the mujahadeen? There’s even a scene where a character seems to be looking directly into the camera talking right to us. I wanted to apologize to the dude.

Now, it’s not a perfect movie like, say, the two BLADE pictures. Like BR1 or ALIEN 3 I had a hard time keeping track of all the characters, and it’s hard to stay involved in a story where so many of them die before you know anything about them. It may be slightly too long and some of it may be confusing (the subtitles on the version I saw were almost worse english than mine, so that was probaly part of the problem). But for me anyway, the movie made up for all that by pushing the audience to the limit. Appropriately for the subject matter, it is really fuckin violent. And you get two for the price of one because the collars are rigged up so that if one kid dies, his or her partner’s head blows up. For a while it seems like the whole movie will just be non-stop mayhem. But I love the hugeness of the story. I mean, a movie where a group of school kids are trapped on an island and forced to murder each other for their country is pretty edgy. A movie where the kids actually take up arms and go to war with the adults who screwed them – that’s even better. The whole feel is pretty epic and it constantly surprised me with how far it was willing to go. (One exception was when the government sent in the army – I thought it would’ve been more vicious if they sent in a new group of kids, but oh well. Maybe too obvious, what the fuck do I know.)

Anyway I’ll leave it at that but I just wanted to say that it’s not the pile of shit you heard about and if you look for some of the same things in movies that I look for I bet some of you newsies out there will really love it.

and fuck the rest of you

just kidding about that last one though, let’s all love somebody why you gotta fight everybody.

Thanks, Vern. I think Harry just saw this one the other day. He called me up, ranting and raving about it, and I think he mentioned that he was planning his own Texas-based suicide cult as a result. We all know how well that’s worked out in the past, so I fully expect this will be “Moriarty’s Ain’t It Cool News” site by this time next year.

Kenta Fukasaku Kinji Fukasaku
This entry was posted on Thursday, January 1st, 2004 at 7:13 am and is filed under Action, AICN, Drama, Reviews, Science Fiction and Space Shit. You can follow any responses to this entry through the RSS 2.0 feed. You can skip to the end and leave a response. Pinging is currently not allowed.