Usually I avoid Olympia. I know it’s our state capital, it once had a fine brewery and they got lots of college kids who brag because the rock band Sleater-Kinney was named after a street they still have near there. But I mean come on. The street isn’t even that good. In the downtown area the buildings are too far apart, and everything is closed. At least on Sunday. Anyway today they finally got a reason for me to go there: ON DEADLY GROUND. 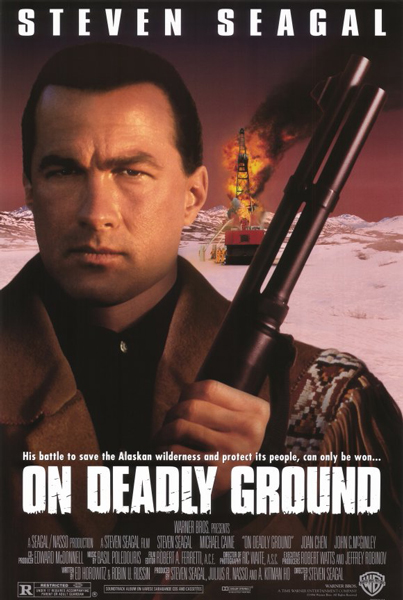 Now if you know me, you know I wasn’t gonna miss ON DEADLY GROUND showing in a film festival, even if it was on the other side of the god damn planet. ON DEADLY GROUND is a unique specimen among ’90s action movies, with an admirable spirit of cornball politics you don’t usually see anymore, if you ever did. I think of it as a loose remake of BILLY JACK, transported to an oil rig in Alaska, and without all the hippie girls strumming guitars. The protagonist, Forrest Taft, is an ex-CIA badass who puts out fires for an oil company. Like Billy Jack, he is a white guy who has appointed himself as the defender of Native American culture and dignity, and he preaches non-violence but always finds himself having to throw guys through windows and shit. The movie also has BILLY JACK-like unruly town meeting scenes where natives angrily yell about various outrages, but to quote Senator Robert Byrd, they “might as well be talking to the ocean.” And like Billy Jack, Forrest Taft is injured and taken in by Native American healers who perform a ritual with him and tell him what his spirit animal is. But in this case they are eskimos and – here’s the twist – instead of a snake, he’s a bear.

See, that makes it totally different. Also there’s a scene where he gets bit in the balls by a dog.

The villain of the piece is Academy Award Winner Michael Caine as an evil oil executive in the style of Dick Cheney. The supporting cast includes acclaimed director Joan Chen as an Ignuit activist and Academy Award winning writer Billy Bob Thornton as a henchman. This was pre-SLINGBLADE but he actually tries to deliver a performance and develop a character in the three parts where he has lines.

R. Lee Ermey also appears as a mercenary hunting Taft, and he gets a couple ridiculous lines about how badass Taft is, in the tradition of the character Colonel Trautman in FIRST BLOOD saying, “He’s trained to eat things that’ll make a billygoat puke.”

But the real attraction here is first-time director Steven Seagal, who also stars as Taft. I don’t know if you boys are familiar with Mr. Seagal’s other work, such as MARKED FOR DEATH and ABOVE THE LAW and OUT FOR JUSTICE and other movies with those same type of titles. He fights in what I call a Dolemite style, which means that he’s kinda fat and slow but they pretend he’s beating everybody anyway. He doesn’t rhyme like Dolemite does, which is the main reason why he is as not as respected, but he does play guitar in some of his movies and he sells mystical oils on the internet.

You know who he is Harry, he was the guy in EXIT WOUNDS. Not DMX – the guy with the pony tail. I think he was the main guy. Anyway ON DEADLY GROUND is his best and most personal work to date. Unfortunately I didn’t get to see it on its original release. Because of personal troubles in my life, I was not available at that time. So I was pretty excited to see it on the big screen, on film, for the first time. Turns out for this screening they were projecting off a dvd, but here’s why. The picture was presented by three guys, David Cross, Bob Oedenkirk and another gentleman whose name I did not catch, who introduced himself as “legitimately a Steven Seagal fan” and later pointed out, “We know that he is concerned with Native American issues, because of his jacket.” These gentlemen, I’m not sure if they are film historians or what, I guess they’re on a cable program called “Mr. Show.” I didn’t catch which one was Mr. Show, I think it was the bald guy. Anyway they did a running commentary throughout the show, pausing to make comments, rewinding the good parts to watch them again and fast forwarding through the boring parts where helicopters land and shit.

Needless to say if you’ve seen this before, there was alot of rewinding during the scene where Seagal humiliates Mike Starr in a bar and then asks him, “What does it take to change the essence of a man?”

Later he asks Michael Caine, “How much is enough?” (referring to money) and later “What do you say to a man with no conscience?” So this is a movie that asks the important questions, in a very direct manner.

Now to be frankly honest, I felt that Cross and Oedenkirk were not completely respectful of Seagal’s picture. In a way, I think they were making fun of it, in my opinion. During most of the vision quest sequence, for example, Oedenkirk was buckled over laughing, and he paused it just to say, “I haven’t seen anything that funny in a long, long time.”

Still, they made some good points. As many times as I’ve seen this movie, I don’t think it ever occurred to me that this company flies in the CIA trained expert on a helicopter just to come in and push a button. Or that one of the guys Seagal beats up during the bar scene looks like he’s about 70 years old.

Oedenkirk also presented a good theory about why Seagal is an interestng figure. He says that most people think making it in Hollywood is all about politics, connections, who you know. He gave examples of how people ask him who he knew at HBO to get a show, or if he had to audition, etc. But he feels that the entertainment industry is just like any other business, that there is some of that going on but mostly if you get really good at what you do and build a reputation then you get jobs, and there are a million people in Hollywood who know somebody and pass them their crappy script but they don’t get jack shit out of it, because their script sucks. But Seagal, he says, really IS that cliche – he was Mike Ovitz’s Aikido trainer, and Ovitz called in some favors to get him an action movie, and next thing you know Seagal is considered an official movie star so he makes lots of money and gets to make movies every year and pretends he used to be in the CIA.

They passed out some literature for more background on Seagal. I didn’t get a copy but I know one of them was the recent Vanity Fair article, which is great. There is an anecdote in there about somebody finding Seagal in his trailer crying.

“Oh, I was just reading the most beautiful script I’ve ever read.”

The article doesn’t say which script he was reading, but it does mention that he wrote a movie about AIDS, and how the CIA invented it to kill blacks and gays. For some reason, none of the Hollywood studios were interested. But that sort of sums up what is cool about Steven Seagal, and about this movie. Yeah, I know, he’s a corny asshole with a pony tail, who co-opts other cultures to give himself an exotic image, who can’t really fight all that great, who says he is the reincarnation of a buddhist monk named Rinpoche, and who makes laughable movies. And as laughable as his movies are they’re never as interesting as Van Damme’s surrealist period with Tsui Hark (DOUBLE TEAM (1997), KNOCK OFF (1998).) Some of them are kind of boring.

But I mean, who else in Hollywood would try to make an action movie about AIDS as a CIA plot? Or, on a less insane level, who would make an action movie where at the end the hero makes a speech about the environment and the need for alternative fuel sources? You don’t even see that in arthouse movies. As Mr. Cross pointed out, “The sad thing is, he’s basically right. But he’s this idiotic, retarded clown.”

I really enjoyed this showing, it was a once in a lifetime event that I will always cherish. I hope Criterion will see fit to get these individuals to contribute a commentary track if and when they are able to put together a special edition of this classic enviro-actioner. Harry maybe you could use your clout to demand this from Criterion, that would be good thanks.

Awesome. Just awesome. You are the king, Vern.

Billy Bob Thornton Joan Chen John C. McGinley Michael Caine Mike Starr R. Lee Ermey Seagalogy Steven Seagal Sven-Ole Thorsen
This entry was posted on Monday, October 14th, 2002 at 9:37 am and is filed under Action, AICN, Reviews, Seagal, Thriller. You can follow any responses to this entry through the RSS 2.0 feed. You can skip to the end and leave a response. Pinging is currently not allowed.

9 Responses to “VERN Watches ON DEADLY GROUND With MR. SHOW At The Olympia Film Festival!!”